How you feel about Bobby Brown’s new memoir might well depend on how you react to this sentence, which appears midway through its jaw-dropping pages: “Let me say the night with the midget blew my mind. You can do things that just aren’t possible with an average-sized woman.”

Flabbergasted? Horrified? Intrigued? Ready to retreat to a mountaintop far from the failings of this sordid world? If you’ve reached the section of Every Little Step in which Brown discusses his tender amour with a little person, you have already read about the singer fleeing down the street in a narcotic haze, convinced that his then-girlfriend, Whitney Houston, was trying to kill him; heard about his jailhouse sexual encounter, at the age of 13, with his older sister’s friend; and learned that he accidentally made fried chicken using his drug-dealing mother’s stash of cocaine, which he mistook for flour. It’s been a trip.

“It was very therapeutic,” Brown says over the phone from Los Angeles, “to get all it out into the open. In the past seven years, I’ve lost my father, my mother, my ex-wife, my daughter. Right now is when I needed to get everything off my heart, off my mind, clear all the cobwebs out so I can get on with my life.”

That life was bracketed by a disproportionate amount of sorrow, and an even larger quantity of mind-altering chemicals. In the past four years, the one-time R&B superstar experienced the premature deaths of Houston, his ex-wife, and their daughter, Bobbi Kristina, who were both found unconscious in bathtubs, with drugs implicated in both cases.

That was the recent past, familiar to anyone with a WiFi connection, and extensively examined in his new memoir (co-written with Nick Chiles).

But the beginning of his life, before he became a boy-band star with New Edition and a solo Grammy-winning artist, was equally bleak. I ask him about the cover of Every Little Step, which is a deceptively innocent photograph of young Bobby in a tree, an image that gives very little hint of the hedonism and weirdness to come. “At the moment that picture was taken,” he says, “someone had been murdered in Boston and I was looking over the scene from the tree. I remember that moment very vividly. I’ve had that picture the whole 47 years of my life.” 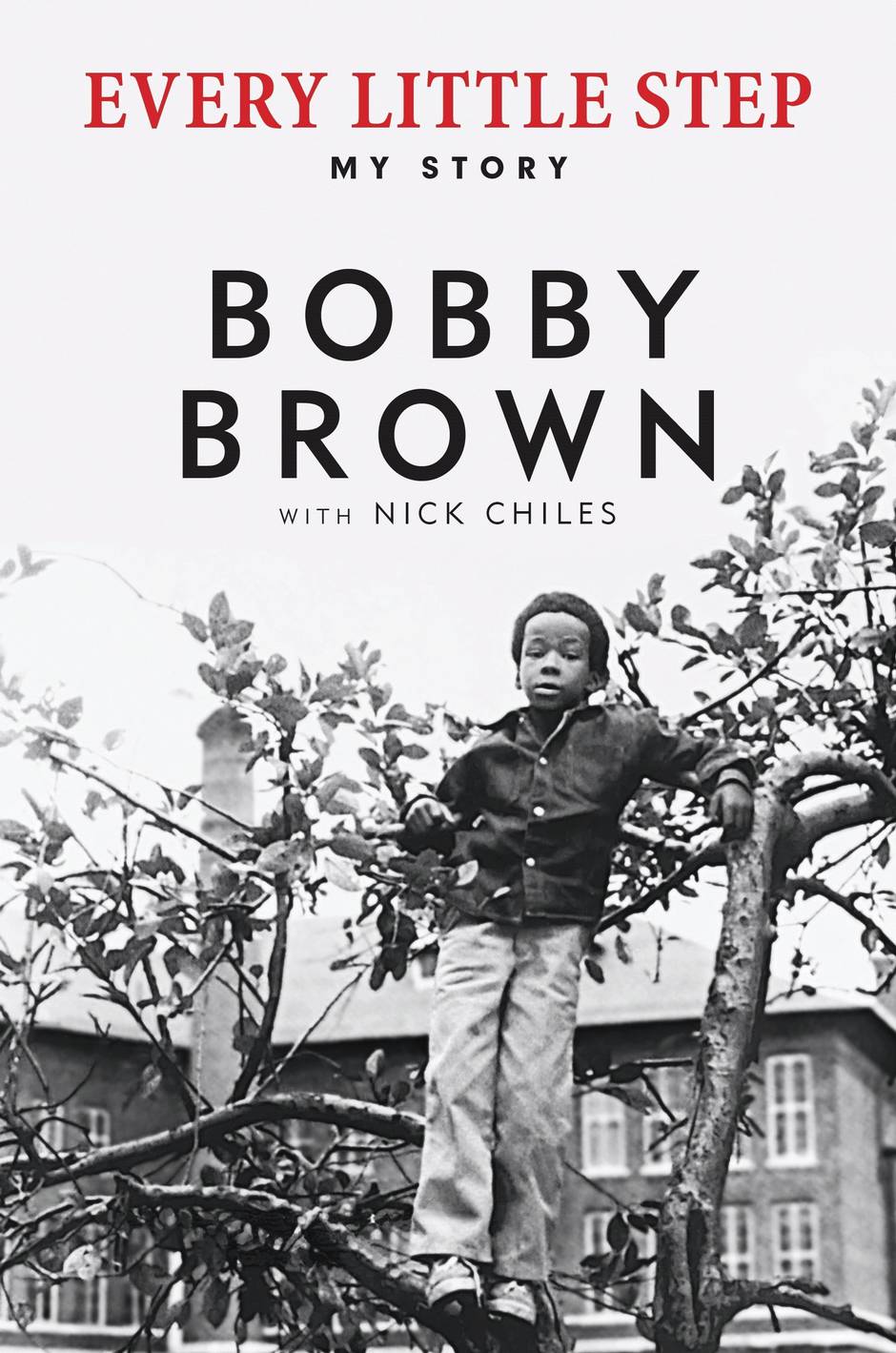 Brown’s voice is heavy, slightly weary, as he says this. He has cause to be exhausted, having crammed more decadence into the decades than the average Roman emperor (this includes, but is not limited to, having sex with what he claims was a ghost; accidentally punching Mike Tyson in the face; and having been shot, at the age of 13, by the jealous boyfriend of a girl he was dating).

Someone was murdered, and young Bobby watched the crime scene from a tree at his Orchard Park housing project in Boston. It wasn’t even the murder that most scarred him: That was the death of his friend Jimmy, stabbed while they were out stealing bikes, at the age of 12. “It was a lot of heartache and a lot of loss,” he says of his childhood. “A lot of grieving.”

It’s fair to say the local talent shows where Bobby sang and danced like his idol Michael Jackson saved him from a dire fate. He caught the eye of a local producer, Maurice Starr, who was putting together a group of teenaged singers, New Edition, whose wildness on tour belied their clean-cut image. At one point, the band opened for Rick James and the funk superstar, holding a joint in one hand, told them: “Don’t ever do drugs. It’ll kill you.”

It was not advice Brown heeded, and drugs – along with alcohol – would almost kill him. He dealt drugs before his solo career took off with 1988’s Don’t Be Cruel, which hit No. 1 on the Billboard charts. A particularly strenuous bout of partying with his friend Mike Tyson caused the boxer to lose his fight, the following day, with Buster Douglas. Brown squandered millions of dollars, and was sent to jail twice for violating probation following a DUI conviction. Drugs certainly derailed his 15-year marriage to Houston, who went from being America’s sweetheart to proclaiming “crack is whack” on national TV while the world recoiled in horror.

She blamed him; he blames her. The truth, as in all marriages, certainly lies somewhere in between. What is fascinating is that their marriage followed a retrograde narrative arc that’s a Hollywood classic: the female star who eclipses her husband’s fame, to his frustration and fury. It was like A Star Is Born, with freebase.

In 2009, after their marriage ended, Houston gave a revealing interview to Oprah Winfrey – a public humiliation that Brown dwells on at length in his book. Brown was “jealous” of her fame, Houston said, “though he’s not going to like” hearing it.

Was he, in fact, jealous of his wife’s global celebrity? When asked that question, Brown rouses himself, his voice filled with irritation. “That is absolutely not true. That is ludicrous. I had absolutely no reason to be jealous of anybody, with everything I’ve done in my life, in my career. I’m perfectly fine with myself. No, that’s just garbage.”

A worse allegation has dogged him since those years – that he was emotionally, and perhaps physically, abusive toward Houston. He admits in his memoir to slapping her; in the interview with Oprah, Houston described a disturbing incident in which she says a furious Brown spat in her face.

“I wholeheartedly dispute that,” Brown says. “I would never do something like that to someone. That’s the lowest form of anything. I really, really hated the fact that she said that.”

One of the great misconceptions about their marriage, he says, is that it was filled with strife: “We didn’t have a lot of problems. We loved each other a lot.”

In the years that followed Houston’s death in 2012, her family worked to keep him apart from their daughter, Brown claims. Father and daughter had just reconciled and were growing closer together in January, 2015, when Krissi, as she was known, was found in eerily similar circumstances to her mother: unconscious in a bathtub in her Georgia home. She was kept alive, though in a coma, for six months before she died in July, 2015, at the age of 22.

Grief provides one of the book’s few episodes of soul-searching: “How much did our behaviour – the drugs, the time I spent locked away from her – contribute to what she had become? … Were there things that she saw in the way I treated her mother that made her more likely to stay in what I knew had to be an abusive relationship? I was racked with very tough, painful questions.”

But when I ask Brown what he learned from the soul-searching after his daughter’s death, it seems, perhaps understandably, as if it’s not a wound he wants to revisit: “There’s a lot that could have been done differently. I try not to dwell on it now, because I have six children to raise and love. I have to concentrate on that.”

Now he directs his energy toward his wife, those six children and Bobby Brown Foods, which produces lines of barbecue sauce and seasonings. He tries to live mindfully. Sometimes he performs, though it’s not the same as the old times. The tour buses are gone, and the days of wine and midgets along with them.