David Bowie died. It's a sentence that feels like a contradiction somehow. As if silver died, or the rain. Bowie was once asked which historical figure "he most identified with." "Santa Claus," he answered. As Bowie receded more and more from public life, he came more and more to feel like a story someone told you – like folklore or myth. Ziggy Stardust, the Thin White Duke, Starman, Sailor, Aladdin Sane...

But Bowie was born David Robert Jones, in London, in 1947. He died of cancer, in New York, on Sunday. In between, he released 25 albums. He had two children and uncounted lovers. He was punched in the face and thereafter one of his eyes looked different. He played saxophone, mouth harp and guitar. He renamed himself after a famous knife, something to "cut through the lies and all that." He was clever and kind and stylish; he was shapeshifting and beautiful.

The last time I was falling in love, I listened to little else than David Bowie's song Sound and Vision. I drank it down like water, again and again. When you are falling in love the main thing you cannot bear is the thought that this ardour may fade, that it may leave you. Sound and Vision was my antidote. I drank it like a tonic, treating all the old dreads, soaking my heart.

I found myself remembering this yesterday, listening to Bowie song after Bowie song, Let's Dance and Five Years, me and everyone else, the whole world, as we tried to forget that eventually each of our ardours will fade, that each of them, one by one, will leave us.

More than any other record, yesterday, I was listening to Blackstar. The Globe asked me to. Bowie's last great album and his last, great album: a record that incandesces with appetite, melancholy and an unstable courage. It could not be clearer that Bowie was once again slipping his skin. Whereas 2013's The Next Day seems liminal in retrospect, an animal mid-change, Blackstar is adamant, dragonlike. It stares into death (through unlike eyes) and past it.

Blackstar opens with an incantation. "In the villa of Ormen / stands a solitary candle," Bowie intones – like the start of a ritual, smoke leaving its censer. It's a song I've already described http://www.theglobeandmail.com/arts/music/two-songs-you-need-to-hear-sean-michaelss-playlist-of-the-week/article27511615/ in these pages – "impenetrable and aglitter," a collision of sounds speared from Scott Walker, the Bad Plus, D'Angelo, PJ Harvey, Radiohead and even Lee (Scratch) Perry. Almost 10 minutes long, filled with plunging synths and stop-start drums, luscious saxophone, weird and eerie and yet at times abruptly easygoing, loveable.

The rest of the album oscillates between these two modes, the familiar and the strange, often within the same song. This continuum is reflected in the record's cast of contributors: Blackstar was made with one of Bowie's longest collaborators, producer Tony Visconti, but also a collection of near-strangers, including the Donny McAslin Quartet – a jazz combo – and LCD Soundsystem's James Murphy. The jazz musicians, particularly McAslin, a saxophonist, and his guitarist Ben Monder, lend a helpful muscularity to the album's more conceptual material – although the bulk of Blackstar feels impressionistic, lyrical, two of its weaker songs ('Tis a Pity She Was a Whore and Sue) were inspired by a 17th century play.

The record's lynchpin is Lazarus. On release-day this ballad seemed ominous, plaintive. This week, with the revelation of Bowie's 18-month cancer fight, Lazarus is absolutely triumphant. Against a repeating series of three guitar chords, an electrifying sax solo, Bowie sings the stricken song of a man who's "up in heaven / [with] scars that can't be seen." But that line's obscurer than it seems: as the song goes on, Lazarus confuses the listener's understanding of which precipice the narrator's singing from. Is Bowie a phantom in the afterlife? A jumper on a ledge? A follower reborn? "Look up here, man, I'm in danger," he pleads. "Dropped my cell phone down below." Bowie isn't merely singing his own death – he's singing on past it.

In a statement published Monday, Visconti said that Blackstar was Bowie's "parting gift" to his fans. At times this seems undeniable. "I'm dying to / I'm dying to," the singer repeats against Dollar Days' riffs. "Don't believe for just one second I'm forgetting you." Meanwhile, Girl Loves Me feels like a coded message, wolfish and prowling, to anyone has ever wanted David Bowie to devour them. The lyrics are written in a semi-gibberish slang – part Clockwork Orange, part Polari – and flushed with lust. "Hey cheena..."

But I'm not convinced that Bowie would have wanted us to greet his final work as a going-away present. I'm not sure he ever understood his work as a big, welcoming tent, somewhere for everyone to gather at once. "The coming together of people I find obscene as a principle," he told William Burroughs in 1974. "It is not human."

Because what makes Bowie's songs so very special – all of them, from Rebel Rebel to Ashes to Ashes, from Sound and Vision to Lazarus – is the way they sing their isolation. They are birds of paradise, set apart and standalone. Each one is the work of its own unique subject – its own unique Bowie. Each awaits a different listener at different times, uncompromising and proud. Each song seems formed from its own rib.

Bowie never attempted to make music for everyone. He strived to write the songs of himself. That very distinctness is what makes his work so precious. None of us is alike, but we can be thrilled by each other's difference. By understanding that each of us feels alone, each of us becomes a little less lonely.

In that same interview with Burroughs, the two men talked about "black noise" – infrasonic chords that destroy a city, "maim" a crowd, shattering them to pieces like an opera singer, a high note, a wineglass. It was invented in France, Burroughs said. "You can walk into the French patent office and buy the patent for 40 pence."

Bowie was thoughtful. "I wonder if there is a sound that can put things back together," he said.

He didn't find one. Or else he did. 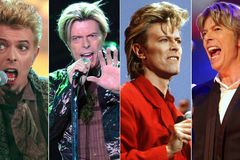 The many faces of David Bowie
January 11, 2016
David Bowie: the enigmatic hero the arts world needed
January 11, 2016
Follow us on Twitter @globearts Opens in a new window
Report an error Editorial code of conduct
Due to technical reasons, we have temporarily removed commenting from our articles. We hope to have this fixed soon. Thank you for your patience. If you are looking to give feedback on our new site, please send it along to feedback@globeandmail.com. If you want to write a letter to the editor, please forward to letters@globeandmail.com.
Comments