In the forward to Stuart Berman's 2009 chronicle of the Toronto-based indie-rock band Broken Social Scene, co-founder Brendan Canning wrote that the group's history of "uncertainty" had been both a blessing and a curse, and that high drama is appealing, damn the cost.

Now, however, there's a new firmness to Broken Social Scene. The band recently released its third album, Forgiveness Rock Record, a disc considered to be its most cohesive yet. The "sprawling collective," as it is so often described in the press, has stripped itself down to a core six-piece band, solidifying an outfit that still welcomes the guest spots (in studio and on stage) of such talented alumni members as Jason Collett, Leslie Feist, Amy Millan and Metric's Emily Haines and James Shaw.

So the band, which collapsed under its own weight in and around 2006, has its house in order. As co-founder Kevin Drew puts it: "We've put the certainty back into the Social Scene."

Forgiveness Rock Record was one of the 40 nominated albums on the Polaris Prize long list announced this week. The band, which has completed the first leg of an ambitious international tour, will headline Saturday's rock festival on Toronto's Olympic Island. Next week sees the release of This Movie is Broken, a feature film directed by Bruce McDonald ( Hard Core Logo, The Tracey Fragments) that sets a fleeting love story against the backdrop of a Broken Social Scene concert, filmed last July at Harbourfront Centre. And early next month the next leg of the tour starts, beginning in France and ending more than three month's later in Los Angeles.

Is the unpredictable band up to getting back into the rock-'n'-roll grind? It would seem so, says Drew, sitting on a picnic table bench in a windy Toronto park. "We know it so well by now. We know how to do it, and we know how not to do it."

The film, written by McDonald and Don McKellar, isn't necessarily about Broken Social Scene, but the buoyant concert sequences are revealing nevertheless. Amid the big music there are numerous gentle moments, including a spot where Haines, one of the group's long-time quasi-members, says "I miss my friends."

Friendship, in some ways, is what both Broken Social Scene is about and what This Movie is Broken is about. Or, more like it, knotty friendships. "I imagine being in that band can be very complicated, very political," director McDonald, a hard-core BSS fan, told The Globe and Mail. "There's a lot of history."

Berman's book on the group, This Book is Broken, delves into the history, ending with an epilogue that reaches the conclusion that the only certain thing about Broken Social Scene is that everything about them exists in a permanently temporary state. On Forgiveness Rock Record, the softly wistful ballad Sentimental X's has Haines, Millan and Feist singing about the transitory nature of relationships. The film This Movie is Broken centres on childhood friends who reunite, struggling to enjoy an ephemeral love affair.

Asked about the title of the record, Drew, who has a thing for words which begin with "F," explains that forgiveness is at the core of the band's longevity, shaky as it may be. "We spoke a lot when we were making this record," he explains, lighting a cigarette. "We're a huge group of friends who have been through a lot together. And the reason we've remained together is because of that word - forgiveness."

Drew describes the album as a "positive, happy record, with dark lyrical edges to it." It's the band's first album in five years, and it follows a pair of solo albums from Drew and Canning that were recorded with various Broken Social Scene colleagues. The band is an uplifting rock band, no doubt, but there's a mellow, ambient and thoughtful side to their sound as well.

"It's the kind of music that makes you want to visit your ex-girlfriend," Drew sums up, "or call your grandmother."

It's also the kind of music that makes you want to ask for, or grant, forgiveness.

Broken Social Scene, with Pavement and Band of Horses, headlines the Toronto Island Festival on Saturday. 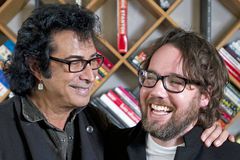