A Canadian virtuoso flutist says that his priceless collection of flutes was destroyed by U.S. customs officials who mistook the instruments for worthless bamboo.

"When my baggage didn't arrive, I called and they told me my 'agricultural products' were destroyed," Boujemaa Razgui said in an interview.

A spokesman with the U.S. Customs and Border Protection challenged the musician's story, however, saying his unclaimed baggage consisted solely of green bamboo canes more than one metre in length.

Under U.S. law, it is illegal to import bamboo that is not split and dried because of the risk of spreading crop diseases. The official said no dried bamboo or instruments were seized or destroyed.

Mr. Razgui, who specializes in North African and ancient music, makes his own instruments by hand to ensure authentic sounds for different ethnic musical genres and time periods.

He said that when he flew from Madrid to Boston, via New York, on Dec. 22, he had 13 flute-like instruments in his baggage – 11 nays and two kawalas – along with dried raw bamboo to make more instruments.

He said his bags did not arrive at their final destination. Customs officials said the bags were unclaimed in New York, so they were searched and the bamboo was discovered.

When Mr. Razgui went to the airport the next day to retrieve his bags, he was told the "agricultural products" he was carrying had been seized and destroyed by customs officials at John F. Kennedy airport in New York.

Mr. Razgui insisted that the bamboo he was carrying was dried and legal to import, and that it was impossible to confuse the instruments with raw bamboo.

"I've been doing this for 26 years – travelling with my instruments and material to make instruments – and nothing like this has ever happened," the musician said. "They never gave me an opportunity to explain."

Mr. Razgui immigrated to Canada from Morocco in 1987 and built an international career while living in Montreal. He moved to Boston in 2000, where he performs regularly with The Boston Camerata, a renowned medieval music ensemble.

The flutist said the nays and kawalas that were destroyed were not insured – but they are invaluable.

"These instruments are priceless to me. I make them with my own hands and I can't make a living without them," he said.

Norman Lebrecht, a London-based cultural commentator who initially posted the story on the popular classical music site Slipped Disc, said the musical community is outraged by the actions of customs officials.

"A swell of outrage is rising among his musician friends," he said.

Mr. Lebrecht quoted one ensemble director as saying: "I can't think of an uglier, stupider thing for the U.S. government to do than to deprive this man of the tools of his art and a big piece of his livelihood."

Mr. Razgui is not the first musician to encounter problems entering the U.S. with musical instruments. Regulations about ivory and endangered wood make it necessary for many musicians to carry legal papers outlining the provenance of instruments such as pianos and guitars to avoid having them confiscated and destroyed.

Why some bands relish the chance to revisit old albums and ‘fix’ wrongs
December 25, 2013 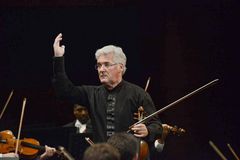