It's early Saturday afternoon at the Scotiabank Theatre in Toronto, and soprano Layla Claire is quietly clapping for her friends and heroes on the screen, wondering aloud why no one else is doing the same. I clap along with her out of solidarity, though Renée Fleming isn't going to hear our little ovation through the screen, from her position in a tree on the stage of the Metropolitan Opera in New York.

Claire is on a break from singing Fiordiligi in the Canadian Opera Company's current production of Mozart's Cosi fan tutte. The 31-year-old Canadian is probably the only person in the room who has been in a Met opera broadcast as many times as she has seen one. She appeared in the simulcast of the baroque pastiche The Enchanted Island two years ago, and her Met debut, as Tebaldo in Verdi's Don Carlo, hit the big screen in 2010. That was especially nice, she says, because it meant that all her family in British Columbia could see her first Met outing without trekking to New York.

Keeping up with her as her career takes off could be more difficult. Claire's radiant lyric soprano and eloquent Mozart style are the big revelations of the COC's Cosi, at least for anyone who hadn't caught her well-received performances in New York, at the festival of Aix-en-Provence in France, or in Vancouver Opera's revival, last season, of its First Nations-themed The Magic Flute. Her calendar next year includes several role debuts at important opera houses. It doesn't hurt that she is a very physical, dramatically engaged performer who looks good on the video cameras that are increasingly taking opera out of the theatre and into the movie house.

"They don't ask you to adjust your performance at all," she says of the Met broadcast directors, who include Canadian Barbara Willis Sweete. "But of course you're aware that there are cameras everywhere. There are some on a track on the very edge of the stage, where the prompter is, and they zip around really quickly, like little robots."

The show screening on this particular Saturday is Rusalka, Dvorak's 1900 treatment of the recurrent Romantic fantasy about a supernatural female who falls in love with a mortal man. The cast includes two other Canadians – bass-baritone John Relyea as the Water Sprite and mezzo-soprano Julie Boulianne as the Kitchen Boy – and the conductor is Montrealer Yannick Nézet-Séguin, who also conducted the Met broadcast performance of Don Carlo. But for Claire, the highest star in this enchanted firmament is definitely Fleming, who sings the title role.

"I have never been star-struck like I have been with Renée Fleming," Claire says. During her three years in the Met's Lindemann Young Artists Development Program, she went to every Fleming performance and rehearsal – "anything I could sneak my way into. Then after a Carnegie Hall recital, a friend introduced me to her, and she said, 'Oh hi, Layla, how are you?', because she had seen me in the dress rehearsal of The Bartered Bride. I almost died, that she knew who I was. I lost my ability to speak, and mumbled something incoherent, like 'You're amazing, I've loved you my whole life, la la la…,' and my friend kept elbowing me, like, 'Pull it together.'"

In every other way, Claire seems to be pulling it together extremely well. Mozart is her main man operatically, though she has also performed baroque opera and contemporary work, including a 2008 production of Osvaldo Golijov's Ainadamar at Philadelphia's Curtis Institute, where she studied in the opera program. Next season, she's doing several 20th-century operas in English, though the only one I'm more or less allowed to mention is still just an open secret: the Met's production of The Rake's Progress, in which she will play Stravinsky's Anne Trulove.

"I could not have planned it better," Claire says of the opportunities that are coming her way. "All of the things I'm doing are things I love, and have always wanted to do. My voice matches my emotional personality and my aesthetic, and the music I'm drawn to is music that suits my voice. I'm very fortunate that way – it doesn't always happen like that."

She grew up in Penticton, B.C., an athletic girl with four brothers who first got the idea of taking singing lessons from a girl in her gymnastics class. After high school and umpteen Kiwanis Festival competitions, she studied voice and opera at the University of Montreal, then Curtis, then the Lindemann program – nine years of university in all, and three as an apprentice member of the biggest opera company on the continent. She has been singing in staged opera since she was 18.

Like many opera singers, she lives out of a suitcase, "though I sort of live in Berlin. I have a boyfriend there [American baritone John Chest]," she says. "I pack for three or four months at a time, and off I go, and then come back and change my winter boots for summer shoes." Between shows, she's likely to be studying other roles, for other productions to come. But one thing she doesn't do much is listen to or watch her own performances.

"I'm so highly critical of myself, I can't really enjoy my performance," she says. "I just think that everything I did, I wish I had done better." She'd much rather watch Renée Fleming up on that big screen, in what turns out to be a wonderful broadcast – though odds are good that we'll be seeing Layla Claire there again soon.

Royal Conservatory on a mission to recover suppressed works
February 14, 2014 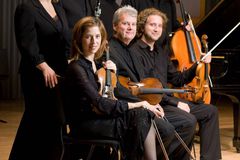 Cosi fan tutte: Atom Egoyan adds his own signature to the canvas
January 20, 2014 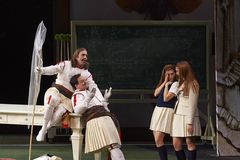 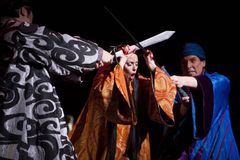 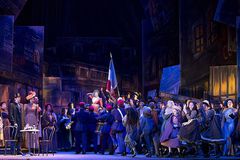 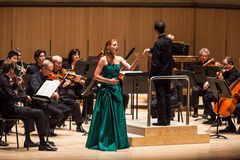 Papageno takes on Rocky Balboa as Metropolitan Opera simulcasts come to the cinema
January 2, 2007
Follow Robert Everett-Green on Twitter @RobertEG_
Report an error Editorial code of conduct
Due to technical reasons, we have temporarily removed commenting from our articles. We hope to have this fixed soon. Thank you for your patience. If you are looking to give feedback on our new site, please send it along to feedback@globeandmail.com. If you want to write a letter to the editor, please forward to letters@globeandmail.com.
Comments