You could say that Wednesday's performance with the London Symphony Orchestra is the one Canadian violinist Yi-Jia Susanne Hou was born to play.

It will be her last time on stage with a rare $6-million violin crafted in 1735 by famed Italian violin maker Giuseppe Guarneri del Gesù, and once played by the great Austrian violinist and composer Fritz Kreisler. It has been in her care for more than four years, on loan from a program that matches exquisite old violins with exquisite young players. And she will perform Beethoven's 1806 Violin Concerto in D Major, Op. 61 – the same work, with cadenzas by Mr. Kreisler, that her father, in one of China's first Western classical music concerts after the Cultural Revolution, performed the night she was born.

Ms. Hou performs as a soloist with orchestras around the world, and came to the Stradivari Society after reaching the six-year maximum on a Guarneri from the Canada Council's musical instrument bank. In Chicago, Ms. Hou played more than 20 violins without reading their labels – and once again selected a Guarneri – the one discovered by Mr. Kreisler, which was acquired in 1924 by Lady Mary Portman, an English aristocrat who loved played the violin. Thus its name.

Legend has it that if the violin is not with the right person, it will not rest calmly on their shoulder, said Karen Arrison, who owns the violin with her husband, Clement. "She's a bit of a vixen, this instrument. She's got a little mind of her own, and she really needs to be properly fit with the musician."

When Ms. Hou auditioned for the Buffalo couple in 2009, the instrument did not shake. "It was joyful," Ms. Arrison said.

Ms. Hou has travelled the world with the Mary Portman – Miss Mary, she calls it. But the loan, extended once, is ending. Ms. Hou is bracing herself.

"I feel instruments very deeply; they're like people to me and I think it's very much like falling in love. And so when you meet an instrument that first day, it's almost like a first date. You get to know them through your relationship and then … they tell you: You can't see this instrument any more; you have to go date somebody else."

She mentioned the separation last summer to venture capitalist Loudon Owen, who then listened to her music. "I think it's one of those few times in life where you feel your feet lift off the ground," he said. He plans to document Ms. Hou's goodbye to Miss Mary. The performance takes place on Wednesday with Andreas Delfs conducting.

Her parents, Alec and Yvonne, were violinists in China. They moved to Canada when Susanne was three, first to Toronto, where Yvonne worked in a sewing factory and Alec took odd jobs such as scraping ice off pipes. Next was Thunder Bay, where they joined the local orchestra. They are now in Mississauga. When Ms. Hou studied with the legendary violin teacher Dorothy DeLay in New York, her parents drove 10 hours there, waited while she had her lesson, then drove home. They did that every two or three weeks for five years. Later, Ms. Hou moved to New York to attend The Juilliard School. Mr. Hou makes bows for his daughter.

Before leaving China, Mr. Hou was among the first to perform Western classical music after the Cultural Revolution. He was the soloist at a sold-out concert in Shanghai on Dec. 9, 1977.

"In the middle of the second movement, I came into the world," Ms. Hou said. "I guess I didn't want to miss the occasion, because I was three weeks early."

"As soon as I found out the history, I made a silent promise to myself that before I had to give up this instrument … that I would record this very special piece."

After the London performance, which her parents will attend, Ms. Hou will head to Mississauga to play Miss Mary for them one more time at home, then return it. "At first you go through all the stages of loss, like grief and anger, frustration, denial," she said. "But what I've discovered and what I understand now is that we all have to let them go. Otherwise I would never have gotten that instrument to begin with if someone else didn't give it up."

"It's so hard," said Ms. Fushi, now assessing applicants for the violin's next player. "It's stated so clearly up front this is not a lifetime loan; there's a specific term. But it's a tough goodbye."

The Banff Centre’s ambitious plans for the world stage
November 24, 2013 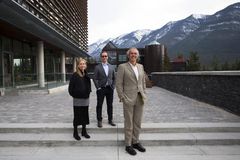 Why are bold revisions of the classics less contentious in ballet than opera?
November 14, 2013 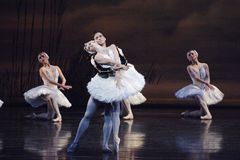 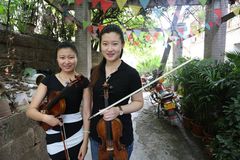