At last year's Polaris Music Prize gala, Carly Rae Jepsen and her guitarist Tavish Crowe performed Your Type with members of the Toronto Symphony Orchestra. The song, usually a pop banger, was transfigured. With the recording's throbbing bass and drums traded away for a string quartet and acoustic guitar, it hewed closer to Jepsen's aching-heart lyrics than the source material ever did. By the time she sang the song's climax – a repeated "I'd make time for you," original present tense traded for wounded conditional – the stripped instrumentation turned its distant longing into real anguish.

Some time after, she got a phone call. Like Your Type itself, the gala performance had left the orchestra feeling a little yearning; they wanted to perform a full concert of songs from her Polaris-shortlisted 2015 album, Emotion, and wondered if she'd like to join them.

Jepsen is perhaps history's most vocal proponent of bold phone calls. Her breakout 2012 summer smash, Call Me Maybe, was once the biggest song in the world. She had a single question after hearing the pitch: "Are you kidding?"

In little under a decade, Jepsen has transformed from an acoustic-slinging Canadian Idol contestant to global pop-smash bestseller to Broadway Cinderella to subversive synth-pop queen. She's made a career out of career reinventions.

On Saturday, she'll reinvent her most revered record and her greatest hits with the Toronto Symphony Orchestra at Roy Thomson Hall.

For the 31-year-old British Columbia-born star, it's a dream come true, a chance to glimpse her own work from new angles. "With an orchestra, I think the emotions could fly even higher," she says in a phone interview from Venice before flying to Toronto for rehearsals. "It's getting to a less pop-and-polished place, a more raw and serious one – more authentic to what those lyrics are saying."

Just like with Your Type. This has been a constant quest across Jepsen's many transformations: She's constantly trying to refine her ideas, getting closer to the core of the emotions they should exert, shrugging off other consequences.

Naming her last proper album Emotion was nothing short of a hint at that. After Call Me Maybe became the bestselling song of 2012 and the full-length Kiss was rushed to the public, the 2015 follow-up marked a pair of personal turns. It leaned into Cyndi Lauper-inspired eighties synth-pop, a danceable masterwork, while Jepsen abandoned Call Me Maybe's teen-crush sentiments in favour of real, pained, adult longing.

Though the shift was cheered on by various vocal slices of society – including music writers and LGBTQ fans – it hardly had the commercial impact of her breakthrough single, peaking at No. 16 on the Billboard 200 albums chart.

Jepsen, for her part, seems less concerned about stardom and industry yardsticks than finding people who connect with her work. "I never really think in terms of how to market or sell something," she says. "… I've been really lucky with Emotion, just to meet so many incredible people who came out of the woodwork."

Those who emerged tended to veer into the fanatical. They intensely watch her every move, every B-side, every Instagram post – and now, her sold-out TSO collaboration, conducted by Lucas Waldin and part of the orchestra's sesquicentennial Canada Mosaic series.

Charged with reinterpreting Jepsen's work was Toronto composer Christopher Mayo, who had happened to arrange Your Type for string quartet, though perhaps is best known in pop spheres for his previous Polaris gala arrangement of Drake's Know Yourself.

He did not walk into the situation blindly; he was already a fan of Emotion. "The opportunity to get inside those songs and pull them apart – it's not that often I get the chance to really intimately work with other peoples' music in this kind of way," he says.

After Jepsen accepted the TSO's offer, and Mayo signed on as orchestrator, she and her guitarist Crowe proposed a setlist with a "dramatic" arc to build up and down from vocals-and-guitar to full orchestra. After a few months of discussions, Mayo began retooling the songs in April.

Your Type was already ready: for the gala, he'd stripped away the song's dense production to its basic parts, adding back familiar flourishes like the chorus's recurring synthesizer hook, replaced with swipes of violin. Some of the proposed setlist simply made sense with an orchestra; anyone who had a functioning eardrum in 2012 knows Jepsen is no stranger to synth strings.

Others in her catalogue, such as Boy Problems, proved more difficult for Mayo. Its funk-style slap bass was a few notes too low to translate. "Orchestras can get really muddy and unresponsive down there," he says. "The problem with a lot of pop music is really the focus on super, clear, loud, low bass frequencies; you just can't really access that stuff in the same kind of way. … If you stick it on a bassoon, it's not the same thing."

Jepsen's synth-pop catalogue, he says, lends itself well to an orchestra – especially compared with guitar-focused songs, which require translating strummed sounds into sustained ones. Each song with the TSO will get its own treatment: some more faithful to the recordings, others blown up and rebuilt. And each is a chance, Mayo says, to cast new light on the melody and lyrics, finding fresh nuance. "The direction the production took them is not the only direction they can go," Mayo says.

Jepsen spends a lot of time with professional songwriters, many from the pop mecca of Stockholm, who have mastered the intricacies of insatiable hits. "It's not just about 'Here's a great thing, let's put the most simple, basic chords underneath it' – it's trying to find ways to have them link together, have them be constant ear candy," she says. Now she'll get to see how those intricacies translate with nearly 60 musicians behind her. "I feel like having real instruments being able to showcase that will be really cool."

Her writing process delivered more than 200 songs for Emotion. Eight of them landed on Emotion Side B, which this week was named to the 2017 Polaris Music Prize's long list of finalists. Another was Cut to the Feeling, a balls-to-the-wall earworm that feels like it's all chorus. She finally released it last month for the soundtrack to Leap!, an animated film in which she also stars. Curious fans who used song-naming app Shazam to hear it found a treat in its metadata – that it purportedly belonged to an album called Spread Love.

Music-news sites everywhere held it up as a sign of a new Jepsen album.

"That's a surprise to me," she says, laughing, though the idea of spreading love, she guesses, "is a good message." She has, however, written about 50 songs for an eventual new album, but has no plans yet for a release. She's taking her time, working with co-writers in Stockholm, Los Angeles, wherever she lands, seeking out new perspectives on her work.

Even reinventing her old music with an orchestra is another way to challenge her perspectives, to transform the expected into something different. "One of the things I've learned a lot in every session I go to – which is probably I like overwriting so much – is what do you come away with? Is this a song that you're keeping, or a lesson you learned, witnessing how other people are going at it?" 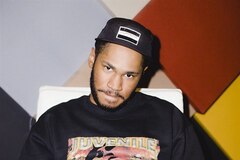 Stripped-down Bieber holds crowd of Beliebers in the palm of his hand
March 22, 2018 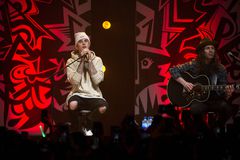 Carly Rae Jepsen’s new song is ridiculously catchy – but there’s one problem
May 12, 2018 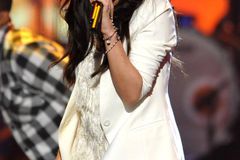