With the surprise release of Black Messiah on Monday, D'Angelo joins the elite coterie of artists who give us not what we thought we wanted, but what we need. What that is, more precisely, is elusive.

The soul icon hasn't released an album since his second LP, 2000's Voodoo – not that he needed to in order to keep his perch among the most respected R&B singers alive. ?uestlove, The Roots' drummer, said in a 2003 interview that he collaborated with D'Angelo so that "one day my kids could say, 'Wow, my Dad was a part of that.'" In the 14-year gap between Voodoo and Black Messiah came reports of drug and alcohol abuse, detailed in a rare profile published by GQ in 2012. Then a handful of concerts, leaked demos and rumours lit up the internet, culminating in the announcement Dec. 12 that Black Messiah, credited to D'Angelo and the Vanguard, was coming in just three days.

The secrecy around Black Messiah seemed at first like the PR sleight of hand reserved for marquee acts (at least he didn't use iTunes to force-feed it to us, U2-style), though its execution rivalled Beyoncé's self-titled disc last year. When Beyoncé arrived without a shred of warning, sales records were broken, the internet was consumed, and radio – still a vital distribution channel, even in this streaming era – couldn't afford to ignore it.

This was a crucial aspect of its success. Some might say a new Beyoncé album would have moved units regardless, but would the uncharacteristically torrid single Drunk In Love have taken off like it did, nearly topping the charts? Or would radio's narrow-minded gatekeepers have balked?

Thanks to her clout, she didn't have to risk it. The snap release vaulted her clean over an obstacle course consisting of label politics, radio and the critics, and delivered Beyoncé to the fans. Everyone else had to catch up.

Black Messiah's arrival came with a rope-a-dope worthy of Muhammad Ali himself. The finger-snapping single, Sugah Daddy, could have slipped comfortably onto Voodoo thanks to a lubricious bassline, rippling horn hits and that gymnastic falsetto. Nobody would have minded if D reprised his last album; some were hoping for just that, trembling with the possibility that it might be as good as Voodoo, and fearful that it might not.

Then, POW: the album opens with the quick left-right-left jabs of Ain't That Easy (snarling guitars, brittle drums like breaking glass); 1000 Deaths, a blast of black power fury; and The Charade, a pensive, accusatory shuffle. Where did that come from? The message is clear: Black America is angry – about Ferguson, Eric Garner, Tamir Rice, fill in the blank – and D'Angelo is not immune.

Side two consists of more romantic, wistful stuff, but no less passionate: the briskly-paced Betray My Heart is a lover's testament of fidelity; the environmentalism of Till It's Done (Tutu) channels What's Goin On-era Marvin Gaye right down to an acid rain reference. (I call dibs on bringing back "No Nukes." You read it here first.)

Still, Black Messiah isn't quite slow jam central. It's the sound of a worried man with a worried mind, looking back to the 60s and 70s (particularly Sly Stone and Funkadelic) to recapture lost innocence – and to channel a resurgent sense of rage. 1000 Deaths includes not just a clip of murdered Black Panther leader Fred Hampton holding forth, but also a snippet of former Nation of Islam official Khalid Muhammad denouncing the white image of Jesus as a "peckerwood, cracker Christ." Muhammad was removed from his position following controversy over a 1993 speech condemning homosexuals and Jews, one that contained a nearly identical passage to the one sampled here.

Did D'Angelo sprint through the same door opened by Beyoncé and throw a grenade into America's national conversation? He's not the first to sample NOI demagoguery (Public Enemy and Ice Cube did in the 1990s, arguably the last time the dialogue around race was similarly heated). Given that he's the son of a Pentecostal preacher with no reported NOI ties, the clip seems more likely intended as a reminder that when African-Americans' anger isn't simmering, it's boiling over. An emerging billionaire class of rappers-turned-headphone brand co-creators doesn't change the fact that black people have a lot to be angry about in 2014.

We can't know how Black Messiah, in all its varied shades of joy and sadness, would have been received if it had been flogged like a normal 'urban' record –single after single pushed to radio and YouTube, and if that failed, a quiet December release to catch corporate tax-loss season. In its present form, it might not have come out at all. So it's better this way, even if we have some catching up to do.

D’Angelo makes his long-awaited return with an energized show in Toronto
June 2, 2013 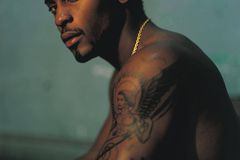 'Things have changed' for D'Angelo
January 30, 2012
Follow Dave Morris on Twitter @morrisdave
Report an error Editorial code of conduct
Due to technical reasons, we have temporarily removed commenting from our articles. We hope to have this fixed soon. Thank you for your patience. If you are looking to give feedback on our new site, please send it along to feedback@globeandmail.com. If you want to write a letter to the editor, please forward to letters@globeandmail.com.
Comments