Russia, Masha Alyokhina says, is a prison where some are behind bars and almost everyone else is under less obvious forms of state custody. Alyokhina knows about both conditions: In 2012, she was tried and jailed with two other members of the punk protest band Pussy Riot, after a guerilla performance at a Moscow cathedral, which prosecutors characterized as "hooliganism."

"The modern history of Russia is written in the courtroom," Alyokhina said, during a recent interview in Montreal. "There are really no opposition politicians who don't have criminal cases against them." She counts many friends and collaborators among the dissident artists who are in jail or facing prosecution. "It's really cynical. The so-called authorities can do whatever they want in court."

Alyokhina received one benefit from her court experience that her prosecutors did not foresee: visibility. The Pussy Riot case gave her a global platform to take further artistic action against the Putin regime, and even to launch an independent Russian web news site called Mediazona.

It also brought her before Canadian TV cameras in Moscow, for a segment of Interrupt This Program, an independent five-part series on CBC about art and artists in places under political, economic or military pressure. The current season's first half-hour episode, airing Feb. 5, profiles four Russian artists and a Canadian working in Moscow, with scene-setting contributions by Alyokhina.

Much of Alyokhina's own recent activity has been devoted to projects that dramatize the plight of dissident artists in jail or awaiting trial. She toured Britain and Australia this past summer and fall in a play called Burning Doors, which drew on the experience of performance artist Petr Pavlensky and Ukrainian filmmaker Oleg Sentsov, both jailed for activities offensive to the regime. Sentsov drew a sentence of 20 years for terrorism, though his supporters – who include Johnny Depp, Pedro Almodovar, Wim Wenders and Peter Gabriel – say the real reason was his public opposition to the Russian annexation of Crimea.

"Nobody can live for 20 years in a Russian prison," Alyokhina said. "It means death. And yet Sentsov's last words, when he was standing in the court, facing 20 years, were that we should overcome our fear."

At 28, Alyokhina is a seasoned veteran of the lopsided skirmishes between an all-powerful state and a community of dissident artists. She is blunt in her condemnation of the regime, but a gradualist in terms of how to change it.

"It's always a matter of going step by step," she said. "We had an experience of change in Russia that was not step by step, 100 years ago, and I'm not sure this is the right model."

She co-founded Mediazona in 2014, the same year she and other Pussy Riot members were whipped and pepper-sprayed on camera by Cossack guards, during an impromptu performance at the Sochi Olympics site. The news site is mostly staffed by journalists fired from official media for deviating from the government view of things.

"Mediazona covers all topics connected with freedom in Russia, police violence, political violence and political courts," she said. A prominent feature on the website is live coverage of trials of dissidents.

"In two years, we have changed the media discourse," she said. "Before us, nobody covered political courts, prisons and police violence. Now, because we are quite big, others have to cover it too, even state media. They do it in the old way, like propaganda, but they have to cover it, to be in opposition to us."

Matvei Krylov, one of the artists in Interrupt This Program's Moscow episode, says during the program that he was arrested and tortured for seven days after throwing water on a state prosecutor. Police released Krylov after his treatment became widely known, and while he speaks defiantly on camera, he also chokes up at the memory of what was done to him.

Daria Serenko and Sasha Alekseeva say they had never done anything politically before starting their Quiet Protest, in which they ride the Moscow subway, holding posters bearing the names of political prisoners or information about official repression of LGBT people. "In Russia, you're usually afraid to say what you're thinking," one of them says – hence the silent nature of the actions, which they say are intended to break through "the zone of message control."

Alyokhina was in Los Angeles the day Donald Trump was elected President, and wasn't impressed by Americans who immediately started discussing the prospects for leaving the country.

"I think this is totally the wrong direction," she said. "It's your country. If you don't change it, your opponents will."

She also rejected comparisons of Trump with Putin, saying "the difference between Trump and Putin is really big. Putin is a product of the Russian state-security service, which has a long history of repression, almost a century. Trump is just an asshole, and when people realize what has happened, they will change the situation."

She has no plans to leave Russia permanently, she said, though she lives under constant surveillance and has seen many friends imprisoned or hounded out of the country. She thinks the regime would like her to leave, too. "But it's my home," she said.

Interrupt This Program producer Nabil Mehchi said the idea for the series, now in its second year, arose during a trip he made to his native Lebanon with his producing partner Frank Fiorito. The two were struck by the artistic vitality of Beirut, a city known more in the West as a scene of political tension and military crisis.

"When a place in under pressure, a lot of interesting art comes out," Mehchi said. "The idea was to show a beautiful and inspiring side of the cities we visit, rather than what you usually see in the media."

The other cities in the series are Jerusalem, Lagos, Manila and Havana. In each place, Mehchi and Fiorito, the series director, relied on local mavens and fixers to help find three or four young artists, plus one resident Canadian, as well as someone who, like Alyokhina in the Moscow episode, could set the scene.

"The scariest one was Lagos," Mehchi said. "You're in the midst of Boko Haram territory, there are huge inequalities between rich and poor, and there's a constant risk of kidnapping." But the risk paid off, with footage that includes sequences with Nigerian-Canadian poet Titilope Sonuga.

CBC is deliberating now on whether to renew the series, which received an International Emmy nomination in 2016, for a third season, Mehchi said. Unfortunately, there are plenty more cities where artists struggle and sometimes thrive in the face of violence, poverty and repression.

Interrupt This Program's second season on CBC TV debuts on Feb. 5 at 9 p.m.

'Keep America Great': What Donald Trump and The Purge films have in common
January 19, 2017
Trump immigration order blocks Iranian director but Asghar Farhadi may yet win an Oscar
January 28, 2017 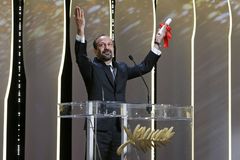 Disaster distraction: The power of film for self-care and escapism
February 2, 2017
Follow Robert Everett-Green on Twitter @RobertEG_
Report an error Editorial code of conduct
Due to technical reasons, we have temporarily removed commenting from our articles. We hope to have this fixed soon. Thank you for your patience. If you are looking to give feedback on our new site, please send it along to feedback@globeandmail.com. If you want to write a letter to the editor, please forward to letters@globeandmail.com.
Comments