Such a strange evening it was. At 6:30, the O'Keefe Centre's house lights dimmed, the chatter of the audience dimmed to whispers, and then silence.

The white grand piano waited on stage left: Fats Domino - the larger-than- life figure of the rolling New Orleans rhythms, the man who bumps pianos across stages with his belly, the man who sold 65 million records (making him second to Elvis Presley as the top-selling recording star of the 1950s) - seemed ready to take the stage for the first of last night's two concerts. Long pause.

Finally, the audience began calling out: "Come on, fat man." "Let's boogie." "Yeah, Fats." In response, out walked a smallish man with a beard - promoter Rob Bennett - to introduce the first act, comedian Evan Carter. At 6-foot-4 and 155 pounds ("When I used to go to the beach, people thought they were shooting commercials for CARE"), Carter didn't look much like FatsDomino, either.

An intermission followed Carter, and then a man carrying a horn appeared on stage, walked over to the white piano and hit an A. Somewhere off in the wings, a trumpet responded. Then, slowly, the 10 members of Domino's band, all neatly attired in dark suits and ties, wandered on stage. They were introduced by name and instrument, and then gave a lengthy overture in which they displayed their talents.

At 7:30, Fats Domino finally appeared - grand and wonderful in a pearl grey suit, pale grey tie with stabs of red, and black slippers with red stripes. He floated over to the keyboard, sat down on the piano stool, slammed his hands down on the keys and began singing, his dark growl of a voice sinking into the rolling rhythms of I'm Walkin', followed quickly by Blue Monday. Then, in the middle of Jambalaya, he walked off stage again.

For the next five minutes the band jammed, and the second drummer walked back and forth across the stage for animated discussions in one wing and then the other. The band kept playing, and when everyone had had another solo, Domino returned to finish the song. He said he'd been sitting in a draft and didn't want to hurt his throat.

From then on, it was a fairly rapid run-through of a dozen numbers, with Domino pumping away with his patented 10-digits-on-the-keyboard piano style, showing his mischievous grin from behind his microphone from time to time and giving lots of room for his band to display its New Orleans swing.

The songs were short and delivered en masse, like a line of sausages linked together: Blueberry Hill, I'm Gonna Be a Wheel, Red Sails in the Sunset, When My Dreamboat Comes, I'm Walking To New Orleans, My Blue Heaven, Ain't That a Shame . . .

Musically, nothing seemed quite to get started before it was finished, and the show had the quality of a dress rehearsal. The solos were occasionally spectacular, but there was a surprising number of sour notes in the ensemble playing and, when band members weren't actually playing, they stood around conferring like friends on a street corner on Saturday night.

Fifty minutes later, it came to a close, with the horn section wandering through the crowd playing When The Saints Come Marching In, as Domino belly- bumped the piano halfway across the stage. Those final five minutes almost compensated for the rest of the show; at least, the finale left the impression that, even if last night didn't qualify, Domino and band must put on some great shows when the mood strikes them. 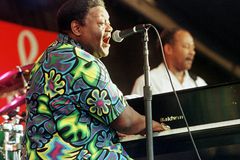