The upcoming Sigur Ros album ought to carry a warning to insomniacs: "You won't be falling asleep to this one, pal." The Icelandic group has long been revered among those who can't nod off without soothing sounds (not to mention people who, y'know, like good music). But its new single likely made more than a few fans spit out their camomile tea in surprise.

If serene albums like 2002's ( ) and last year's almost totally ambient Valtari were music for contemplating the silence of the fjords, Brennisteinn – the first sonic glimpse of Kveikur, due June 18 – is the sound of said fjords abruptly collapsing on top of you.

"There's definitely a bit of a change," bassist Georg (Goggi) Holm explained over the phone from his home in Iceland. "A lot of the stuff is rougher, it's more gritty and more aggressive. But not necessarily all of it."

Brennisteinn's low rumble of a bass line, like a creaky drawbridge being raised, announces the change, as drummer Orri Pall Dyrason lays down an ominous half-time rhythm that sounds tailor-made for stadiums. Granted, singer Jon Þor (Jonsi) Birgisson's ethereal falsetto still sounds angelic, but now it's an angel warning that you're about to descend into a most unholy place. Musically, it's as though the band's modus operandi has been inverted; instead of starting with a quiet sound and slowly moving toward a boisterous, sometimes ear-splitting peak, Brennisteinn starts out galloping like a modernized Carmina Burana before the drums fall away and reveal the quiet in the eye of the song's opening hurricane.

I asked Holm, were they worried about fans' reactions to their reinventing themselves so drastically?

"In many ways, we'll never be able to get away from our sound. It'll always be somehow identifiable as our sound. But I think even we were a bit surprised by the new material we created. It was just so different from whatever we had done. You can hear the sound is still there, but there's just something new and fresh about it.

"We did surprise ourselves when we were writing it – like, 'What are we doing?' It was completely different, but in a good way."

Holm is right, in that you really can hear the Sigur Ros magic even in the thundering cacophony. "We like sounds that are organic. I guess we're suckers for that," he says.

He explains that many of the sounds on Kveikur were created by sampling real sources and then playing them through digital controllers.

Sigur Ros's fans are no doubt as sentimental as the band, so the departure of guitarist Kjartan Sveinsson – announced last fall as merely a hiatus from touring, then officially confirmed as a true split from the group during a Reddit Q&A in late January – has been met with much breast-beating and wailing. But Holm avers that the touring group, consisting of the trio plus Holm's younger brother, Kjartan Dagur Holm, as well as a pianist known only as Obo, and eight other players on strings and brass, can reproduce the records as well, or better, than the four piece could. "The live show has never been as full and complete as it is at the moment. It's better than ever."

Sveinsson's departure might prompt fears that the band will never perfectly recapture its classic sound, and that's probably true. Yet the way Holm describes the band's working process, which makes them almost sound like a hive mind, means they will likely survive the transition.

"We don't listen to the same types of music, although we all sort of agree when we hear something that is good," Holm says. (He also reveals that they tend to blast chart pop at high volume backstage before their shows – the will.i.am single with Britney Spears, Scream & Shout, is a current favourite.)

"When we write music together, if we at some point say, 'I'm not sure about this one,' we all agree. We all have the same sense of music, I think.

"We work very well together, and we kind of have to work together, in some ways. We all have to be in the room and writing the songs together. It can't be, someone writes a song and comes into a rehearsal space, and says, 'Let's play it.' It never works. I don't think we've ever even tried it." 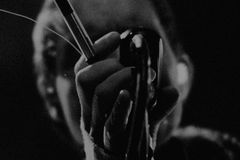 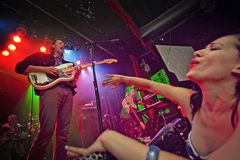 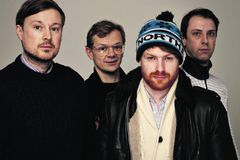