Deep into his elegiac and conceptual album Secret Path (out Tuesday), Gord Downie talk-sings hard against an insistent bass-and-drum beat and and a steel-blue synthesized mood. "I know a way that I can help you," says a raven to a boy who is cold, hungry and hopelessly lost in the wilderness. "What you can't escape, you gotta embrace."

The track increases in intensity, eventually bursting open into an orchestral rock surge. It's called Haunt Them, Haunt Them, Haunt Them, which advocates a plan for escaping a "plain, ordinary death" by way of legacy that involves an unsettling story about an injustice which very few people wanted to hear of for a very long time.

To describe Secret Path as merely the Tragically Hip front man's fifth solo album would be a tremendous feat of underselling. Its ambition is heavy; its cause, significant.

Related: Can you hear Gord Downie's call for reconciliation?

Read more: One nation under Gord: The tour a whole country followed

Recorded in the late fall of 2013, the LP of passionate message and elegant indie rock began as 10 Downie-written poems, inspired by the story of Chanie (Charlie) Wenjack, a 12-year-old boy who in 1966 died in flight from the Cecilia Jeffrey Indian Residential School near Kenora, Ont. He was walking in hopes of reaching the home and family from which he was taken, more than 600 kilometres away.

The story was first told to Canada through a devastating story written by Ian Adams for Maclean's magazine in 1967, The Lonely Death of Charlie Wenjack. The young, frail, Ojibwa Indian who loved to fish was one of about 150,000 aboriginal children placed in a national network of church-run boarding schools, where they were un-Indianed and mistreated in almost every conceivable way.

Seeking reunification with his father, the boy was walking along a railway track, which is where his body was found. "It's a story that should be told," a Canadian National Railway foreman said at the time, speaking about the unknown but not uncommon tragedy. "We tell this man he has to send his son to one of our schools, then we bring his boy back on a luggage car."

With the 10-song Secret Path, released in a deluxe vinyl version with an accompanying graphic novel by Jeff Lemire (and as a book with a download code), Downie brings attention to a national wrong and puts a name to an ugly racial mishandling.

"All of those governments, and all of those churches, for all of those years, misused themselves," Downie writes in a statement. "They hurt many children. They broke up many families. They erased entire communities. It will take seven generations to fix this. Seven. Seven is not arbitrary. This is far from over. Things up north have never been harder. Canada is not Canada. We are not the country we think we are."

The album does not rant. Produced by Dave Hamelin (formerly of the disbanded Stills) and Broken Social Scene's Kevin Drew, its warm textures are enveloping, healing and often softly cinematic. Opening track The Stranger begins with a strummed acoustic-guitar motif and sustained piano chords. It is an intimate and lovely introduction.

Swing Set rocks in a soulful and uplifting way, thanks no doubt to the Broken Social Scene sensibilities of Drew and his kick-drum heart. Chanie is on the playground, wondering whether or not to make a run for it. We hear panting and geese; Chanie takes off.

On the dreamy ballad Seven Matches (a reference to the only objects the ill-prepared fleeing boy had in his possession), Downie's voice is in its uppermost range.

Side A closes with Son, a strummed hug and a gentle guidance to one's offspring. "Even as the world convulses," sings Downie, a father of four, "don't stop wishing what you wish."

Downie wrote the words to Secret Path well before he was diagnosed late last year with terminal brain cancer. But now, with the dire prognosis in mind, hearing him sing, "Son, when you dance, I'll be on your shoulder, and you'll feel it," comes with an emotional wallop.

Side B begins with the title track, a simple and powerful piano number with a stage-worthy performance from Downie on vocals. Chanie's windbreaker isn't doing what it's designed to do, and the rain that is falling is colder than he's ever known.

By the calm and melodically quirky The Only Place to Be, a peaceful resignation sets in: "I'll just close my eyes/ I'll just catch my breath/ this is the only place to be."

Here, Here And Here is an atmospheric and poetic conclusion.

This album may very well be the last one we hear from Downie. If so, it is a graceful, auspicious walk-off. Chanie's tragedy is a symbol of a misguided social policy; his story, because of Downie, outlives him.

As for unforeseen trails, as the novelist Guy Gavriel Kay wrote, "There are no wrong turnings. Only paths we had not known we were meant to walk." That doesn't explain Chanie's story, but it says something about Downie and his own path he could not have seen coming. 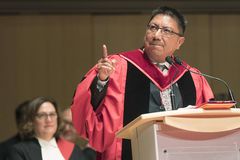 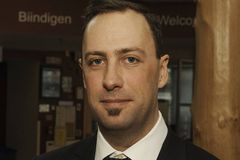