I tried to entertain myself, during the not infrequent points of Wednesday night's Nelly Furtado concert which called for supplemental entertainment, by imagining the backstage, pre-show pep talk she might have received. "Yeah, I know we had to move the show from the larger Orpheum next door and yet we haven't come close to selling out this smaller joint. Yeah, I know that you played to a more than half-empty arena last night in Victoria and yeah I know that Victoria's your hometown. But listen, you're Nelly Furtado! Get out there, plaster a smile on your face, pump your fist, dance around, and then after an hour-and-a-half you make like a bird and you're out of here."

It's unclear just how many people turned out for the show at Vancouver's Commodore Ballroom – Live Nation would not release attendance figures – but the Commodore has a capacity of just under 1000 and there was enough room that even a latecomer could get near enough to the stage for a close-up view of those signature cheekbones and piercing eyes. The bars weren't busy, the t-shirt sellers looked lonely. Whoa indeed.

I love an underdog, and I wanted to see Furtado grab the Ballroom by the horns and turn this maybe half-empty venue into one that was half-full. But from the moment she walked onstage in her sparkly tank top, dark fedora and signature hoops, and launched into the first nasally notes of The Spirit Indestructible, the title track of her new album, I had my doubts she could – or even cared to – pull it off.

Furtado, who has sold millions of albums since her 2000 debut Whoa, Nelly!, still has the vocal chops and stage presence, but the show was uneven. It took a few numbers for her to hit her stride, but throughout, there were moments of dispassion or worse. There was a strange bit where the Grim Reaper, complete with bright green feather boa, came onstage with a bucket full of bucket list wishes left by audience members. Furtado read a few, and then launched into the song Bucket List. Awkward, went on too long, didn't work. Her Be OK duet with opener Dylan Murray was anything but; he was flat – although she held it together as the audience collectively cringed.

But Furtado brought it for a high-energy, fabulously thumping version of Turn off the Light, immediately followed by a lovely played-straight Like a Bird – though the Whoa, Nelly! one-two punch came surprisingly early in the set and any momentum it might have created came crashing to a halt when Furtado leaped right into Steve Miller's Fly Like an Eagle (which was weird but not nearly as weird as her cover of Madonna's Like a Prayer later in the evening). This gave the audience no chance to show their appreciation, which they kind of desperately wanted to do.

Other highlights were Forca, with Furtado on ukulele, and an emotional Try, which had the audience singing along, some even tearing up, feeling the pain of their youth once again. Big Hoops (Bigger the Better) had the place pumping, and sounded far better live than on her new, not-very-well-reviewed album. Ditto for High Life – even though she had a false start and had to begin again. "I forgot the lyrics," she told the audience, in a rare human moment (most of her banter consisted of lines like "Hey Vancouver!"). The screw-up was one of the best moments of the night.

The concert ended abruptly with Maneater, after which Furtado offered a quick goodbye and exited stage right.

Furtado can be better than this. So can this show, which has the potential to improve as it moves across the country. But how many people will be there to see it? 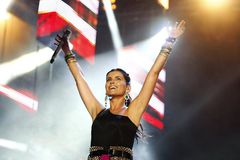 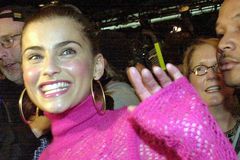 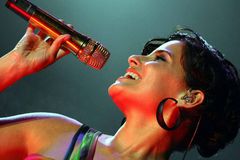