The Radiohead Jazz Project may seem like an oxymoron – what does a cerebral, unswinging alternative rock band have to do with jazz? – but it's actually a reflection of the fact that Radiohead's music is terrifically popular among younger jazz musicians. A concert at the Rex in Toronto this weekend plans to showcase both sides of Radiohead's jazz appeal.

Jazz interpretations of Radiohead songs have been around since the late nineties, when Brad Mehldau began playing Exit Music (For a Film) with his trio. Mehldau has recorded three versions of the tune, and a host of other jazz acts – Jamie Cullum, Chris Potter, Robert Glasper, the Bad Plus – have added Radiohead songs to their repertoire.

What's the allure? "I think it's because the music it's a little more introspective, a little more intense," says Josh Grossman, the Toronto Jazz Orchestra's artistic director, and the organizer of the Rex show. "There's a lot of thought that goes into it."

Guitarist Don Scott, of the jazz quartet Peripheral Vision, agrees: "Radiohead appeals to jazz musicians in a big, bad way because the music is more complex than your average rock band." Where a lot of pop writing is fairly simplistic, he says, Radiohead's music has "more interesting or complex harmony or forms. The phrasing is bizarre.

"And they also have a sort of brooding darkness to their music that appeals to a lot of jazz musicians."

A couple of years ago at the musicians' New Year's party he regularly throws, Scott found himself in a conversation with drummer Ernesto Cervini about how much the two of them loved Radiohead. "I said, 'Hey, why don't we get some of our friends together and just jam on a few of those tunes?'" recalls Scott. After several others at the party expressed interest, Scott says, "We got together and did a little session, and it was really, really fun."

So much fun, in fact, that the jam session became a band, dubbed Idioteque after a song from Radiohead's album Kid A. "We played a gig at the Tranzac [in Toronto]in May of 2010, and it was really awesome," says Scott. "Zillions of people were there, there was cheering and encores – all the things you'd expect at a rock concert."

Even though all six members are better known as jazz musicians, Idioteque doesn't play around with Radiohead's music, offering note-for-note recreations of the songs as recorded. "I make a point that we play tunes from all eight studio albums, so we are doing the whole Radiohead history," says Scott.

Grossman says he began playing Radiohead as jazz through the Chris Hunt Tentet, in which he plays trumpet. "It really interested me to take music from an alternative rock band and put it in a jazz setting," he says. So when he got wind of the Radiohead Jazz Project, for which the Lawrence University Conservatory of Music commissioned a set of big-band arrangements of Radiohead tunes, he was intrigued.

"Some of them are kind of direct representations of the tunes, and some are more interpretive," he says. "But they're really nicely done." Even better, they're fun to play, which is why Grossman decided to make Radiohead the basis for a Toronto Jazz Orchestra show. "The musicians seem to be really into it, which is great."

In addition to the Lawrence charts, Grossman had Hunt expand his tentet arrangement of Motion Picture Soundtrack, and commissioned TJO trombonist Christian Overton to arrange Paranoid Android. "There are some really interesting harmonies and stuff beyond the melodies of the tunes," he says. "So the band has lots of interesting stuff to play."

The Radiohead Jazz Project will be at the Rex in Toronto on Sunday, Dec. 11. The Toronto Jazz Orchestra plays at 7:30 p.m., with Don Scott's Idioteque at 10:30 p.m. 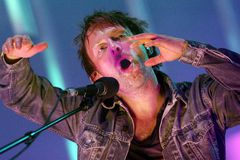