The media have been unusually careful about reporting Joni Mitchell's condition since she fell ill a couple of weeks ago. This is because people love her songs, and because they love her as a symbol of emotional sensitivity, of a certain idealistic age, of women's rights (since she succeeded in a male, rock 'n' roll-dominated era of popular music) and perhaps of their own childhoods.

So we are being extremely delicate in our reporting. No news items have revealed what exactly caused her sudden hospitalization, but all have mentioned that she "suffers from Morgellons disease." This is because Mitchell herself described the affliction and used its name in an interview in 2010. News stories may then carefully allude to the fact that this "disease" is "mysterious" or even "controversial." But the damage is done: The phrase "suffers from Morgellons" is quite simply inaccurate, and even harmful, in that it perpetuates a delusion.

Those who claim to be suffering from it are more likely suffering a psychiatric illness, experts say. If that's the case with Mitchell, we should really be saying she "revealed in 2010 that she suffers from delusional parasitosis." The name Morgellons was invented by a person who is not a doctor and is not employed by any hospital, university or research institution. It was intensely studied by the Centers for Disease Control and Prevention in the United States, and the CDC's conclusions, released in 2012, were straightforward: Researchers found no common cause of the disease, and say those who believe they have it have often self-diagnosed after encountering websites that describe it. In other words, it is a delusion that is spread by the Internet.

The fact that newspapers are being so tactful about the possibility of psychiatric disturbance in Mitchell's case is incongruent with the supposedly new attitudes about mental illness that are being trumpeted in those same newspapers. Aren't we constantly reading about how we should "end the stigma" when it comes to mental illness? Aren't we being told that there is no shame in psychiatric disorders, that their sufferers should not be morally judged, that they should be open about their ailments? Wasn't that the goal of Bell's massively hyped "Let's Talk" campaign? If there is no shame in being depressed, why should we be afraid of the shame involved in suffering from delusions?

Furthermore, recent years have seen a spate of studies, articles and books claiming a connection between mental illness and artistry or creativity. These have been eagerly received by anyone who has ever felt down in the dumps or nervous in an elevator; they have served to romanticize neurosis. It turns out there is a slightly higher incidence of certain mood disorders, such as depression and bipolar disorder, among professional artists. Simultaneously, a popular idea identifies Asperger's syndrome as an infallible indicator of genius.

Cue the endless lists of "10 eccentric artists" and "20 great writers who were drunks." Michelangelo never washed, so your occasional weeping jags and your fear of job interviews may mean you are actually a misunderstood artistic genius. Being an "introvert" suddenly became sexy; 100 Internet quizzes bloomed, designed to show you that you were introverted. In fact, anyone who isn't actually sociopathic will obtain a high score on these tests. They are designed to reassure you that you are actually sensitive and may yet create your artistic masterwork.

This popular connection between sadness and creativity plays into a long-cherished myth of the artist as tortured, and it comforts everyone who has ever written poems by saying they are actually hypersensitive, that they are special.

So why didn't all these studies about the unusual and desirable craziness of artists get trotted out in the Joni Mitchell case? Because her belief in Morgellons is not sexy. Anxiety is romantic, depression is romantic. Delusional parasitosis is just sad and worrying.

There is another reason for our reluctance to cast the singer in a bad light, and it is a particularly contemporary one. There has been a lot of worrying lately – particularly after the child-abuse accusations made against Woody Allen – about what artists' personalities mean to our moral relationship with their art. I thought this question had been resolved centuries ago: Lots of artists did terrible things and held unacceptable views, and we studied their work in university. No problem.

But a new radicalism seems to have taken hold of the young on this issue. There is now a sense that to digest a piece of art made by a bad person is to digest his badness, to become contaminated by it. So we should avoid the art of bad people. (Admittedly, the proponents of the theory are rather selective in the artists they choose to blacklist for moral crimes: I have not once ever heard anyone suggest a ban on the music of Michael Jackson, for example.)

If you start requiring your favourite artists to be good people, then you start running into moral quandaries of your own. You find out too late, for example, that they did something bad in their youth, or that they just announced that they didn't believe in feminism (as Joni Mitchell did in 2013). Then you must affect all kinds of intellectual contortions to justify that artist's flaws, rather than just shrugging your shoulders and saying, "What an idiot. Nice rhyme scheme, though."

Life would be easier for Mitchell fans if they didn't have to tiptoe around her condition. She may be a little unbalanced, or even highly neurotic – we don't know for sure. But either way, we can still love her songs. And if she's suffering from delusional parasitosis, it would in fact be more compassionate to describe her as a victim of mental illness than to preserve a fictitious persona. After all, her songs will live for much longer than she does. 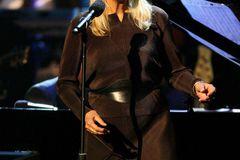 Joni Mitchell to be inducted to Songwriters Hall of Fame
November 9, 2006
Follow us on Twitter @globearts Opens in a new window
Report an error Editorial code of conduct
Due to technical reasons, we have temporarily removed commenting from our articles. We hope to have this fixed soon. Thank you for your patience. If you are looking to give feedback on our new site, please send it along to feedback@globeandmail.com. If you want to write a letter to the editor, please forward to letters@globeandmail.com.
Comments