This is the stereotype of the deadly serious overamped metal band that was so deftly parodied in This Is Spinal Tap, and one of the many inspirations for the "It goes up to eleven" joke. Deep Purple was listed at that time in the Guinness Book Of World Records as the loudest band in the world, having attained 117 decibels in concert and knocked out three members of the audience.

But Made in Japan is seriously an amazing and transporting set of musical improvisations and noise, an unsettling voyage through a number of musical genres including jazz, blues, classical, spacey electronica and sheer crazy drugged-out angry power feedback. There is an eight-minute drum solo. It's a long trip. It has the edge-of-coherence feeling you get from heady poetry, the sense that it might all collapse into random sound. I listened to it when I was 10 years old and it changed my world, set my musical tastes forever – I was from that moment on fascinated by the deep darkness and sexual energy of noise, and by the hysteria of fast percussion. I couldn't listen to soft or pleasant pop music from that moment on, and still seek out a hard edge.

And at the centre of that aesthetic, at the centre of the band and the revolution in musical sound they were a part of, was the classical composer and organist Jon Lord, who co-founded Deep Purple and died last weekend at the age of 71. In films of Deep Purple, he's the super shaggy guy hiding behind the organ and a mustache the size of a dog.

If you're wondering why so much ink has been spilled in the past week on this non-front-man of a band that hasn't been in the press for 40 years, take a look at some videos of performances of Deep Purple from 1970 to 1974. This is their heaviest incarnation, usually called Mark II, and the period of their greatest commercial success. Those performances look quite foreign and even mildly scary now: the tight clothes and masses of hair look uncomfortable, the noise is gritty, the pace blistering, the singer sweaty and pale and screechy. They all seem demonically driven and not entirely happy. And the clubs are filled with pale and serious kids, sucking in this violence like a new drug. It's a drug we have in our water now.

That wailing, ear-sanding sound was made up of fuzzy guitar and an electric organ carefully prepared by Jon Lord. (The singing in Deep Purple was always the least interesting part, the words trite and perfunctory. The attraction was sheer musical texture.) In interviews Lord has described how he experimented with pairings of organs and amplifiers to get just the right amount of distortion – to make his organ sound "throaty", to match the "vicious" sound of Richie Blackmore's guitar. He settled on putting the Hammond directly through a Marshall guitar amp, resulting in a machine the band members called the Beast. It's funny – he was at the time ignoring synthesizers, which were just on the market. But what he ended up creating was a classic synth sound, that grainy buzz later perfected by the cheap Roland TR-303, and he used the sliders on his organ to create all kinds of siren-like effects. All these came to infiltrate mainstream pop music only in the 1980s.

Why was this so interesting? Jon Lord was a guy trained in classical piano and capable of scoring an entire symphony, who nevertheless chose to pursue the ragged edge of art, the chaotic and the primal. This serious, sombre man – he often seems faintly disapproving in interviews – channelled the Dionysian. Popular music has little space for people like this today, just as it has little time for a four-minute organ solo with a clever little reference to Ralph Vaughan Williams.

Try putting Made In Japan on headphones as you work. You can't. It will make you very uncomfortable very fast. It's too intense and unpredictable for anything. You were meant, in that long-ago time, to listen to it.

In memory of Jon Lord, play Space Truckin' at your next party – and see frenzied dancing arise.

Editor's note: An earlier version of this story incorrectly spelled Jon Lord. This version has been corrected. 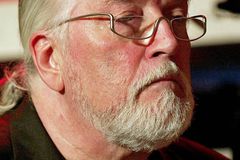