'Bonnie and Clyde were trying to tear everything apart, but, for us, we're trying to bring everyone together."

July Talk's Peter Dreimanis is commenting on the comparison made of himself and his co-vocalist Leah Fay, and the infamous pair of Depression-era bank robbers who stole with swagger and a poetic manner.

He and Fay are speaking on the rooftop patio of a recording studio where they're about to record a follow-up album to their Juno-nominated 2012 self-titled debut. They are a dashing pair: he, a gruff-voiced romantic with pale blue eyes and a shock of brown hair; she, a thoughtful, sweet-voiced beauty in a Jenny Lewis T-shirt.

On stage, the nature of the Toronto five-piece is raw, with copper wiring for nerves and a flair for dynamics.

Stylistically, July Talk flips from punk blues to angular indie rock and pop. The genre promiscuity has been a source of frustration to some.

It was at a small bar in Toronto's west end, on a summer night in which most of the area establishments were celebrating the anniversary of the city's great blackout by going unplugged and candle-lit.

Fay, a performance artist who paid the rent by slinging lattes, was singing and playing an acoustic guitar with a friend when Dreimanis sat down in front of them and began clanking beer bottles to the beat. It was a crude (if endearing) form of musical courtship, which ended with the bottles smashed to the floor. "I brushed him off at that moment," Fay recalls.

But soon after, they bumped into each other at the Dakota Tavern, and Fay was intrigued by Dreimanis's naturalness.

"He spoke with this crazy sincerity that I couldn't ignore," she explains. "It was a quality that I find rare in Toronto, especially from someone in their early 20s."

What did Dreimanis, a music-video filmmaker and a former member of indie-rockers Mohawk Lodge, say to her? "I told her that her voice was in my head and that I wanted her to listen to some music I had made."

The two (who are not a couple, other than musically) began collaborating, eventually coming to the decision that July Talk needed to be a five-piece rock band, not a pair of yin-yang duetists. Guitarist Ian Docherty, bassist Josh Warburton and drummer Danny Miles fit the bill.

July Talk recorded its debut album in 2012, before they had done any touring.

The approach involves a bluesy take on the rock intensity of the Constantines and the pop savvy of Metric.

The aesthetic is conversational – a dialogue between the band and listener, and between the the Waitsian gravel of Dreimanis and the prettier tone of Fay. For example, on the garage blues of the song Garden: "True love has its benefits and I play to reap them; You've got hips and I've got lips, and I plan to keep them."

The band's reputation grew as they toured the club circuit relentlessly. This summer, July Talk is booked for some two dozen festivals, playing not only to larger audiences but also to fans who aren't necessarily aware of the band. "It's a totally different beast," says Dreimanis, comparing the small halls with the big-field affairs. "It's Sunday at 3 p.m., and you see these expressionless faces staring back at you. It's hard to feel confident when you're looking at that."

But at last weekend's Toronto Urban Roots Festival, something clicked for him as he watched Cal-rock heroine Jenny Lewis perform. "She sang a lyric, and it struck me at my centre. My whole body was shaking inside, and as I looked around I realized I was standing there with that same dumbstruck look on my face." It was an epiphany for Dreimanis, who realized that what is going on in an audience's collective head is more important than anything its members are doing physically. "It's a scary thing looking out at 20,000 people looking at you blankly, but you have to be okay with it."

For its second album, July Talk's challenge is to learn how to capture the intimate spontaneity it practises in concert and get it down on tape.

"When we're on stage, I feel like we're exactly who we are – true and honest," Dreimanis says. "In the recording studio, we haven't gotten there yet." Fay agrees.

"It's about capturing chaos," she says, citing a moment at the Toronto festival when she jumped on Dreimanis and knocked his Telecaster out of tune.

As there are no easy answers, the conversation continues for July Talk. Bonnie and Clyde never wished to be taken alive, but Dreimanis and Fay absolutely do.

"We're trying to be potent versions of ourselves, wherever we are in that moment," Fay says.

"It will be desirable to some, and really revolting to others."

Dayglo and ‘dancing’: How Lady Gaga’s ArtRave tour went down in Toronto
July 10, 2014 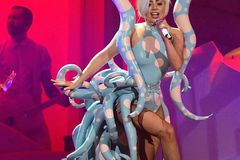 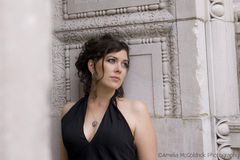 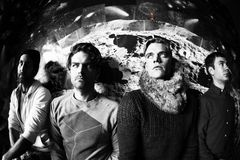 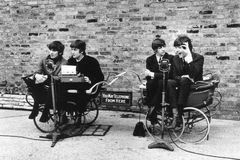