It is called BLack on BLonde, the very title suggesting the duality we've come to expect from the man named k-os.

On his new "double-album extravaganza," as he calls it, the Juno-winning hip-hop star addresses his chaos. The 20-track opus is audaciously conceived: The first 10 songs are hip hop; the second 10, rock 'n' roll. The side with the back beats begins with a jagged, Kravitzian track about dividing up post-breakup possessions, The Dog Is Mine.

There's a school of pop-psychology that casts k-os as musically and culturally confused. Not everyone knows what to make of the hip-hopper who creates crustacean-inspired, all-ages music on one hand, and who is welcome inside the indie-rock scenester's tent on the other. "No time to get down, cause I'm moving up," goes the chorus of Crabbuckit, the boppy 2004 single from k-os, addressing those who believed he should keep to some true-school b-boy place.

"I grew up in Whitby, Ont.," says the man with the name Kevin Brereton on his driver's licence. "I drove a Volvo through high school. I went to York University. I could be doing anything, but I chose music."

Speaking recently at the Soho House in Toronto, the son of Trinidadian Jehovah's Witness parents confronted the perception that he is a man of confused halves. "You know, Canada is progressive, but they really haven't embraced black intelligence yet," he says, unruffled. "So, when they say conflicted, what they really mean is that he's intelligent, and that he's self-aware."

Few doubt his intelligence. Some, however, doubt his focus. Record labels want easily marketable products, but k-os defies conventional marketing plans. He's been told by U.S. label executives to give them records that are, for lack of a better word, blacker. They also want cameos from hottest-stuff rappers. So what does k-os do? On Like a Comet (We Rollin'), the lead track from BLack on BLonde – it's a split homage to his heroes Bob Dylan (Blonde on Blonde) and Mos Def (Black on Both Sides) – the hook is sung by Corey Hart, the brooding eighties pop star who wore sunglasses at night.

"Corey Hart was taking girls away from everybody of my generation," k-os declares, his spiky, giant gold wrist band the room's lone bit of bling. "At school, the girls would open their lockers, and from top to bottom it would be full of Corey Hart pictures."

What k-os himself spouts on the track is a bold first-person declaration, which is something rarely done by rap artists. He believes himself to be a "thriller," which rhymes with "I'm a top-biller." Which, arguably, he is, given that the other featured artists on the release are indie-rock chick Emily Haines, Bedouin Soundclash's Jay Malinowski, rappers Saukrates and Shad, and Montreal rocker Sam Roberts, who k-os sees as his mentor and muse: "He's kind of the Neil Young of his generation."

No disrespect to the Brother Down singer, but it would be nearer the truth to say that the Neil Young of Sam Roberts's generation is Neil Young. Indeed, k-os has nothing but grand things to say about Young as well. "Neil Young is funky," says k-os, who looped elements of Young's Cowgirl in the Sand on the new album's Play This Game. "If you're a hip-hopper in Canada or if you're a black person in Canada, you need to accept Neil Young as a saviour."

Like Young, k-os is known to be a prickly uncompromiser when it comes to his musical vision. Young is notoriously reluctant to allow the use of his material, and getting his permission to sample Cowgirl was such a long shot that k-os was urged by those close to him to not even bother trying. But he wouldn't budge. And although the process caused the album's release to be delayed by months, eventually the sample was cleared and k-os got what he wanted.

"I didn't care," he says, about the hassle involved. "I just wanted to go with the creative vibe."

K-os's Vancouver-based manager is blunt about his client's mulishness. "If you bring up anything that has to do with creativity, he just ignores you," says Terry McBride, CEO of Nettwerk Music Group. "It might drive me nuts, but I respect that about him."

That k-os would envision a two-headed package of rock and rap is no surprise. He has straddled the two genres before, notably on 2006's Atlantis; Hymns for Disco, where he infused his hip hop, reggae and soulful pop with elements of blues and punk. BLack on BLonde is simply the formalization of his big self-confidence. Not a shy man, he recently tweeted that "all the Canadian rappers that sing and rap now should gimme about 20 per cent of they royalties." K-os blows his own trombone, and then boasts that he's the first hip-hop hornist.

The thing about k-os's embrace of guitar rock, however, is that it could be seen as cagey half-step. The artist who refers to himself as the "little brother of Prince and Lenny Kravitz" is hedging his bet, only comfortable in issuing a blonde album when he can take off his wig to show his black roots.

Asked about that, k-os, wearing a ball cap on his head instead of his former dreadlocks, dismisses not only that suggestion, but his whole conceptual split-minded vision of a double album. "In four months from now, people might not even know the record exists," he says with a shrug.

And he's probably right. The album format is no longer the grand statement. Rather it's a safari animal to be picked apart by iTune jackals who leave meat on the bone for others. Pop fans will download the thoughtful single Nyce 2 KnowYa, hip-hop audiences will have their choices, and rock fans might cotton to The Dog Is Mine.

K-os has his detractors and doubters, and he may never get the full recognition he believes he deserves. That's fine. He doesn't really need his due. But give the man his damn dog – he's earned it.

K-os's BLack on BLonde is a double-dipping adventure in hip hop and rock. Critical reaction to the album has been generally positive, but the mixing of the two genres by other artists has yielded some hairy moments in music history.

Insane Clown Posse On 1992's Carnival of Carnage, the Detroit jokesters mixed sexism and racism with grease paint. You do the math.

Aerosmith and Run-D.M.C. The turntable-scratching version of their old hit Walk This Way in 1986 was genius, but Steven Tyler's creepy screeching on the chorus had many listeners running, not walking, away. 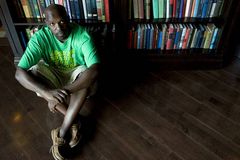 Winning the Polaris ‘like getting the Valentine from the right boy’: Feist
September 25, 2012 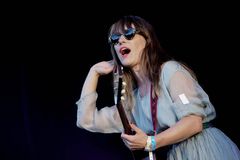