There were no fireworks, no Canadian flags or beer and certainly no maple syrup or butter tarts. But the performance at the Odeon of Herodes Atticus, the ancient outdoor theatre on the southwest slope of the Acropolis, could not have been a better advertisement for the richness of Canadian culture.

"Happy Canada Day," Diana Krall told more than 4,000 enthusiastic fans – a full house – on the hot July 1 evening as she began her concert. The setting was magical: the remnants of ancient walls and arches forming a backdrop to the stage, with gently changing lighting turning the stones red, then blue and ochre. The near vertical seating ensured that no one had a bad view, and gave the concert something close to the intimacy of a nightclub.

It was Krall's first performance at the Odeon since her twin boys were born six years ago (their father is Elvis Costello) and she fulfilled her patriotic duty with a gentle sprinkling of Canadian content – songs by Joni Mitchell, a rousing rendition of Ophelia, by that honourary-Canadian band, The Band, and Departure Bay, a song composed by Krall and Costello that commemorates Krall's Nanaimo, B.C., home.

The rest of her well-rounded performance featured numbers from her new new Glad Rag Doll album, along with classics from Nat King Col and Fats Waller, with Tom Wait's Temptation thrown into the mix. The captivated audience included several cabinet ministers in the government of prime minister Antonis Samaras, and modern Greece's most famous export, singer Nana Mouskouri. One of the best-selling female recording artists of all time, she is said to have sold 350-million records in her long and prolific career. Though the number has never been verified, there is no doubt she is one of the most adored and successful European artists since the Second World War.

Krall told the audience that she was honoured that Mouskouri had watched her performance. It was evidently an emotional evening for the elder singer. She is 79 and gave her farewell performance in the same theatre in 2008.

The Canadian evening did not happen by accident. It was orchestrated by Robert Peck, Canada's ambassador to Greece, who invited both Krall and Mouskouri, who lives in Geneva, to Athens and worked on every detail, right down to arranging the flights for Krall and her band. Peck understands well that a middle power like Canada is best promoted through the arts, and that cultural diplomacy, done well, can leave an audience with a lingering feel-good attitude towards Canada.

Mouskouri too was a superb ambassador for Canada that evening, telling almost everyone she met how much she adores the country. In May, she collected an honourary degree from McGill University and her two children live in Quebec. She made her Canadian singing debut at the Place des Arts in Montreal in 1965 and goes there often.

Krall and Mouskouri, who had never met before, couldn't stop talking at the post-concert reception at a restaurant with magnificent views of the floodlit Parthenon. At one point, Mouskouri removed a chunky ring and gave it to Krall as a gift of friendship. Peck said the gesture was "spontaneous," a symbol of their instant bonding.

Judging from Mouskouri's smile during the performance, she has become a Krall fan. But she may also have been smiling because she can't wait to get back on stage herself. In October, this remarkably well preserved and energetic singer will launch a year-long global tour will take her to ten Canadian cities. Mouskouri does not take to retirement well. 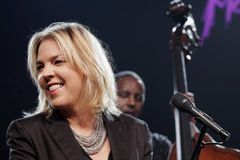 Tony Bennett and Diana Krall: Old friends together again
April 29, 2018
Follow Eric Reguly on Twitter @ereguly
Report an error Editorial code of conduct
Due to technical reasons, we have temporarily removed commenting from our articles. We hope to have this fixed soon. Thank you for your patience. If you are looking to give feedback on our new site, please send it along to feedback@globeandmail.com. If you want to write a letter to the editor, please forward to letters@globeandmail.com.
Comments