Lana Del Rey's breakthrough record, 2012's Born to Die, struck me as good, but not very interesting. The production was as textureless as an ice block, obscuring whatever flaws and catches made the artist herself. Del Rey's references are obvious: diners, motels, the open road; blue jeans and white T-shirts, tattoos; a hazy film-noir vibe. She appears in her videos as Marilyn Monroe and Jackie O, as a biker moll in short shorts, as sultry, sullen, dead. The idea is the "dark side of the American dream," to quote a lyric, but it came off more like a car commercial.

Her persona – the pretty, coreless woman, blowing in the wind – felt too much like a throwback. Groped by masculine hands, singing love songs to powerful men with the sluggish, murmuring glamour associated with tragic women. "Cuz I'm your jazz singer/And you're my cult leader/I love you forever," she sings on the title track of Ultraviolence, her latest full-length, released this week. In the chorus: "I can hear sirens, sirens/He hit me and it felt like a kiss." ("I like a little hard-core love," she said in a recent Fader cover story.)

What I realize now – what Ultraviolence, which is a great album, more vivid, nuanced and ripe than Born to Die, proves – is that Del Rey's references are less important than her relationship to them. In interviews, she comes across as thoughtful and lucid, but cagey; the details of her life have been studied at length, but they don't quite coalesce into a fixed persona. Instead, she projects qualities – tiredness comes to mind – and makes a theme and a costume out of old icons of feminine frailty. She plays the tragic, surrendering beauty who knows her own fate, or, put another way, the tragic beauty who surrenders because she's tired of being herself. Marilyn Monroe with foresight, or a martyr for bad men.

"For me, the issue of feminism is just not an interesting concept," she said in that Fader interview. "… My idea of a true feminist is a woman who feels free enough to do whatever she wants." Del Rey has taken a lot of flak, from people like me and from men with opinions, for seeming to glorify female submission. But vulnerability is one of her most fascinating attributes. She's not out to reclaim or subvert sexist clichés, but to perform powerlessness, which is both unsettling and exciting. Powerlessness is a fantasy, once you have power.

It's difficult to confront the notion of feminine weakness, at least without heavy irony (e.g., Mad Men). The urge, my urge, is to repudiate the old stereotypes as well as those who represent them. But it's important to consider the roles that women have had to make do with. Important, as well, to respect the ways women did make do. A week before Ultraviolence was released, ECW Press published an English translation of Norwegian journalist Kari Hesthamar's So Long, Marianne, a biography of Marianne Ihlen, the woman Leonard Cohen lived with on the Greek island of Hydra. It's the story of a remarkable woman who was a muse – who has, until now, appeared in history as a man's idea – and how she found herself. Often, the book reads as a caution against giving up your power.

Marianne puts up with Leonard's affairs knowing it's the only way to keep him (Cohen does come off relatively well, on the whole), which is frustrating in the same way it's frustrating to hear Del Rey sing of her undying devotion to Some Guy. Through her relationships, Ihlen struggles to find her own thing: Hydra is full of artists, and "though no one expected her to take up writing or painting," Hesthamar writes, "she couldn't help feeling inferior because she didn't stand on her own feet creatively or economically." Their domestic life is idyllic – Marianne keeps a fresh gardenia on Leonard's desk; Leonard writes her love poems – but vaguely sinister. On a trip to Paris, "Marianne closed her eyes and leaned her head against Leonard's shoulder, held his arm and let him lead her as if she were blind. … Finding her course and surrendering herself."

The fantasy of surrender – to a domestic arrangement, a lover, even to death – is universal and not gender-specific. (Recent example: Venus in Fur, the David Ives play and now Roman Polanski film, in which an actress toys with a masochistic male director.) Everyone longs, sometimes, to give up. But surrender is an especially uncomfortable, and therefore a rich, subject for women. The video for the 2012 song Ride, which sees Del Rey gamboling with grimy, middle-aged bikers (and thoughtlessly donning a native-American headdress, which, unlike the feminine clichés, is not hers to play with), begins with a monologue in which her character describes herself as a former singer – "not a very popular one" – who has abandoned herself to strangers and to fate. "I was in the winter of my life," she says, "and the men I met along the road were my only summer." This is not idealism, but camp.

Del Rey's "submission," as that Fader story points out, is really self-designed. She writes, or co-writes, her own music, as well as the treatments for her videos, casting herself in states of dependency to men who are almost always domineering but almost never fully drawn. They're just figments of masculinity. (In the credits to Ride, Del Rey's character is named as "Artist"; the others are either "Lovers" or "Bikers.") Video Games, which blew up on YouTube in 2011, sounds like a lament to a cold, distracted boyfriend, but she has described it as an earnest love song for both a man and an idea thereof: "It was just a time in my life when I had let go of my own personal career ambitions, and just enjoyed being with him, at home, when he'd come home from work and play video games," she said in an interview with NME. "And I would write while I watched him." He was her muse, in other words. 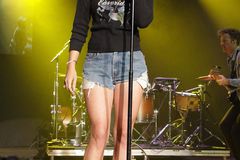 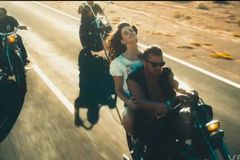 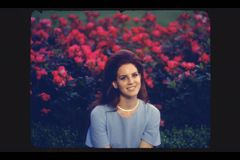