On Monday, an empty tour bus pulled up to Air Canada Centre and Lana Del Rey got out.

Del Rey, an American pop-music product who puts out an enigmatic air for public consumption, is a curious feat of manufacturing. Born Elizabeth Woolridge Grant, the sad-song specialist has released five albums of lush noir balladry fixated on bad romances and old-Hollywood Americana. Her followers adore her; this queen of sombre is a cult figure blown big.

There's an unrealness to the glamorous Del Rey – a minor-key vision, a hologram come to life. At an Air Canada Centre filled with young female fans, she sang with cool un-emotion and walked the stage deliberately, her semi-vacant gaze seemingly fixed on some Super 8 film camera of her own imagination that no doubt was recording her in a grainy, flickering slow motion from an age gone by. Her unexceptional voice occasionally fluttered to a higher register, but otherwise her resting heart rate was never threatened.

Tempos were uniformly down; her auto-piloted four-piece band hustled not even a little. A pair of dancers occasionally acted as if they were backup singers, but mostly they didn't even bother with the fake.

For one song, Yayo, Del Rey was handed a Gibson Flying V guitar. She played it carefully, taking to it as unnaturally as a bachelor would handle a baby. Early on, she sang one number while on her back, doing so because – well, just because.

Dressed in thigh-high boots and a leather skirt, with her long brown hair held by a pair of barrettes, Del Rey looked as if she just stepped off the set of Valley of the Dolls. On the title track to her latest album, Lust For Life, she sang that "only the good die young." A video-clip tribute to Marilyn Monroe happened, and, on Blue Jeans, from her 2012 album Born to Die, the actor James Dean was mentioned.

Melancholia is in vogue these days (though Del Rey, who co-writes all her own material, was ahead of the curve in that regard). In 2017, the rapper-producer Logic (with help from Khalid and Canadian singer-songwriter Alessia Cara) had a hit with 1-800-273-8255, a song which takes its title from a suicide-prevention hotline. Julia Michaels's Issues, about anxiety, is in the running for song of the year at the Grammys later this month.

But just as sad is becoming the new black, Del Rey is less fatalistic and more optimistic on her new album than she has been previously. At Air Canada Centre, on When the World Was at War We Kept Dancing, she posed legitimate, timely questions: "Is this the end of an era? Is this the end of America?"

The answer, to Del Rey's mind, is no. The song references the Second World War, with mentions of pearls, corsets and old-fashioned "cut a rug" lingo. And yet when she sings about a happy ending, it reads more like a forecast than anything from the past.

So, a new Del Rey, maybe. On Lust for Life, her producers added modern beats and hip-hop accessories to her aesthetic. Now well into a flourishing career, her "live fast and die young" notions are getting old. Despite her fetishism for melodrama, it looks like her promise will not be tragically cut short after all.

At the end of her concert, Del Rey gathered her flower bouquets and walked off the stage, waving goodbye in beauty-queen fashion. A victory of artifice and an actress as much as a musician, she'll be back, always ready for her close-up. 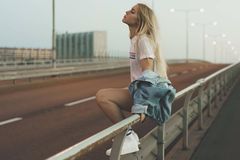 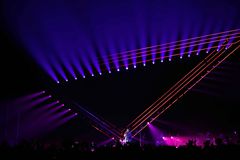