Canadian R&B mysterioso the Weeknd has lifted the shroud from his "Starboy" album.

After he tinkered around with Daft Punk this summer and shed his trademark dreadlocks a couple of months ago, the Toronto performer's third studio album dropped early Friday morning.

The 18-track release comes amid the sort of hype reserved for only the biggest international stars.

The Weeknd, born Abel Tesfaye, has been teasing listeners for months with two music videos, a 12-minute short film called "Mania" and a trickle of songs to whet fans' appetites.

Related: Why The Weeknd is truly Toronto's very own

But he brought it all to a crescendo Thursday night with a fans-only listening party at Toronto's Pinewood Studio, a space usually reserved for sprawling movie productions, and a rare interview with Apple Music DJ Zane Lowe.

With "Starboy" now available to buy and stream on music services, here are a five things to know about the project:

IT'S STAR(BOY) POWERED: Not like the Weeknd needed marquee performers to give his latest album traction, but there's plenty of them here anyway. Robotic duo Daft Punk lend their hands to the opening and closing tracks (lead single "Starboy" and the funky "I Feel It Coming"), while Lana Del Ray drifts through the fleeting "Stargirl Interlude." Others making appearances include rapper Future ("All I Know") and Kendrick Lamar ("Sidewalks") performing alongside Michigan singer Daniel Wilson, whose smooth voice had listeners initially thinking he was U.K. crooner Sam Smith.

HE MAY BE SHADING DRAKE: Rumours of a rift between the Weeknd and old friend Drake have circulated for years without much solid evidence. The two knew each other back when Tesfaye was still trying to get his career off the ground in Toronto, but after numerous collaborations on Drake's albums the two appeared to go their separate ways. That's left fans wondering if this line in "Sidewalks" is a direct shot at the "Hotline Bling" performer: "Too many people think they made me. Well if they really made me then replace me." Then again, that could also describe a lot of record executives.

RETRO SOUNDS ARE IN: While he doesn't pick a particular decade, a couple songs are fused with the spirit of Throwback Thursday. The funky "Secrets" borrows from the chorus of the Romantics' 1984 rock hit "Talking in Your Sleep" and fuses it with a sample of "Pale Shelter" a 1982 track from Tears for Fears. The bootyshaker "Rockin"' carries a bouncy beat that would fit perfectly in an early 1990s house mix.

HE'S STILL SOMBRE: Yes, several tracks are certain to ignite dance floors, but Tesfaye hasn't lost his touch for the debauchery and depressing lyrics that shaped his early career. In one of his darkest songs yet, "Ordinary Life" has the singer (or the Starboy character?) coming to terms with fortune and fame – and how the lifestyle might destroy him. Telling the story of a suicidal sexual encounter behind the wheel of his car, he references the death of David Carradine before reaching even further back. He sings: "Like I'm James Dean, I'mma die when I'm young."

THIS ISN'T THE END: Beyond a global tour set to kick off in the new year, the Weeknd promises more from his Starboy alter ego. In the interview with Lowe on Apple Music, which aired Thursday night, he said a "Starboy" comic book is in works and he'd like to pitch it to Marvel or DC Comics.

Editor's note: A previous version of this Canadian Press story incorrectly credited Sam Smith on "Sidewalks." It is in fact Daniel Wilson. This version has been updated. 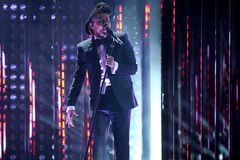 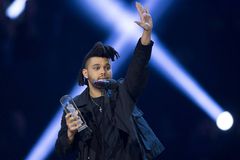