Toronto's Luminato Festival has staked a great deal on the highly original and highly idiosyncratic imaginative outpourings of a now 82-yr.-old Canadian musical wizard, R. Murray Schafer. Three long years in the making, the production of Schafer's music ritual Apocalypsis that opened at the Festival Friday night brought together 1,000 musicians, singers, actors, dancers and technicians. It assembled a cast of internationally-known stars. It cost over a million dollars. It was a high-profile, big-time gamble.

The gamble paid off.

Although not perfect, Luminato's Apocalypsis was never uninteresting, and often stunning, stretching out over its uninterrupted two hours a pageant of dance and song and chant, destruction and peace that almost, I think, fulfilled Schafer's goal for the work, for all art, actually, "to hurl (us)... beyond our limits into the cosmos of magnificent forces ... to have our eyes and ears and senses tripped open ... to the sensational and the miraculous."

A heady and risky goal for any enterprise of down to earth human beings (especially 1,000 of them), but it's tribute to Schafer's uncommonly bold and daring vision and the skill of director and designer Lemi Ponifasio that we get close to that miraculous often in this production. Yes, there are problems when the stage seems filled with just too many bodies, stretches of time when Schafer's musical tapestry stretches too thin, events on stage that are confusing, but it is just those demands of the intellect that Schafer wishes to bowl over in his in his trance-like, mystical work.

Apocalypsis is in two parts, the first based on the Book of Revelations, about the end times, which features the voice of John of Patmos, who is its putative writer, a dancer in a glass cage centre-stage representing the body of John, visitations from the Archangel Michael, the Whore of Babylon, the Anti-Christ (played by Brent Carver making an odd little speech about computers), and several other unnamed figures. It is active and loud, full of sound and fury, signifying the destruction of the world. It is followed by Credo, a forty-five minute coda of infinite peace and slow-moving choral lines, representing the new world, performed by 12 choirs arrayed in the Sony Centre balcony, in its quiet unfolding sounding like a movement of a Mahler symphony taken to the next level of intensity.

Faced with this banquet of musical ideas, internationally-famed director Ponifasio has created a striking counterpoint of stage effects and design. Working in his trademark black and white (no colour of any kind on stage), Ponifasio creates a combination of group choreography, individual movement, and visual interest that doubles down on certain aspects of Schafer's score at times and plays against it at others. For the Credo section, which has no explicit scored stage direction, Ponifasio has created a telling, but simple tableaux where a series of dancers advance on stage, slowly discard their black robes, and ascend, naked, into a series of bright white lights on stage, a new race shedding old habits. Then, a single dancer, chalked in white, descends those same stairs, a new Adam, hesitates, then walks through a pool of cleansing water, while Schafer's choirs sing their apotheosis in the balcony. I found it very effective.

As conductor of this extravaganza, David Fallis, more often seen before the 20-odd members of the Tafelmusik Orchestra, acts as much as an air traffic controller than a conductor, hoping against hope that his choirs, choruses, dancers, instrumentalists, and string quartets don't go crashing musically into one another. He succeeds, and more, coaxes, with his colleagues, some fine music-making from his assembled forces. Sometimes, the Sony Centre acoustics, better now than before, but still cavernous, swallow the sound – the orchestra in Part One is very far upstage – but some fine sonorities, essential to Schafer's vision, still emerge. The 12-choir, 48-part Credo, for all its complexity, sounds as simple as a single church ensemble.

However, for all its size and thunder, Apocalypsis managed to speak most intensely and deeply when there was just a single voice and figure on stage – the remarkable Inuk throat singer Tanya Tagag, playing the Old Woman. Tagaq's thrilling, unsettling, otherworldly combination of throat singing, vocalization and movement, galvanized the production into another level of meaning instantly. In fact, from her appearance to the end of the first part of the program – actually the quietest section of the evening – Apocalypsis most closely reached its otherworldly goals. It was perhaps the most interesting lesson of the evening – to make us realize that the cosmic energy music releases is already inside us, somehow, and that music can find a way to open that door in many ways, loud and soft, extravagant and simple. Schafer's and Luminato's bold music-drama-ritual-theatre extravaganza knocked on that door many times, opened it often. 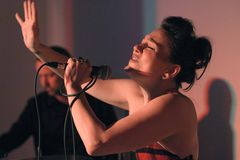 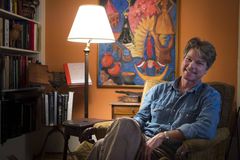