At her Cabbagetown studio, the luthier Linda Manzer talks about the organic nature of her trade. Holding a guitar of her invention, she says you can't make wood what it is not, that you have to co-operate with it, that you have to be honest with yourself. "You can't fake it," is how she puts it.

Of course, the honesty Manzer speaks of doesn't refer solely to the craft of guitar making. A novelist or a ceramist would agree with her; even a cocktail mixologist – the booze doesn't lie? – would find common ground here.

As would a painter. The guitar Manzer cradles is a salute to the Canadian landscape rock star and Group of Seven ringleader Lawren Harris. It's a doozy, untraditional with its grooved ridges on the bottom, icy-blue splashes of colour on the top, big mechanical drawing on the back and a second neck thrusting outward from the body like a Harris-y mountain peak.

The acoustic instrument is part of The Group of Seven Guitar Project, an exhibit commissioned by the McMichael Canadian Art Collection and set to open on May 6, in time for the country's sesquicentennial summer.

Seven masterwork guitars were made by seven of the country's top luthiers – each instrument an homage to a particular Group of Seven member. An eighth instrument (a baritone guitar that honours the rough-cut woodland enthusiast Tom Thomson) was a creation by committee.

While the project will be seen as a unique commemoration of Harris, A.Y. Jackson, Arthur Lismer, et al, what it really represents is a party thrown for the Canadian guitar makers themselves, a group that has carved out an impressive standing in the luthier world. Seven guitar-makers, then, as a loose-knit, supportive collective – a group, for lack of a better word.

Manzer, well known for the four-necked Pikasso Guitar she designed and built for the jazz guitarist Pat Metheny, refers to the project as an "amazing journey of discovery."

That discovery began with her visit to the National Gallery of Canada, where she saw a collection of Group of Seven sketches in a back room. Thinking about the support the artists had for one another, she began to draw a comparison to her own experiences in the 1970s, when she was one of the first six apprentices to work with the master guitar-maker Jean Larrivée.

Doing the math wasn't difficult: Group of Seven, seven luthiers, hmmm. And neither was it very hard to get the other luthiers – Sergei de Jonge, Tony Duggan-Smith, David Wren, George Gray, Grit Laskin and the guitar-making godfather Larrivée – on board.

Matching a luthier with a Group of Seven artist was an organic process – no drawing of straws involved. Duggan-Smith had lived in a house once lived in by Arthur Lismer, so that was an easy pairing. Laskin was attracted to the portraits of F.H. Varley, and so on. Manzer was drawn in particular to the 1930 oil on canvas Mt. Lefroy, a snow-capped quintessential Harris depiction. "If Lawren Harris made a guitar, what would it look like?" she thought to herself. "And if one of his paintings morphed into a guitar, how would that look?"

The result, which won't be unveiled until closer to the exhibit's opening, is an exotic six-string acoustic model with an extra neck that holds an eight-string harp-like offshoot. "Technically, it was quite hard to do," Manzer says. "But I think the result is a little controversial, and I had fun doing it."

The next step was an audition. The folk-rock icon Bruce Cockburn, a friend and customer of Manzer's, would give the guitar a playing. Reached in San Francisco, Cockburn described the guitar as a "pretty spectacular piece of sculpture, which manages to sound decent as well."

Cockburn, who has sung about trees in forests but has never made paintings of them, wrote a song specifically for the guitar that will be featured in documentary film on the Group of Seven Guitar Project. The Mount Lefroy Waltz is a solo instrumental in F minor, played by Cockburn with the strings capoed at the third fret, with the strings tuned D-A-D-G-A-D.

"I tried to come up with something icy sounding," Cockburn says. "The guitar favours the higher frequencies, and I tried to write that into the piece. It played very well. I was even able to use the 'harp' strings that are part of its architecture."

The process of making the guitar was a lengthy one. Manzer spent more than two years just researching Harris. The turning point in her study was reading his letters to his confidante and fellow artist, Emily Carr. "He was a cheerleader for her, and the things he wrote to her about being brave became my inspiration from him," Manzer says. "I took those words to heart."

Each of the luthiers worked on their individual guitars on their own, but in talking to them all, Manzer believes their processes were similar to hers. "I was going to do what was best for my journey of discovery of Lawren Harris," she says. "I think we all did that."

As Manzer says, the wood doesn't lie. And neither does the muse. 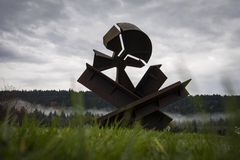 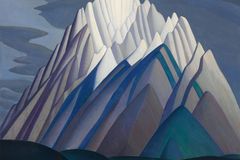