It's been three years since Jeanne Lamon retired as music director of Toronto's illustrious Tafelmusik Baroque Orchestra. The new kahuna is Elisa Citterio, a hot-shot Italian violinist who makes her debut this week as the orchestra's director with A Joyous Welcome, an appropriately titled program that not only opens Tafelmusik's 2017-18 season, but ushers in a new era as well. Not entirely comfortable conversing in English, Citterio answered our questions by e-mail.

When you were brought in as a guest conductor last year, did you feel it was a sort of audition for the job of Tafelmusik's new music director?

At that time I knew about the search process and that there were a few candidates being tried out. Everyone at Tafelmusik welcomed me so kindly that I almost forgot that I was doing an audition.

The news release announcing your hiring heralded a "new era" for Tafelmusik. What will the new era entail?

For the precise reason that Tafelmusik is so well-rooted, it's natural to expect changes. We have a wonderful team and we can build on what they have achieved under the excellent guidance of former director Jeanne Lamon. I am looking forward to creating more educational possibilities for children, to attracting a wider variety of people to our concerts, to commissioning new works by Canadian composers, to trying some experimental programs and to touring in Europe, especially Italy.

What about musically? A quirkier style perhaps, or looser?

Jeanne Lamon has created a very recognizable style, and the musicians have a way of playing that is very solid and efficient. It would be easy for any director to put their stamp on Tafelmusik without distorting the orchestra's characteristics. My objective is to respect the musicians' sensibilities and their ensemble playing while adding my own personal interpretation. An explosive mix.

Is there a concert program this season that is representative of the changes you're making?

This season was mostly done when I signed my contract, so I worked on just a couple of programs. A Joyous Welcome, starting this week, will be the first concerts of the season. And there's Elisa's Italian Adventure in October. Both of them are representative of myself, but the following season will be totally done under my artistic direction. Thank you for your patience.

If I have to think of one word about Tafelmusik, it's family. Everyone shares their ideas and opinions and each result is the fruit of a team effort. My first objective is to share all aspects of musical life at Tafelmusik while being conscious of being the person who has the ultimate responsibility for certain choices. I think this aspect of my personality is in line with Tafelmusik's philosophy.

If someone was unfamiliar with Tafelmusik, which recording by the orchestra would you suggest they listen to and why?

The recordings of Beethoven's symphonies, to show that Tafelmusik can play much more than Baroque music very well.

How about yourself? Say you've had a rough day at the office, which recording do you listen to when you get home?

Bach's The Goldberg Variations, since it reminds me a lot of my youth. Furthermore it is timeless music that always give you a different emotional experience.

Are you expecting rough days at the office? What's your biggest challenge?

My big challenge is English. How much more would I be able to say in Italian!

Tafelmusik'sA Joyous Welcome, under the direction of Elisa Citterio, runs Sept. 21 to 24 at Koerner Hall and Sept. 26 George Weston Recital Hall. Information at 416-408-0208 or tafelmusik.org.

Vancouver Opera scales back festival, beefs up season and tightens its belt
September 15, 2017 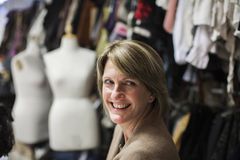 Conductor Kent Nagano to leave Montreal Symphony Orchestra in 2020
June 29, 2017
Carly Rae Jepsen’s synth-pop goes symphonic with the TSO
June 15, 2017
Follow Brad Wheeler on Twitter @BWheelerglobe
Report an error Editorial code of conduct
Due to technical reasons, we have temporarily removed commenting from our articles. We hope to have this fixed soon. Thank you for your patience. If you are looking to give feedback on our new site, please send it along to feedback@globeandmail.com. If you want to write a letter to the editor, please forward to letters@globeandmail.com.
Comments