An hour before I'm scheduled to meet Emily Haines at a Queen West café in Toronto, her publicist sends me an e-mail with a change of plans: "Emily is going to ride her bike over and bring a bottle of rosé to the park."

It is 29 C in Toronto, mid-May, and the denizens of Trinity-Bellwoods won't let you forget it. After wading through a sea of shirtless Frisbee bros – the sort that call to mind Haines's searing, "You got a modern loft and a new tattoo of your own name" lyric – I spot her near the baseball diamonds, blankets hospitably laid, bottle of Veuve at the ready. I had presumed she would favour subtlety, but to flag me down she rises to her feet, criss-crossing her arms in the air like a ground worker on a runway.

Earlier on this particular day, Haines has been at a rehearsal with Broken Social Scene, of which she is a member, and with whom she will soon go on tour. (The day after the terrorist attack in Manchester, Haines opened BSS's show there with Anthems for a Seventeen-Year Old Girl.) There's a lot of chatter in Toronto about the current BSS revival. But Haines has an ace up her sleeve: on Sept. 15, after 10 years, she'll release a solo album.

Haines is best known as the unstoppable lead singer and keyboardist of Canadian rock band Metric, whose latest album, Pagans in Vegas, came out in 2015. Those present for the group's early days, long before they headlined Air Canada Centre, will recall Haines in unbridled rock-star mode – sweat flying from her bangs and landing on the die-hards in the front row, ritually cranking her head to the drum beat, hands on hips, leaping into the audience, writhing on the stage floor while her bandmates played on.

In 2006, Haines released her solo breakthrough (not her solo debut per se, lest we forget 1996's Cut in Half and Also Double) under the moniker Emily Haines & the Soft Skeleton. That album, Knives Don't Have Your Back, is raw and devastating, owing in large part to the death of her father, poet Paul Haines. After that came an EP, and then the Soft Skeleton was stowed away as Haines returned to Metric. Until now.

Called Choir of the Mind, Haines's new 13-song offering was recorded in late 2016 at the west-end Toronto recording facility owned by her Metric bandmate and long-time creative partner, James Shaw. She produced it herself.

"The through-line of this record is a fascination with feminine strength and what that looks like," Haines says, with a sense of conviction. "Often, we're presented with either vulnerability out of innocence, and that's celebrated, or a sort of hardened, leather-jacket-over-your-heart, 'I've been through it all' toughness, which I refuse to become. I refuse to become tough. The process of making this record was about going into those places but bringing out light. This isn't a record that brings you down."

Knives Don't Have Your Back, by comparison – goddess bless it – was. Lines such as, "If you find me hide me I don't know where I've been" and, "I wake up lonely" put grief and depression bluntly, slowly bloodletting the experience of loss. Glimmers of reclamation – "there's no replacement for places, I'll always love you, you're mine" – felt more like a grasp than a gain. It was an album that offered listeners a vocabulary for grief, for shame, rejection and the guileful gamble of intimacy.

On Choir of the Mind, Haines retraces her steps and comforts the woman she was then. A considerable faction of Haines's fans are slightly her junior. To see her come back from the Knives era zesty, wiser and generous is reassuring.

"Having not had kids yet, I was haunted by the idea that those parts of you just don't develop," says Haines, 43. "What I'm feeling lately is that those parts are fully developed, and informing what I can bring to my work and to my friendships and to my life."

There is something spiritually maternal about Choir of the Mind. (Haines notes that the album was recorded on a grand piano from 1850, its presence in the room that of a matriarch.) On Wounded, Haines pleads for the relief of getting over it – "Girl you got a wounded look, give it a rest … isn't it behind you yet" – then retells the story like a lesson. "It's a conversation with myself and a conversation with that sister that you have, that is you," she says.

Even beyond her lyricism, Haines appears to now embrace the role of altruist. When someone else's napkin blows through the park, she leaps up and chases it down, lest it become litter. She's also just finished co-producing an album for the Toronto band the Beaches. ("Rock 'n' roll is definitely in the hands of 19-year-old girls," she says.) And she's become involved in a charity, the She Decides campaign from Global Citizen, which raises funds for female reproductive health care around the world.

"The construct of the chick at the keyboard fronting a rock band seems to cry out for a certain kind of attention, as though I'm making a statement, but I never have been," she says. "There's nothing about what I'm doing that is about highlighting my specialness. I am allergic to that idea. It's the opposite. The deepest thing that you can find is actually the place where you connect with all of humanity. Everything I do is about seeking that universality with people."

At some point during the writing process, Haines, whose middle name is Savitri, flipped to a random page of Sri Aurobindo's 24,000-line poem, Savitri: A Legend and a Symbol.

"Everything I wanted to convey, a feminine force, a strength that is soft, was written in this female pronoun. You never get to hear the female pronoun like that, unless it's about a car or a boat," she says. Haines used lines from the page to complete the song Choir of the Mind – repeating a favourite, "She serves no aim but labours driven by a nameless will," throughout our conversation. This is an album for the sake of it, she says. Her impetus is unknown, and that's okay.

I believe her, but what of all those eviscerating lyrics over the years?

"That doesn't fill me with hate, it's just like, I'm calling that, especially if it's haunting me. It's a way of emancipating yourself from whatever prison somebody is trying to put you in, like the hippie easygoing guy who's actually the most passive-aggressive and mean person you've ever encountered."

One gets the sense that Haines has faced a reckoning.

"Yeah, before you saw me open for Imagine Dragons, I jumped off the speaker stack on live television in downtown Toronto. … Nobody owes it to me to know the work that I've done, but all kinds of people encounter Metric now and go, 'Awww she's cute.' Be my guest, but it goes all the way back to nothing, literally four people sharing an expired PowerBar and living in one room. I wasn't always groomed. I didn't have a hair straightener. … You reach a certain age and you professionalize."

Parts of the album that would normally have become string arrangements were instead turned into layers of vocals, the resulting impression being "a lullaby over a panic attack," according to Haines – an apt way to describe this phase of her work, perhaps. "I held myself to a level of perfection that was just a source of stress," she says of years previous. "I've had a really good time slowly, incrementally reducing those heights and finding that no one notices the difference. For us starting out and doing everything on our own, there was a sense of having something to prove. I don't have to prove that any more. I got the job."

On my way out of the park, I look back to see what Haines is doing now that she's alone – as alone as a celebrity in the middle of Trinity-Bellwoods can be, that is. Is she Emily Haines the vehement beast or is she Emily Haines the introspective elder? Of course, she is both. To borrow a line from Choir of the Mind, by way of Sri Aurobindo, Haines is "the unfinished creation of a changing soul." 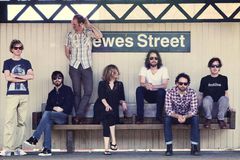 Arts & Crafts' two-day Field Trip is a top notch music festival
May 31, 2017
Follow us on Twitter @globeandmail Opens in a new window
Report an error Editorial code of conduct
Due to technical reasons, we have temporarily removed commenting from our articles. We hope to have this fixed soon. Thank you for your patience. If you are looking to give feedback on our new site, please send it along to feedback@globeandmail.com. If you want to write a letter to the editor, please forward to letters@globeandmail.com.
Comments