Montreal's contemporary art museum will be hosting an exhibit later this year devoted to the life and work of Leonard Cohen, one that was conceived with the late singer-songwriter's blessing.

"We wanted to make sure that Leonard would not be against an exhibition like this, because we know he has a certain humility and we didn't want to overstep our welcome," museum director and chief curator John Zeppetelli said Thursday.

Zeppetelli said organizers heard back from Cohen's longtime manager, Robert Kory, who mentioned the artist was delighted with the strategy behind "Leonard Cohen: A Crack in Everything."

What is planned is a five-month exhibition inspired by Cohen's music, poetry and artwork that will include installations combining visual art, music, writing and virtual reality by artists from 10 countries.

It is slated to open to the public Nov. 9 and run until early April 2018. Cohen died last Nov. 7 but his death was only announced a few days later.

Musicians including Ariane Moffatt with the Montreal Symphony Orchestra, Moby, Jarvis Cocker, Jean Leloup and The National will record covers of Cohen classics strictly for the exhibit.

Zeppetelli said he and guest curator Victor Shiffman, along with the various artists, have spent more than two years organizing the event.

And while Cohen was happy with the project, he always declined as one artist after another sought to speak to him about their ideas.

"He did say that he would not participate personally in the production of the works and the elaboration of ideas," Zeppetelli said.

"It was like: 'You've got these amazing, world-class artists, why would they want me? I'm making everything available to you, all my music is out there, my literature is out there for you to use, you can do anything you want. I just don't want to be bothered'."

Organizers didn't know how ill Cohen was and his death was a shock, with Zeppetelli assuring the artists the project would move forward.

The event is part of Montreal's 375th-anniversary celebration program, which provided funding key to setting up the exhibit.

Zeppetelli said Cohen's name came up while brainstorming an anniversary project and he described him as "profoundly local but instantly planetary."

"I cannot think of another figure from Montreal who has this kind of (resonance) throughout the world," Zepetelli said. "Who has the resonance that Leonard Cohen has?

"So there's this beautiful tension between local celebration and an icon that can easily cross borders."

CBC-Radio Canada, presenter of the exhibit, and the National Film Board of Canada both provided artists access to their Cohen archives. The public broadcaster is also doing its own Cohen-related projects.

Concerts, an academic conference and other events will also be held in parallel with the exhibit itself, Zeppetelli said.

Cohen is also the subject of two duelling murals in the city.

A nine-storey work by artist Kevin Ledo just off Saint-Laurent Boulevard in Cohen's old Plateau Mont Royal area is currently being erected as part of Montreal's Mural Festival, which runs until the end of the week.

A 20-storey mural that will go up on the side of a downtown building later this year is expected to be among the largest in the city.

With her Leonard Cohen tribute, Feist found a way to say goodbye
April 9, 2017 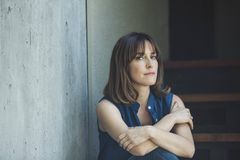 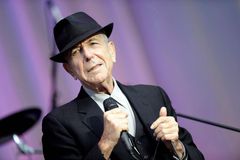