What does a supplicant ask the Queen of Pop when an audience of only seven minutes is granted?

The pressure was high, and mounting. Madonna was coming to town to celebrate the latest outlet of the Hard Candy Fitness chain, which she co-owns, and I had a legion of tweeps on the edge of their seats.

I put out the call on Twitter, asking what people wanted to know. Soon came a tsunami of breathless enthusiasm. I could feel the weight of their virtual presence. I felt like Katniss in Hunger Games: I was the real human avatar out to do their bidding, to boldly speak to their queen.

"Once in a lifetime opportunity!" one tweeted to me. "Enjoy your time with the queen! So jealous … but in a good way," said another. They wanted to know if she is going to collaborate with Sarah Brightman or Adele; if there might be a new album in 2014; where her courage comes from; what she thinks of the new pope.

I felt a mother's weight of responsibility for her children. Could I make my invisible brood happy? I admire Madonna, mostly for her tenacity through a 30-year career, but I am not a big fan.

The scene inside Hard Candy on the Yonge Street strip was hot and sleek and sexy, a palace of glass and mirrors, with huge images of the queen's lips and hips and eyes plastered on the walls. She was intimidating in one dimension. I couldn't imagine three.

After an interminable wait with fearsome reporters and ripped gym instructors, I was escorted down a hallway to a small room. I found her, seated in a small office chair, slumped a bit, her three-inch high heels kicked off. Her left foot, which she injured in a dance routine, was still bandaged beneath fishnet stockings.

"It is better," she offered. "I'm wearing high heels, which I was told not to do. But sneakers don't look good with this dress."

She looked tired, beautiful but fragile with faint shadows under her eyes, a few wrinkles. I was expecting her to look plastic. But no, she was real and tiny. I felt a bit like Dorothy going behind the curtain of the Wizard of Oz.

She turned to me and batted her eyelashes. I met her gaze and then – I couldn't help myself – looked down briefly at her chest, at those smooth hillocks above which dangled a small, bejewelled cross. I began.

With all her ventures, I wondered how she chooses which one to pay attention to. "It depends on the day," she answered with a small shrug. "I have to divide myself into many categories. I'm working on my philanthropic charitable ventures. I'm fighting for human rights. I'm fighting for using art for a platform to bring people together [Art for Freedom]. I'm working on my own art, whether that's music or filmmaking. I'm raising four children. I'm opening gyms around the world to encourage people to get in shape and feel good about themselves; bringing art through dance to gyms to make my gyms different from other people's."

I could tell that her responses are a form of noblesse oblige, a case of a queen agreeing to satisfy the needs of the plebian only because someone has told her she must – to promote the gym. As a seven-time Grammy winner with a net worth now thought to be close to $1-billion, she floats above the media cut-and-thrust, as elusive as real royalty, largely scrutinized from afar because she rarely deigns to subject herself to interviews.

But I wouldn't be discouraged. I thought of my tweeps and pressed on, asking if she feels that age has helped shift her focus at all. "I hope we all change," she answered lightly. "Of course, my interests and my focus change and become more diverse, more worldly. At the same time, I am interested in the simple basics, which is I love to dance and I love to make people dance." The gym thing, again.

I mentioned how she is always pushing herself. Her tours are feats of great physical stamina. How does she manage that? "Hard Candy!" she announced.

I smiled and asked about the possibility of a new album. "Oh, that 'about' [pronunciation] is so Canadian!" she said, laughing gently. "Well, I'm right now in the process of talking to various co-writers and producers and talking about where I want to go with my music."

Madonna is at a powerful time in her life: Many women in midlife act with impunity, finally free of caring what the rest of the world thinks of them.

Madonna not only has that advantage, she's also a global cultural icon who is answerable only to her own creative whims. It's a double-whammy confidence.

Her answers are polite but tame. Clearly, she feels no need to give information.

That smile of hers is coy, more about her own self-satisfaction than an invitation to be friendly. I asked if it annoys her when people say she's too old at 55 to wear certain things and act young. "You just have to keep doing what you're doing," she replied with a small sigh. "I think not only do we have to live in a homophobic society, but we have to live in an ageist society, too." She looked serene as she said this, as though it's a bothersome issue she has meditated about and decided to let go of. "Once you reach a certain age, you're not supposed to do certain things. I don't really know where that came from."

But, surely, it makes her angry, I persisted. And perhaps she feels determined to defy it by wearing grillz on her teeth or wearing certain clothes. She smiled more widely at that. "It's limited thinking. So yeah, it does," she replied, sounding the most animated she has during the entire speed-date interview.

She stood at that point and proffered a gloved hand to shake. She was wearing black-leather fingerless gloves with shiny brass knuckles. "What's with the gloves?" I asked in one last, lame exchange. "Why not?" she answered. "I like gloves." I nodded meekly, making my retreat.

It was now 9 p.m., and Madonna had a Hard Candy class to lead with a small group of fans who had won the chance to sweat with their icon. Media were not allowed, of course. And I had done my sweating for the evening. 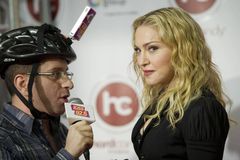 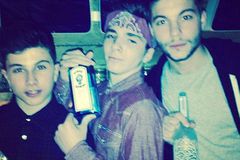 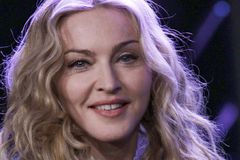