"This Is Not Real Life," read the huge screen behind the stage at the Wednesday night Toronto stop on Jay Z and Beyoncé's summer tour, On the Run. Unfortunately for the tens of thousands of people in attendance, the narcissistic, musically flat, two-and-a-half hour investigation into the concept of boredom itself that followed was all too real. For those who couldn't be there to hear the borderline-functional jukebox themselves, here are the five worst things about a truly dismal evening:

1. Not content merely to put on a "concert experience," Jay Z and Beyoncé have crowned themselves filmmakers – or at least film stars, projected on the big screen in vignettes throughout the night that served both to illuminate the show's scattered themes and allow its stars to change costumes. The opening montage was one of the evening's lowest points, offering superficial nods to film noir, French new wave, spaghetti westerns and something sort of resembling romantic comedies. If only we'd known at the time that the confused mess was a harbinger of the terrible things to come.

2. Do you like any songs by Jay Z and/or Beyoncé? Then this is probably not the extremely expensive ticket for you. Because only a handful of the 40-plus tunes begun were actually finished, and even some of those that were completed were interrupted with inane detours into doo-wop sing-alongs or, even worse, attempts to rally the home crowd in "T. Dot," as Jay Z called it, quietly thanking the local-slang crib sheet that Drake must have made for him.

3. Remember that great remix of Diamonds from Sierra Leone on Kanye West's Late Registration – the one with the killer Jay Z verse? So does Jay Z, it turns out! But the bad news is that that's the only part of the song he was able to perform. Throughout the evening, the audience was reminded of the fact that almost every aesthetically relevant moment Jay Z has mustered in the last half-decade was at the behest of (or at least alongside) Kanye, his one-time producer. Tracks off 2011's Watch the Throne sounded especially bad, with Jay at one point relying on the crowd to holler their way through a verse originally rapped by West.

4. Perhaps it's inevitable: When making a Broadway-style musical out of the life's work of two great artists, you're bound to run into pacing problems. How, after all, do you scatter the hits? How do you allow each megastar a spotlight of her or his own? How do you tuck those tear-jerking ballads in amongst the bangers? If you're the person in charge of structuring the On the Run tour, the good news is that none of these questions even matter anymore as you've already ignored them completely.

5. How does one end an indignity with dignity? Jay and Bey proved no match to this eternal quandary, leaving the stage without an encore, and with a barely articulated thank you. Sure, the swift exit was clearly planned, and perhaps a victory lap is too much to ask after two plus hours spent doing half-hearted karaoke. But as the house lights quickly zapped on in the arena formerly known as the SkyDome, one couldn't help but feel that, despite all the evening's over-rehearsed patter and lukewarm choreography, the reigning queen and king of pop could have left a bit more blood on the dance floor.

Beyoncé and Jay Z prove it: Genuine bliss is just a golden sippy cup away
January 30, 2014 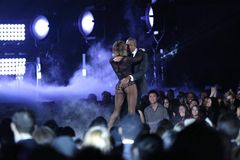 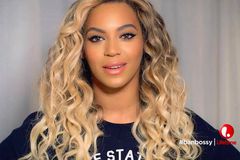 new
University of Victoria to offer course on Beyoncé
July 3, 2014 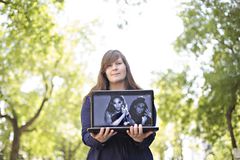