The man sitting across from me, in some yawningly elegant hotel suite, is one of the West's best musicians, the "godfather of grunge" and a two-time Rock and Roll Hall of Famer. He's also a hobby filmmaker, a humanitarian, an entrepreneur. He has a Grammy or two.

Should I tell him?

Neil Young doesn't just refuse the part of a rock star; he looks like he's never even met one in person. You wouldn't guess that he's pals with Bob Dylan, the only better songwriter of their time, or that Kurt Cobain quoted his infamous lyric in a more-infamous 1994 suicide note. "It's better to burn out than fade away," you know. But Young himself is the anti-burnout. Now 66, he has 33 studio albums: solo; with Buffalo Springfield; and with Crosby, Stills, Nash & Young. His 34th – Psychedelic Pill, with Crazy Horse – arrives next month.

Forty years ago, Young was hanging out in Winnipeg folk clubs with Joni Mitchell. Last year, he beat Justin Bieber at the Junos. Today, we're talking about everything in between, as traversed in his new book, Waging Heavy Peace.

"Where do you want me to sit?" he says. Then he waits. He wears a blue-plaid flannel of dubious vintage, black Gore-Tex boots, and a plain gold wedding band. If he were any gentler or less assuming, or more faintly amused by the whole ordeal, he'd be my own father – although I suspect it's a good thing he's not.

Girls, cars, guitars and trains are the leitmotifs of Young's lighthearted, folksy memoir, now out in hardcover. If you want to know why Young has written a book, just read it. He will tell you.

"Writing is very convenient, has a low expense, and is a great way to pass the time," he writes. "I highly recommend it to any old rocker who is out of cash and doesn't know what to do next."

Young tells you things in a manner so candid, so unself-consciously simple, that you assume he's telling you everything. You believe said things, even when he writes that they might just be confabulations.

(He does not actually say "confabulations." I think his favourite word is "cool.")

I ask him why. "When you've got a lot of memories," he says, in that harmless growl, "you've gotta wonder where they're all coming from."

Young seems to wonder much more than he thinks. "Fiction is just as much a reality to me as reality," he says, later. "It's just on another level." He reconsiders momentarily. "Another plane."

As a kid growing up first in Winnipeg, and then a no-name Ontario town, Young's nickname was "Windy." His dad, the late sportswriter, journalist, and author Scott Young, called him that. Scott comes up a lot. Young is happy I write for his "dad's newspaper," so happy he even humours me when, unauthorized, I offer him a weekly column; we can call it Windy City.

"I don't know why he called me Windy," he says with a laugh. "I guess it was because I had all these crazy ideas."

He still does. Young's plans for everything from eco-powered classic cars to his personal archives, from his charity foundations to feature films, practically split the book's spine. A crazy idealist, he calls himself. Or a dreamer, a dreamer of the golden dream, having moved to California for good in '66. Or sometimes, still, a hippie.

Don't let his Zen-master slang fool you, though. Even the book's Gandhiesque title comes from a conversation about Pono, his almost foolishly ambitious project to restore full audio quality to digital music. Without full audio quality, he says, music won't take you into "the spirit world." One gets the sense that this – never mind the 33, no 34, studio albums – is the legacy he craves.

In the book, a friend suggests he's up for a big fight with Apple. Nah, says Young. "I'm waging heavy peace."

In way-back days, he was often taken for a political songwriter, like Dylan. But apart from the 1970 protest song Ohio, I can't see it. Neither can he. Still a Canadian citizen, not registered to vote in America, he says he follows politics only because you can't get away from them.

"I vote with my creations," he says. "That's what I do. For me it works. I'm not registered to do anything. I'm not very consistent, politically. I'm more into what I'm thinking, how I feel, than I am being a Democrat or a Republican or a Conservative or a Liberal."

At my raised eyebrow, he shrugs. "I'm a people person. I don't know about political structures."

Reading the book, it's believable. Young wrote Waging Heavy Peace not chronologically, but as things came back to him, and says he takes life the same way. Getting his green card made him love capitalism: "America is great! Capitalism rocks!" he writes, without traceable irony. But when David Geffen threatens his artistic integrity, he resents commodification with the fervour of a first-year Marxist.

After two busted marriages and some like-father-like-son womanizing, Neil married Pegi and kept it that way. He has three children, of whom he's ferociously proud. All his friends are old friends, and he works with the same guys, from producers to roadies, till they leave or die.

He thinks a lot of guys are genius, and treats a lot of girls like goddesses, but mostly he seems loyal to the whole impossible goodness of humanity.

Besides people, he doesn't stick to much.

"I'm a changeling," he tells me at one point (full disclosure: We are discussing spirit animals). His sound is mutable, his non-musical projects erratic. He takes almost no advice: Having never written a book, or ever been "much of a reader," he rejected more than half the edits to his manuscript. This defiance has produced astounding records (Harvest, Everybody Knows This is Nowhere) and confounding flops (Trans). But whatever, man: "I feel good about it," he'll say about his work, or he won't say anything.

In 1975, Cameron Crowe called him "the most enigmatic" of all the Buffalo Springfield or Crosby, Stills, Nash & Young superstars. When Crowe turned off the recorder, Young said, "Keep in mind, I may remember it all differently tomorrow."

Now, most of Young's tomorrows are yesterdays, and he shows no signs of fading.

"You know, I might have been an addict," he says, "but I didn't have the gene problem, where you really turn out to be an alcoholic. I just decided if I was going to stop smoking weed, I'd stop drinking, too."

He hurts a little, himself: The book was begun when he stubbed a toe and "couldn't play guitar or go for a walk or do anything." Today, the toe's good, but his wrist is bandaged. Sometimes his back just kills. But on Wednesday he begins a short tour through Canada, and then he plays a concert for Farm Aid, one of his charities, and then for California's Bridge School, another one.

If there is anything Neil Young cannot do, it's sit still.

Maybe he's got a runaway heart, or maybe he fears that if he's still for a moment, he might stop altogether. Certainly, Young seems most himself in motion. His favourite part of the book is when, at the end, he drives dreamily solo down sun-soaked roads. One of his favourite childhood memories is of bicycling.

"All along the Assiniboine River," he says, "there was this bike trail, and we'd go up and down, up and down and through the trees."

He grins dreamily, more pagan than punk any more.

"That was a good place." 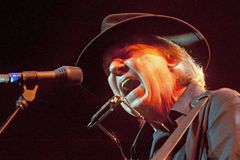 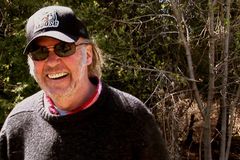 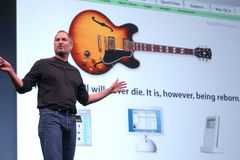