One minute you're toiling away at your rock 'n' roll from your parents' basement, the next you're plucked from obscurity and land on the cover of Rolling Stone. That's when the pressure was really on for the Sheepdogs.

"We needed to deliver," says bass guitarist Ryan Gullen. "So much of our entire year was about proving ourselves to people. We had to prove that we weren't just a flash in the pan."

A new documentary chronicles the band members' efforts to capitalize on their Rolling Stone triumph, with opportunities they couldn't have imagined in their wildest dreams just a few months earlier – touring as the opening act for Kings of Leon, whose music they revered, and recording an album with Patrick Carney of the Black Keys, another band the Sheepdogs idolize. The doc, The Sheepdogs Have at It, had its world premiere at the Whistler Film Festival on Sunday.

"I think I sort of swooped in at the luckiest moment, when things were very critical for them. There was never any doubt that they would on some level rise above it. But it was interesting to be standing with them at that precipice," says director John Barnard. "All of a sudden they had something to lose."

In early 2011, the Sheepdogs were broke and touring in their beaten-up van to any city that would have them, playing to weeknight crowds of "between zero and 15 people" as drummer Sam Corbett puts it in the film. Then their demo was submitted to Rolling Stone magazine for a contest that would put its first unsigned band on the cover. After months of competition, the Sheepdogs were announced as the winners of the Choose the Cover contest in August, 2011.

"Going from basically obscurity to having everybody kind of having their eyes on you was a tough thing to get used to at first," Gullen says. During an interview from Montreal – where the band was on tour earlier this week – the bassist talked about learning they had won the contest weeks before the public announcement (that moment, during a photo shoot for that cover, was captured on film and is included in the documentary).

"We couldn't tell a single person. We had a contract where they told us they would sue us if we told anybody, so it was a lot of pressure. It was like a month and a half almost that we had to keep the secret," Gullen says.

But that pressure was nothing compared with what came next: the hit-or-miss, do-or-die situation, as Rolling Stones editor/record producer Austin Scaggs puts it in the documentary, to make their follow-up album, which they began recording last January in Nashville.

Film director Barnard experienced some pressure of his own in telling their story: He was hired to direct the project by Superchannel three days before what was supposed to be the first shoot – the band's first concert back home in Saskatoon since winning the contest, opening for Kings of Leon. Barnard took the job, but was completely unfamiliar with their music.

"I had a vague inkling that they had won some contest but I hadn't heard anything," he said this week from his home in Winnipeg. "I literally downloaded the record to play on my phone on my way to Saskatoon to get some idea of who these guys were."

The band agreed to participate in the film, based on guarantees that Barnard would not be invasive or stage any scenes.

"It wasn't exactly something I was champing at the bit to do," says Sheepdogs lead singer Ewan Currie. "But the guys assured us that they were going for more of a fly-on-the-wall type of style … so that appealed to me."

In the end, the film serves as a document of a time the band can barely remember – a surreal period that saw them rubbing shoulders with everyone from their rock 'n' roll idols Kings of Leon to Rolling Stone management to the contestants and judges on Project Runway. (Competitors for the reality show's menswear challenge designed outfits for the band – Currie's braids and lavender outfit were something to behold.)

"It allowed me to kind of sit back and I guess reflect on some of the things we did, that we almost didn't have time to think about when they were going on," Gullen says. "It's really neat to have that captured both for other people to see, but also for us. It was a really crazy moment in all of our lives. One of the craziest years we could have ever had."

The band's album The Sheepdogs, released in September, reached No. 1 on the Canadian charts in its first week. Now the group is touring Canada, "blown away" by the turnouts and the crowd enthusiasm, Currie says. "It's very rewarding for us, because our rise to notoriety was sort of in this kind of inorganic almost one-hit-wonder-ish kind of manner and now we're seeing the results of our hard work."

Essential tracks: The Killers, The Sheepdogs and more new songs you need to hear
July 16, 2012 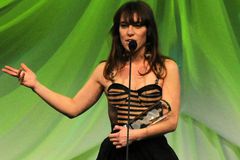 The Sheepdogs play it cool, the War on Drugs gets familiar
December 11, 2011 The Sheepdogs still driving a van after winning contest
September 14, 2011 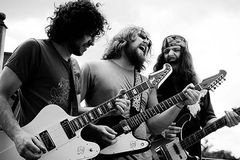 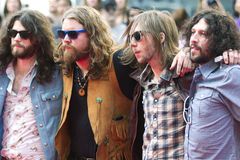 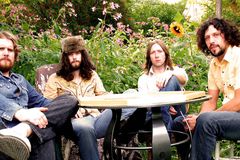