A droning noise shifts into a burst of sound, and in the light appears a dark monolith. A crowd draws close, first with skepticism. That soon fades away, though – and, enamoured, the masses climb over one another to get in arm's reach and paw at it.

This isn't the first act of 2001: A Space Odyssey. It's the Air Canada Centre, shortly after 9:30 p.m. on Tuesday. Riding atop a floating, light-adorned stage, it's Kanye West, slowly sweeping over the floor audience in the first of two Toronto performances on his Saint Pablo tour, backing his seventh record The Life of Pablo.

Kubrick's film provides a fitting metaphor for West. The 39-year-old has spent a decade and a half trying to prove himself in a world that would prefer to trounce upon or invalidate him. When he speaks his mind, it's a "rant"; and, in doing so, he's a "jackass." He is not a self-styled alien – like, say, Lil Wayne – but he's long felt alienated, first in music and later in fashion, fighting against an outsider status that's sometimes self-professed, sometimes pinned-upon. Like the unknown vessel from 2001, West would like to impose a message to his audience: In spite of the narrative others would have you believe, he's the one in charge.

And so in a light jacket and dark date-stamped Saint Pablo shirt, West began Tuesday with Father Stretch My Hands Pt. 1, as all of the lights blared upon the audience. The stage tilted and shifted; he performed it again. Beneath the swinging podium, the crowd coalesced, elated not just to watch West but to bask, dancing, in his shadow.

The early portion of his set was concerned mostly with Pablo songs and recent features – Famous, Pop Style, THat Part. The stage began to sway as West yelped "Swerve," on 2012's Mercy. It slid back across the audience as he rapped to All Day and Black Skinhead. Soon, he bounced into his classics, like Can't Tell Me Nothing. During Jesus Walks, he laid down on his platform to touch hands with the crowd, offering an Instagrammable, $199-plus-fees-and-taxes reenactment of Michelangelo's The Creation of Adam.

West's tours this decade have been master classes in personal one-upmanship. Playing behind the luxury rap of Watch the Throne, he and Jay Z performed on rising Technicolor pillars, adding a third dimension to the concert as the pair moved up, down, and around arenas. It was deliberate posturing to affirm his celebrity status. Then, supporting his sixth record Yeezus in 2013, he rapped and sang behind Margiela masks atop a constructed mountain, critiquing the notion of celebrity: he was both cutting himself down and perching himself up.

On Tuesday night, West's wavering stage gave him an aura of anti-gravity as he dangled and climbed, appearing to defy physics but suspended from a not-too-hidden cable. West performs with enough ease, and his songs are beloved enough to be memorized by whole swaths of arenas, that the stage brought a welcome sense of unknown to the show. During the long tail of Runaway – though not before playing the song's introduction twice – he explained that the stage was the latest extension of his passion for design. It was "something that allowed me to be close to y'all…An experience that allows you to be closer to your friends."

Saint Pablo's stage show is an innovation upon traditional arena concerts in a year West has spent upending tradition. When he released The Life of Pablo in February, he modified and added songs for weeks on end, disrupting the notion of a concrete album release. And even though Pablo was first a Tidal exclusive, he's registered his dissent for exclusive releases, choosing to err on the side of fan access.

This is the kind of imperfect openness West-watchers have come to expect. The Kanye West we glimpse on Twitter and TMZ, at the MTV Video Music Awards, and on his wife Kim Kardashian West's Snapchat can be a mix of might and bluster. The ascendant, meandering stage captures both the dichotomy and dynamism of West's ongoing struggle with celebrity: He at once exudes power over the audience and brings himself closer to it.

This was easily visible in the crowd that followed West around the Air Canada Centre, racing for the rare experience to dance around, sometimes under, one of the biggest musicians in the world. The sub-stage seemed largely male dominated, often charged with the aggressive air of a mosh pit. It raged on, generally regardless of tone or circumstance, including during Waves, which featured the recorded voice of Chris Brown just hours after the once-convicted felon was arrested on suspicion of assault with a deadly weapon. During the slower Heartless, however, the mass of dudes beneath the stage melted into a pool of middle-school wallflowers, cluelessly looking around. It was a graduate sociology thesis and massive potential insurance liability stitched together.

After a curfew-skirting two hours and another flick at Father Stretch My Hands Pt. 1, West faded into darkness with Ultralight Beam. With it, a real ray of light fell from the scoreboard, illuminating the centre of the arena. The crowd rushed toward it, throwing their hands out once to paw at the strange thing. West had slipped away, but he'd left a message behind. 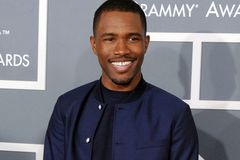