M.I.A. is complicated. And she hasn't rehearsed what she's going to say. By mid-afternoon on Saturday, the day after the release of her fifth album, AIM, she still hasn't prepared a speech she is to give that evening in Toronto to address the Canadian Tamils' Chamber of Commerce.

M.I.A., real name Mathangi (Maya) Arulpragasam, says it is the first time she will speak directly to a roomful of Tamil people, a surprising admission from someone who has been speaking for and about Tamils (and flare-ups of deadly conflict in Sri Lanka, where they are an ethnic minority) since she first scraped together a platform to do so in 2005 with an album, Arular, named for her father, a political activist.

Her latest work, which she says will be her last album, is a refinement of consistent themes such as migration and challenging cultural norms. After years of weathering a sometimes harsh spotlight, M.I.A. says what she most wants to do is make connections in an increasingly divided world.

As someone outside the Tamil community, you seem like the world's most famous Tamil person. Are you?

Well, I am! Which is why I have to address four generations. There were two seven-year-olds amongst the people who picked me up [at the airport]. So that was really interesting to visually see it did span across four generations and you have to address all of them. The last few years, I tried to do it through my art, but I just felt like I had to go and deal with stuff myself, you know, to not be so emotional.

It's different when you're writing a song versus being there in a room and making a speech? There's a different emotional tenor for you?

You have to sort of split your brain into becoming a role model where you say, "Look, whatever situation you get in is temporary." So then you have to go and actually define your future to show them you can find your future but obviously I don't do that very well for a Tamil, you know …

What do you mean?

If aspiration is to show them that you're the biggest pop star, I wasn't. Because I came from a war zone, relating to experiences of injustices that happen to other communities, it was important for me to address that in my work. And I think because of that, my opportunities did get curbed. So it was too difficult to explain to the Tamils because a lot of people would be, like, "God, why don't you just shut up and do it?" But to me, talking about them was really important. But even the Tamils at some points would be like, "Just don't, you know? [laughs]"

"What's wrong with you?"

Go get your money, be obedient, tick all the boxes, so you can be the biggest success you can be.

Yeah, like, it's me holding a Champagne glass in a swimming pool, like, "Here's success!" But that's not what I did.

We're doing a podcast that's all about race in Canada and we did one episode called The Most Visible Minority where we talked to people who are very high profile and racialized, such as yourself, to ask what it's like. The mayor of Calgary said it's an honour and the artistic director of TIFF said it's complicated. Where are you on that spectrum?

It kind of is an honour but I feel, like, it's complicated because I'm not sure what it means yet. I'm still working it out.

How do you describe the level of power you have in the pop world to effect change?

Well, this album is really about focusing on the survivors, that's why it's soothing and it's quite mellow. It's not an aggro record, because I didn't want them to keep going through that. Because what I realized at this moment in time is, actually, fame doesn't cure this. You can see in 2016, if a whole bunch of artists got together all across media, all across awards shows or whatever, if everybody said "black lives matter" together because they all share that experience, you can maybe try to change that thing. But what that's created at the same time is some sort of language where everyone's like, "Well, they can talk about that. So this person here has to talk about their thing."

So do you mean swimming "out of your lane" and Afropunk? [Earlier this summer, when M.I.A. publicly challenged whether Beyoncé or Kendrick Lamar would ever say "Muslim Lives Matter" or "Syrian Lives Matter," the controversy that ensued led to M.I.A. being dropped from headlining Afropunk, a music festival in London, and she tweeted that she had been told to "stay in my lane."]

Yeah, kind of like that. I think that's the next step, for people in the West to publicly digest the fact how they deal with these offshore problems in countries and minority groups … it's actually more connected than we think.

Yeah, I think that is the future.

But do you think people are ready to hear that?

You've said that this is your last album. You obviously have a lot of things you want to get said, so is music not doing it for you?

Well, now I have a kid and I want to make music but then I don't want to deal with having to be the art. Making a music video, I don't like the fact that I have to put myself in it. With Borders [her music video depicting refugee migration, which featured overcrowded boats and a fence], it worked because, "Oh, now you have an opinion on immigration and refugees?" Is that right only given to a journalist from the West? Someone said to me, "Oh, did you get a boat over? Because if you didn't, you can't talk about people coming over on boats."

I can't believe you let that bother you still.

Well, these are comments that are actually out there. I can be a Tamil but I can guess what a Syrian kid is going through. I think compassion exists but we're being told to dull it down and apply logic to it and sort of put it into neat packages because it makes it easy for social media. We're like, hey, it's really natural to be divisive and let's divide all these communities.

How are you going to dismantle those messages for your own kid?

Well, luckily, he's already mixed up. He's a Tamil and he's white and black. Also, he's politically or financially all of these extremes, you know? [Her son's father, Benjamin Bronfman, is an heir in the Bronfman family.] He's already the embodiment of those dots coming together.

What does it mean to be a survivor of the music and fame game at this point?

I'm not sure if I've survived the music and the fame game. I never really played the game.

You did do the Super Bowl.

I did do that, yes. I think sometimes fame was needed to say something. But fame for fame's sake, I don't really access that much. And that feeds back into my motherhood situation. He gets a very normal, boring me.

Colour Code, a podcast about race in Canada by the Globe and Mail, can be found at tgam.ca/colourcode 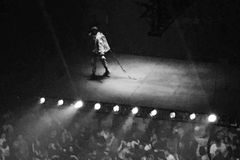 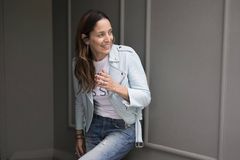 The magnificence of Mad Beyoncé on full display in Toronto
May 26, 2016 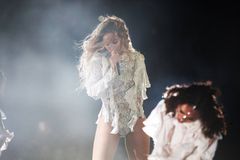