Baby I’ve been down, but never this down

I’ve been lost, but never this lost

He was 60 years old, and in the jaws of a blackness without end, and his old friends were dying, and one autumn morning Bruce Springsteen found himself alone on a beach in New Jersey with his paddle board and his tears. Not just any tears, either: “Bambi tears,” as he writes in his new autobiography, Born to Run. “Old Yeller tears. … Fried Green Tomato tears.”

But then he discovered, as many of us do at a particularly low point, or sometimes in a Bruce Springsteen song, that he was not alone. An old woman walking her dog happened across this bawling man, having no idea who he was – that he was the Brruuuuuccee of legend, the rock stud of a million dreams – and she did a simple thing: She asked if there was anything she could do to help. 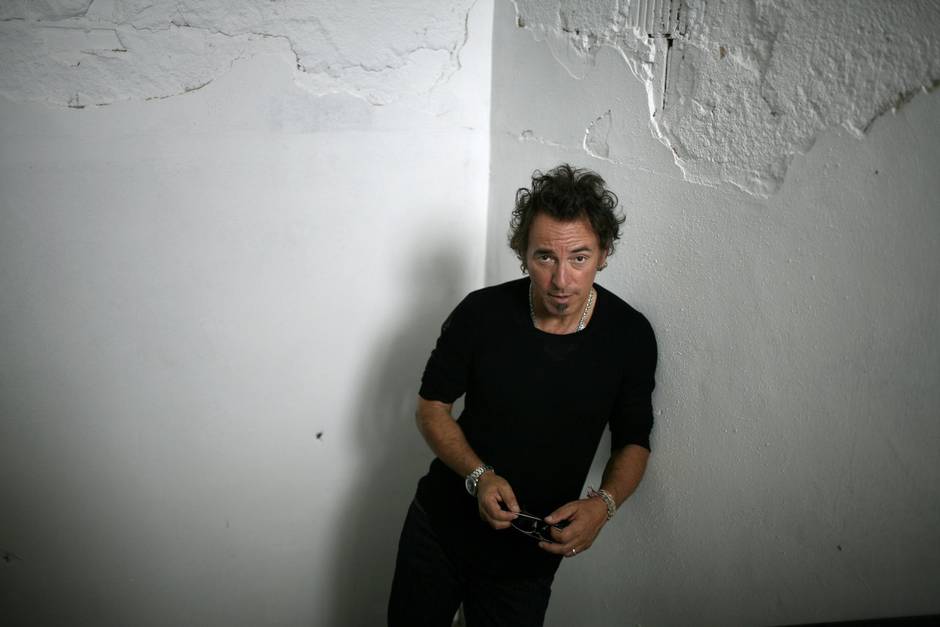 'In truth, offstage I never really had the ease or ability to enjoy myself very freely,' Bruce Springsteen writes in his new memoir, Born to Run. (Todd Heisler/The New York Times)

“I was sinking pretty low, and the beach was empty,” Springsteen says over the phone from New York. “It was in September. I’ll swim into November sometimes. I was going through a period of serious depression. This lovely woman saw me in some duress, and just started up a conversation. It was pretty sweet.”

It was a reversal of the usual course of things. Normally, he was the musclebound shoulder people leaned on: the members of his E Street Band, for 40 years. His audience, for just as long, getting high on those three-hour shows. The guy leaning out the window of his car on the morning of 9/11, yelling, “Bruce, we need you!” But even strong men crumble; they often do in his songs. So, to thank the elderly woman, he did the one thing he could think of: He promised her tickets to his concert. Rock ’n’ roll had saved his life, over and over; why wouldn’t he share the gift?

Possibly the woman went home with her dog and told the story of the strange man on the beach who offered her concert tickets. Possibly her grandchildren told her who the strange man was, and she went to the concert herself, and if she did she would have seen him come alive on stage. Nobody who has seen Springsteen live can doubt that it is where he is most himself. What’s interesting is that he admits it: “In truth,” he writes in his memoir, “offstage I never really had the ease or ability to enjoy myself very freely.” 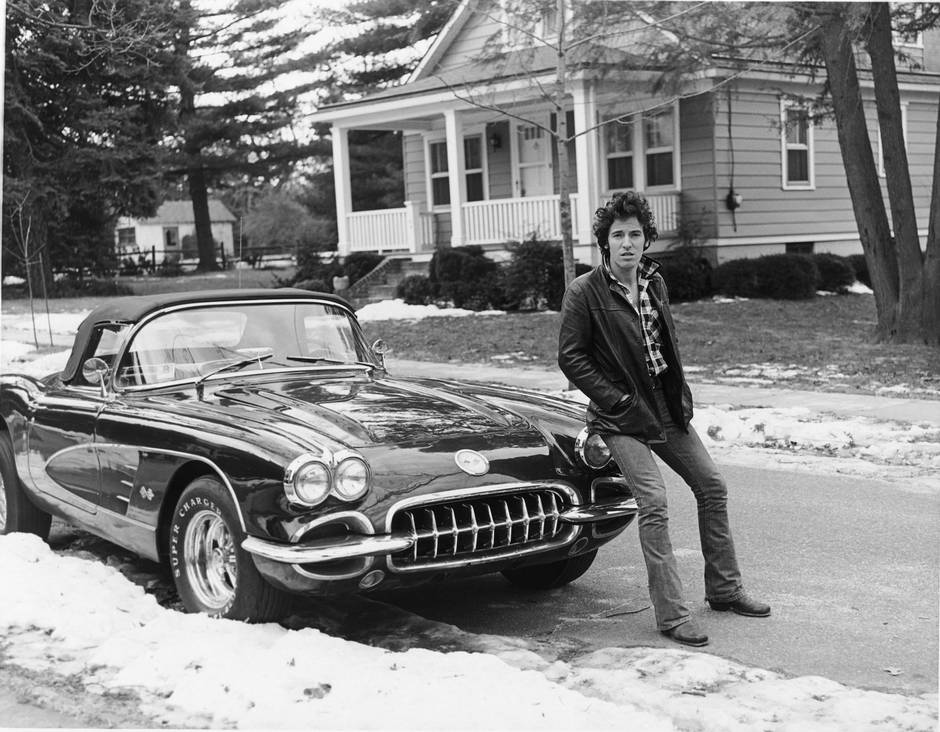 A 1978 photo of Bruce Springsteen with his Corvette. (Frank Stefanko/The Associated Press)

Over the phone, in his distinctive low-gear-on-gravel voice, he says: “I believe it’s the same for most performers. You’re looking for something, some place, where you feel comfortable, where you’re able to express yourself; some place you feel safe. It was the answer to a lot of the conflicts I had as a child. It was a way of rebuilding the safety that I felt in my grandparents’ house when I was young.”

That house is at the centre of his spellbinding memoir, and of his life; he still dreams of it. “It was,” he writes, “the greatest and saddest sanctuary I’ve known.” His grandfather rebuilt radios – a magical pastime – and his grandmother treated young Bruce like a king. In recent years, when he returned to his paternal grandparents’ tiny house in Freehold, N.J., where he spent his early years sheltering from his unhappy father’s scorn, he found it had been torn down to make way for a car park for the nearby church. They had paved paradise, and put up a parking lot.

Equally crucial to his story is his turbulent relationship with his late father, Doug, a lonely drinker who suffered from an undiagnosed mental illness and who found little satisfaction in his only son, the long-haired, guitar-playing weirdo. It was a relationship that they mended, haltingly, later in life, when Springsteen had grown up enough to forgive. “My father and I were difficult together,” he says, “but not so difficult that toward the end of his life we weren’t able to be close and realize how much we loved each other.” 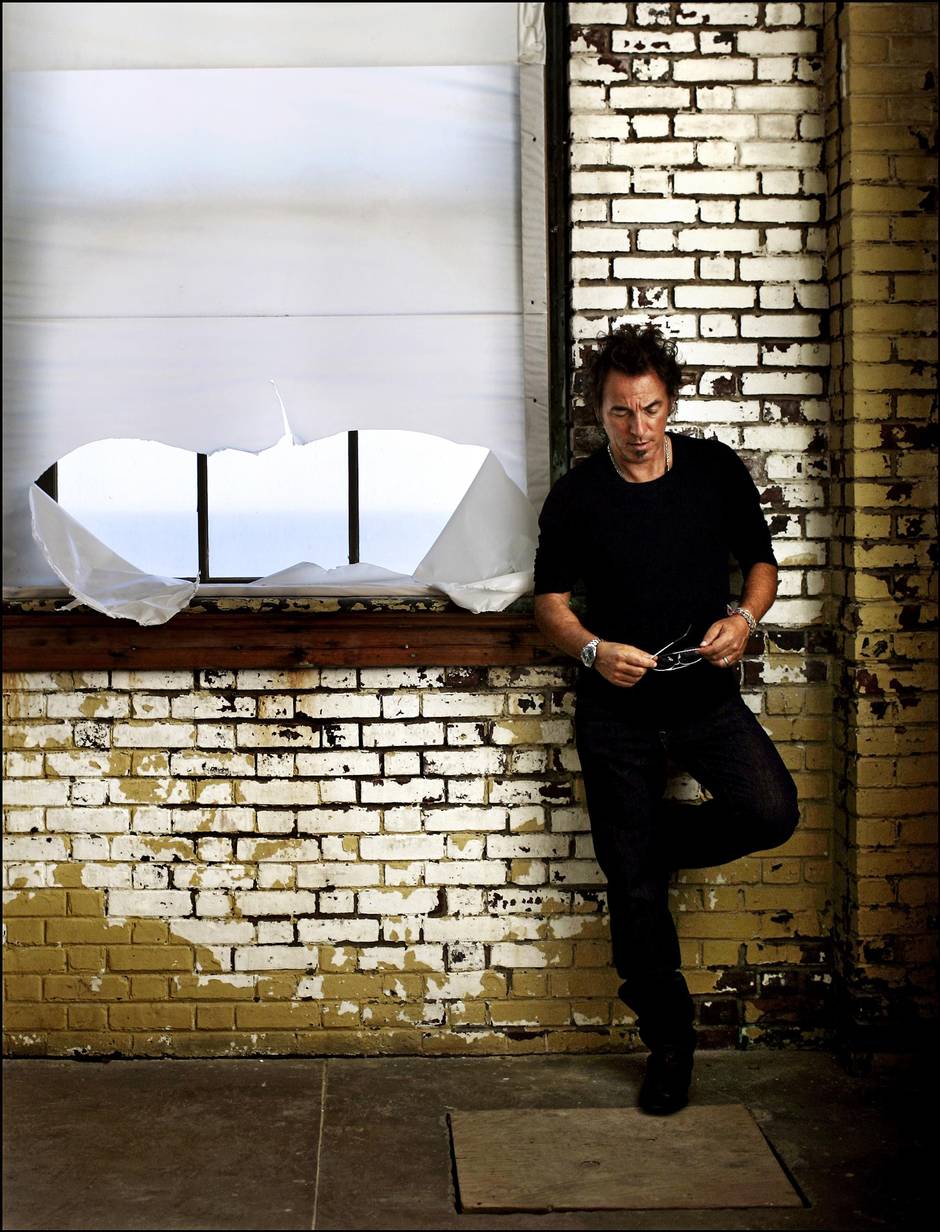 Springsteen writes about his turbulent relationship with his late father in Born to Run. While his father found little satisfaction in his only son, his mother has been a supportive presence. (Todd Heisler/The New York Times)

His mother, Adele, the daughter of Italian immigrants, was a powerful, loving and supportive presence all through his life (she’s still alive). She is the one who encouraged his musical exploration, he says. “If you build yourself a full life, you look back and you have the generosity to take a compassionate look at your parents’ life. If you’ve been damaged permanently, it’s much more difficult. … I have friends who are completely estranged from their parents or their families. There’s no real road to going back. If you’re fortunate enough to have that road, it’s good to make use of it.”

In his songs, he also imagines his way into the life of a hobo, a factory drudge, a state trooper, a Vietnam veteran – and the crazy thing is that he has been none of these things. He’s never had another job except for singing and playing guitar, which he took up after seeing Elvis and the Beatles on TV. He’s never been a busboy or a babysitter or a clock-puncher, and when his draft letter came in 1968, he and his freak buddies took the bus to Newark and were judged unfit for military service.

Yet, he is America’s great contemporary chronicler of the betrayed working class, from Darkness on the Edge of Town in 1978 to the anti-establishment fury of Wrecking Ball in 2012. I tell him that one of his songs, Downbound Train, has haunted me for years since I heard it on his 1984 album Born in the USA. This is how it begins:

I had something going mister in this world

I got laid off down at the lumberyard

Now I work down at the car wash

Where all it ever does is rain

“Huh,” he says when I tell him this. Clearly he doesn’t get asked much about Downbound Train. But its themes are familiar, and the narrator is an archetype found in many of Springsteen’s songs, a man who wonders why he’s on a downbound train while the fat cats in New York and Washington are riding their elevators to the penthouse. These are the men and women who live in small-town New Jersey and Ohio and Pennsylvania, the same towns a teenaged Springsteen toured with his band in a clapped-out car he didn’t even have a licence to drive.

He says: “What we see in the States at the moment are the results of 30 or 40 years of neglecting the effects of deindustrialization and globalization on a large part of the population. … The world changed and a lot of people didn’t have the ability or the circumstance or the preparation to change with it. That’s a very difficult thing. If someone told me tomorrow that I couldn’t play music any more, I don’t know what I’d do. I’d be at a complete loss. If your steel mill shuts down, if your factory shuts down, and the job you’ve done for 20 or 30 years goes away, you’re abandoned. You’re orphaned.” 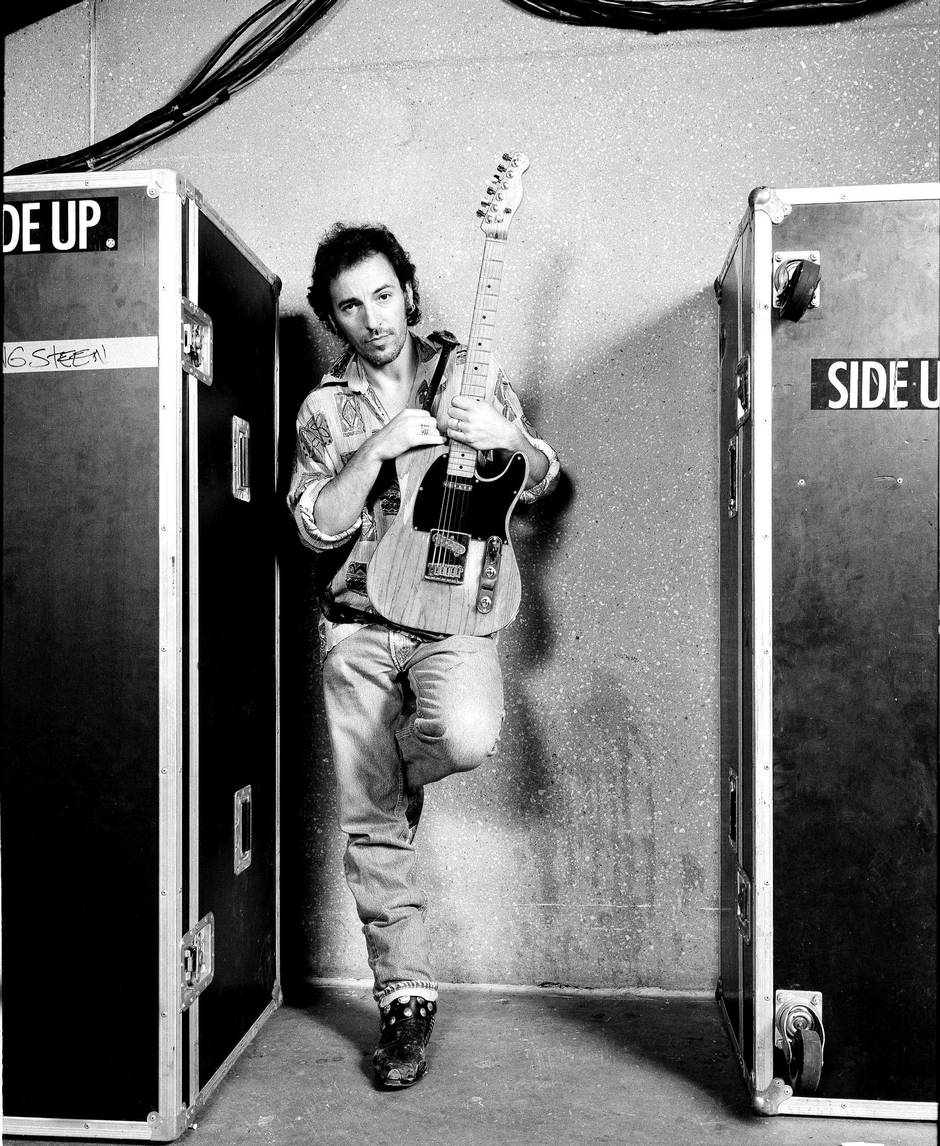 While he's not pleased with Donald Trump's impact on the political discourse of the United States, Springsteen takes heart in social-justice movements such as Black Lives Matter. (Keith Meyers/The New York Times)

An orphan might be susceptible to a demagogue with a grifter’s confidence and a powerful line in empty promises. Springsteen, as you might imagine, has many thoughts about Donald Trump, and not one of them is happy. “I hope Donald Trump goes down hard, and Hillary Clinton is elected president. I like her; I think she’d be a very good president.

“Donald Trump is simply a very dangerous man who has ruined the political discourse of the nation, and is a real danger to democracy. He’s taken his followers to a place that is beyond democracy when he talks about rigged elections. There’s a lot of very, very dangerous talk out there that subverts democratic processes.”

He’s still irate about the financial crash of 2008, and is worried about the state of American political life, but it’s not all bleak: Springsteen sees great hope in social-justice movements, such as Black Lives Matter. In 1999, he faced a disturbing moment when police publicly protested his song American Skin (41 Shots), about the shooting of Guinean immigrant Amadou Diallo by undercover officers in New York. Now, though, he takes heart from the protests that roil America’s streets, unsettling though they are in the short run.

“If you look at the civil-rights movement, it looked like all hell was breaking loose, and of course it was. At the same time, the gains that were made in that time have benefited Americans from the 1960s to now. Now we’re going through another period of racial tension to further the cause of justice. This often happens in an ugly and violent way, but it does push the nation to deal with its problems. Martin Luther King said that the arc of history is long, but it tends to bend toward justice.” 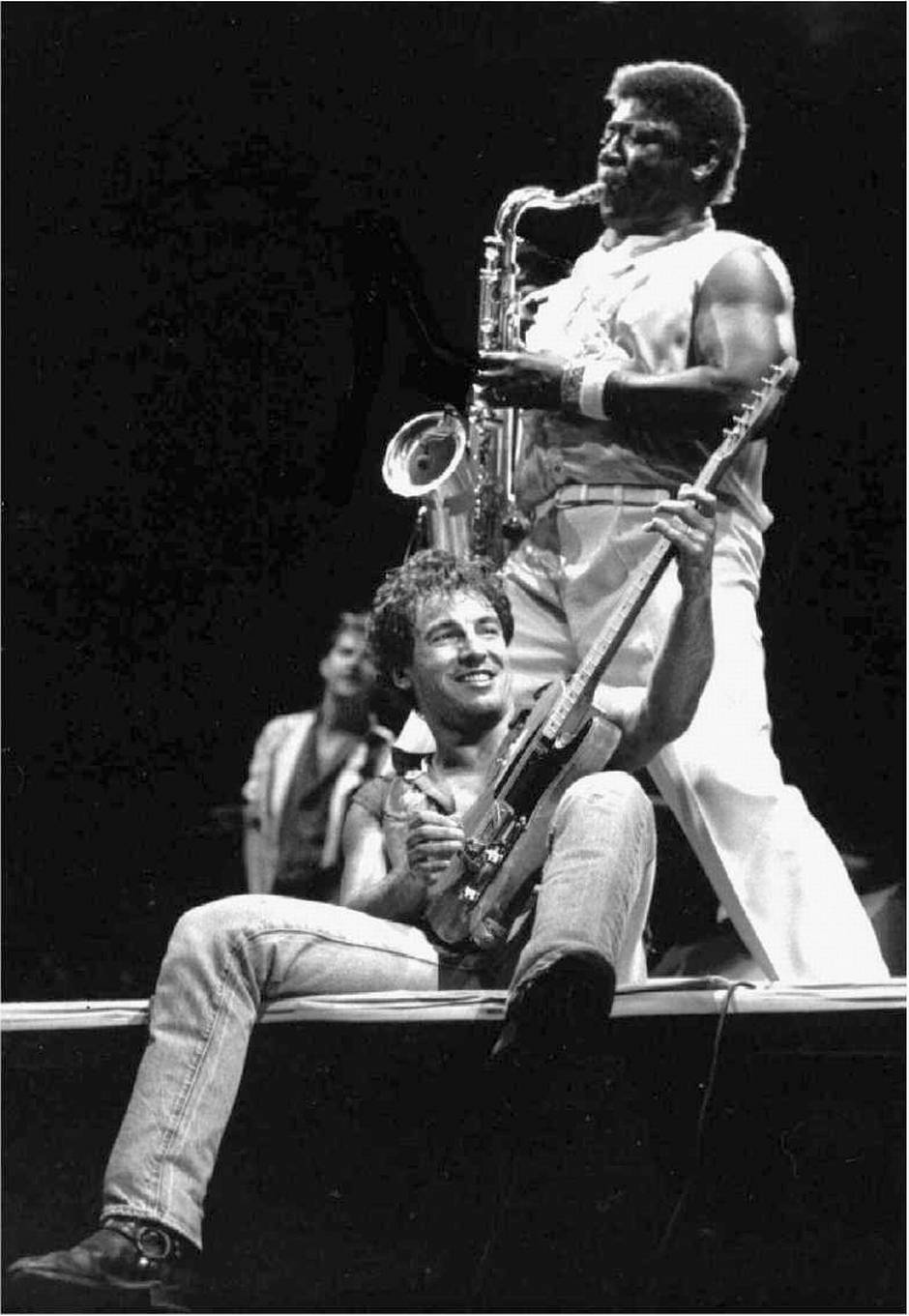 And his own personal arc? Now, at 67, it bends toward contentment, or something like it. The man who had his first drink at 22, who proclaims to be afraid of living near the edge, found his own edge in depression, and has learned to cope with it. To that end, he has a support network consisting of his wife (and E Street band singer) Patti Scialfa, and their three adult children. “Without her strength and calm,” he writes, “I don’t know what I would have done.”

There’s also that band of brothers he plays with, although the death of saxophonist Clarence Clemons left a ragged hole at its heart, and in his heart: “It created a hole in me that’s never going to be filled. And that’s life, once you get to a certain age. You’re going to end up with a life that has a lot of holes in it.”

That’s life, if you’re lucky enough to survive it, and find yourself not running, but moving at a reasonable pace, enjoying the world in all its cracked splendour.