The rehearsal space high atop Toronto's Elgin Theatre is magnificently cluttered. Costumes are hanging lazily on clothing racks; tables are full of musical scores, scattered in every direction; half-empty cups of yesterday's Tim Hortons coffee, black and oozy by now, dot the landscape. The scene looks exactly as you'd expect a creative working space to look. It's where Opera Atelier is preparing its latest offering, and maybe its most significant presentation, Mozart's early opera seria, Lucio Silla, the story of a Roman dictator, which opens at the Elgin this week.

Marshall Pynkoski and Jeannette Lajeunesse Zingg, the artistic duo at the heart of Opera Atelier, have to push aside yesterday's food and three or more scores to make room for us all to sit at one of the rehearsal tables. Speaking to the pair is always a treat because they are, in person, exactly as they are on stage. Pynkoski, brash, exuberant, articulate, energetic. Zingg, composed, elegant, thoughtful, focused. They make a great team on and off stage.

They're talking about Lucio Silla, perhaps the most significant production they've ever mounted. Because it's the show with which Pynkoski and Zingg cemented their international reputation. "It was way back in the summer of 2011," Zingg remembers, "when we first got the phone call. Marshall came out, said to me, 'Sit down; we've been asked to direct and choreograph in Salzburg!'"

The call had come from Marc Minkowski, an old colleague, who was now directing the prestigious activities at Mozartwoche, the week in January in the Austrian city of Salzburg devoted to all things Mozartian. Minkowski wanted the two to tackle the very obscure, hardly ever performed Lucio Silla, an opera the 16-year-old Mozart had written in 1772 for the pre-Lenten festival in Milan. (To give you an idea of its obscurity, its first British production was in 1967.)

After several transatlantic hops to meet with designers and other team members, Pynkoski and Zingg got down to the serious business of figuring out what to do with this tricky piece of musical theatre in the summer of 2012 while they were at the Glimmerglass Festival in upstate New York.

"We literally had a trailer that they kept to one side exclusively for us. Every single day, we went in there about 9 in the morning and we were there for hours every day. Because we had no experience with this piece. You know, usually we have a very good idea of what we want to do when we start a project – we've thought about all sorts of things, talked with people, made notes, we have lots of operas on the go. But Lucio Silla wasn't on the go – it wasn't even on the radar! We had to start from scratch," Pynkoski says.

But whatever Pynkoski and Zingg figured out in that trailer seems to have worked. Lucio Silla was a smash hit at the Mozartwoche in January, 2013. So much so that, for the first time in its history, the Salzburg Festival proper asked the pair to remount the production in the summer of 2013, to further acclaim. At the after-party of that show, the director of Milan's La Scala, arguably the world's most famous opera house, approached them and said, "I must have this production." Lucio Silla opened at La Scala in February, 2015. It was broadcast on international television, and will soon be released on DVD. Since then, the international offers have been coming in to the pair on a regular basis. And finally, Silla will be opening in Toronto later this week. After 30 years in the business, Pynkoski and Zingg were overnight successes.

Despite all the acclaim the team has received with their Lucio Silla, Pynkoski was frightened of it at first. "Opera seria, this very conventional form that Mozart used for Lucio Silla, is very strict and forbidding. It's always a struggle to try and get it into something coherent. Every time you approach it, or at least every time I approach it, I have to try not to panic. There are all those repeated da capo arias, which can go on forever, with little dramatic impact – for eight, 12 minutes.

"The initial response, even after all of these years, is to not trust it. You think, 'Oh my God, what are we going to do with this? How are we going to keep people interested?' The whole process Jeannette and I went through was getting to the point where we were able to say: We don't need to do anything to this – we don't need to apologize for the past. We need to try and understand it and let it be what it is. And if we're not willing to do that, we shouldn't be doing it, we should be doing something else."

Even though they've been working on Silla non-stop basically for three years, more intensely than for any other show they've ever done, Pynkoski is especially excited about its Toronto production, with its new design by Gerard Gauci, Opera Atelier's resident designer. "Gerard is a painter," Pynkoski notes, "The Salzburg production had a tremendous grandeur about it but was very muted. This one explodes with colour."

But there's more. "The show is more dramatic now than in its previous incarnations," Pynkoski says.

Partly that has to do with Mozart's score, an undeservedly neglected gem, full of modern touches, with intimations of everything from Don Giovanni to The Magic Flute. But, amazingly, after 30 years, Pynkoski thinks he and Zingg are just hitting their creative stride. "We've been stripping away, stripping away and simplifying over the years, trying to get more and more to the core of what we're doing. It's like you build up pressure at a certain level and then there's this breakthrough and you suddenly find that you're doing something markedly different than you were before. We are just beginning to feel that we really have our voice."

Starting Thursday evening, Toronto will be able to see what the world has hailed, and the results of that emerging artistic vision. After which, anything might be possible for this pair.

Lucio Silla runs April 7 to 16 at the Elgin Theatre in Toronto (operaatelier.com).

‘A night of firsts’ for Toronto opera legends in Milan
March 2, 2015 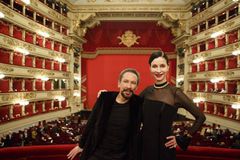 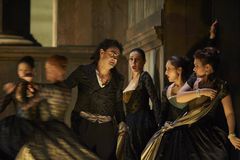 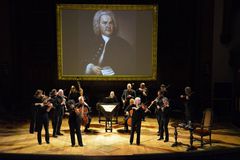