Patti Smith knows the price of thi ngs. In her 2010 memoir Just Kids, as much a reckoning as an alembic of New York myth, she recounts purchases with the exactness of the very poor or very rich: a $5.95 fish sandwich in a restaurant at the Empire State Building; $32 found along with a locket at a bus station (she left the locket); three months overdue in rent, totalling $180. Even her experiences seemed to accrue, carefully tallied, determining how much she would have to give back. She was a shaman, a boh ème, Jim Carroll's "Crow," but a free spirit? No, Patti Smith is rarer, smarter and more generous than that. Nothing that is given is free.

"People called me the godmother of punk," says Smith, "but I never name myself anything." She is speaking by phone about Banga, her latest album and possibly her last (every album is possibly the last for any artist, but this, with its hippie-peripatetic lyricism and hodgepodge sound, feels both like she's travelling the world and resting at the end of it). "I'm a worker. I do the work to communicate, and I want people to embrace it, and when they do I'm happy."

She sounds happy now. Belatedly, she has been given her due, and is giving more back. Banga is a heavily publicized and reverently accepted record; it's accompanied by a book of the same title and a series of black-and-white film clips in which Smith explains each track - both by Steven Sebring, who also directed the 2009 Patti Smith documentary Dream of Life.

With Just Kids, a New York Times bestseller and National Book Award winner, her public embrace got wide; plus, she recently re-published a small book of memories and poems, Woolgathering, and is working on a crime novel.

In 2010, she appeared in Jean-Luc Godard's Film Socialisme. In 2011, she who was the soul-twin of Robert Mapplethorpe had the first U.S. museum show of her own photography, at the Wadsworth Museum in Hartford, Conn.

She has spent two years effectively touring New York, presiding with equal dignity over parties and panel discussions. In February 2010, I saw her play a private concert for a fashion label, and two months ago, I watched her discuss authorial practice for an hour at a charity bookstore. I would have snuck in to watch her play a 2011 concert for tenants of the Chelsea Hotel, sponsored by the same developers who were evicting them, but she cancelled it - presumably, she calculated the financial loss against the loss of her fans' faith in her.

What we often call purity is a zero-sum balance between self-interest and the interests of others. Patti Smith is pure. She has always been called, has always felt, pure ("I never feel less pure if something's popular, because I made it for the people" is a typical statement). And she's particularly unusual now, in this reign of apolitical art stars and "I'm not a role model" pop queens, for incarnating a contradiction in terms: the responsible artist.

"As an artist, I used to think that my responsibility was to do good work," she says. "But I had to learn from the '70s on that being a public figure presents another aspect of responsibility. You gain the allegiance and even love of your fans, and you have to think about how you deal with fame, how you deal with substances. Everything one does has its effect. It's not that I have compromised or anything, but it's always been important to me to take good care of myself and be a good example." She sounds altogether earnest, and maybe she knows it, too, because she allows herself a small joke: "I'm not much a role model in terms of hair care, though."

Although Smith, a mother of two, has treated womanhood as a responsibility - and, sometimes, a burden - she has never seemed as much concerned with women's rights as human ones. Early she developed that tomboy pose, that one-of-the-guys messy bravado. Unfortunately, because rock 'n' roll was/is so masculinist, that got her further than tits-out feminism might have. "Patti has done more here for woman as aggressor than all the liberation tracts published, and has pushed to the front of the media eye that it is just as much a process (ordeal) learning to 'become' a 'woman' as it is for men wrestling with all this ballyhooed 'manhood' business," wrote Lester Bangs in 1976.

Smith's ism was and is punk rock. "To me, punk rock is the freedom to create, freedom to be successful, freedom to not be successful, freedom to be who you are. It's freedom." If she did not call herself a feminist, does it matter? No one decides who is and isn't feminist. And anyway, what really matters is whether or not someone/something is helpful or harmful to women. I dare you to argue Patti Smith has not helped us. She is helpful to the core. So helpful in fact that the first thing she says to me on the phone - and no celebrity interview subject has ever said this - is "How can I help?" And she has never apologized for being a woman, never accepted less than respect. That's how she helped. Bangs called her a hero to a generation of girls, but now she is a hero to three generations of girls. Where she copied Rimbaud and Bob Dylan, the nouveau poètes maudits copy her.

On Banga, there are elegiac tracks written for Amy Winehouse and for Maria Schneider, both of whom died last year. Winehouse, says Smith, was "one of the most interesting singers" she'd ever heard, although they never met. Schneider (of Last Tango in Paris fame, then scandal) often came out to shows in the mid-'70s wearing a white shirt and a skinny black tie. Though Schneider lived decades longer than Winehouse, both had complications arising from Freudian death instincts, making them all too familiar to Smith, who watched her rock compadres die of drink and drugs, her best friend Mapplethorpe of AIDS and finally her husband, Fred Smith, of a heart attack.

"I've never been attracted to self-destruction," she says. It's the only thing that rings false, because of course she - in her friendship with Mapplethorpe, especially - surrounded herself with it. What she means is that she didn't partake. "The only thing I abuse is coffee." She has said before that she did not take drugs because, with a mother who had been very sick, she felt an extra responsibility to be healthy. Now she says drugs are just a lie. "You can have a special experience on drugs, but any artist, any person, needs clarity and health. The continuing use of substances will never enhance your work."

Patti Smith is still counting the losses to those substances, those irresponsibilities. "I've suffered so much death in my life," she says, "that I don't even feel nostalgic." I ask if there is a time she would return to if she could. She thinks. "I could say it was when my husband was alive, or Robert was alive, or when my kids were young. But the only thing I am really nostalgic for is childhood. I would want to be 10 years old in the forest with my dog again. It was a pure time." 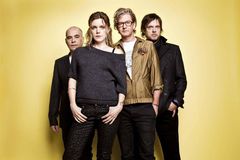