When The Globe and Mail spoke with Paul Anka in October, 2009, the topic of conversation was the song This Is It, which was released by Sony as a Michael Jackson single shortly after the singer's death. The song was an undisguised version of I Never Heard, co-written by Jackson and Anka in 1983 at Anka's studio in Carmel, Calif.

At some point, the master tape of the original song (which belonged to Anka) had been taken by a representative of Jackson's, and was later adapted, recorded, retitled and ultimately released posthumously. Upon hearing This Is it, the Ottawa-born Anka recognized it as something he owned. After he protested, Sony acknowledged Anka's co-authorship and granted him 50 per cent of the publishing rights.

When record executive and Jackson estate co-executor John McClain phoned Anka to apologize over the misunderstanding, he mentioned that he'd found another "great song" of Jackson's in the vault. "Let me play it for you," he told Anka.

Anka listened and agreed that the song was strong. He then dropped a little bomb. "Excuse me, sir, but that's mine also," he told McClain. The song was Love Never Felt So Good, a hit single from the latest posthumous Jackson album, Xscape, released last week. It is indeed an Anka co-write (from the same sessions that produced This Is It), and now the Having My Baby singer is the proud parent of another charting collaboration with Jackson.

"I've had a long journey with that song," Anka told The Globe last week. "It's certainly a commentary on good material. It's from a period where Michael was really in his zone."

Indeed he was. The same year he worked with Anka, Jackson released Thriller, a consequential album to say the least. After Thriller broke big, however, Jackson was no longer interested in appearing as a duet partner on Anka's Walk a Fine Line album, as was planned.

In addition to Jackson, Anka worked with others on the Walk a Fine Line project, including David Foster, Michael McDonald and Kenny Loggins. Unlike those professional songsmiths, Jackson wasn't a technician when it came to composing. "He wasn't a great musician in that sense," said Anka, whose credits include My Way, She's a Lady and the theme for The Tonight Show Starring Johnny Carson. "His genius was that he had a very strong and passionate love for what he was doing and knowing himself. You could put a drum and a piano and maybe a bass with all those sounds he makes and his whole wherewithal with himself, and what he was capable of doing was remarkable."

There are three versions of Love Never Felt So Good, including the contemporary-sounding hit duet with Justin Timberlake and a disco-tinged solo rendering that wouldn't sound out of place on Jackson's Off the Wall from 1979. A demo version, with Anka on piano accompanying Jackson's vocals, is included on the deluxe edition of Xscape.

"He was very unusual in the way he approached a song," Anka said of the King of Pop. "I'd have to sell him on some chords, and convince him that it could be different or better. Then, once he got in the loop with me, he contributed, but not in an aggressive way. He was a very mild-mannered and shy human being."

Jackson and Anka worked for four weeks together in 1983, but nothing from the collaboration ended up on Anka's Walk a Fine Line. It was to be a comeback album, anchored by a duet with Jackson.

After Jackson pulled out of the project and took the tapes with him, Anka held a grudge for years.

But now? "I think he's made me a little happier," Anka says with a laugh, thinking of the cash windfall from the collaboration. Love Never Felt So Good is featured in a major ad campaign for Jeep, and Anka says there are "many, many more songs" from his sessions with Jackson. "They'll all come out," he says, "as they need them."

And make no mistake, they – meaning Sony and the Jackson estate – will indeed have need. Which is just fine for Anka. Don't stop till you get enough, you can almost hear him say. 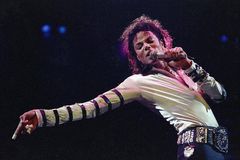 From the archives – Maya Angelou's message: God put a rainbow in the clouds to give us hope and each of us has a rainbow within.
May 28, 2014
Follow Brad Wheeler on Twitter @BWheelerglobe
Report an error Editorial code of conduct
Due to technical reasons, we have temporarily removed commenting from our articles. We hope to have this fixed soon. Thank you for your patience. If you are looking to give feedback on our new site, please send it along to feedback@globeandmail.com. If you want to write a letter to the editor, please forward to letters@globeandmail.com.
Comments