Of the 10 shortlisted albums announced Tuesday for the this year's Polaris Music Prize, perhaps the most intriguing nominated disc is Nation II Nation. The record is a collection of urban Aboriginal dance music (dubbed "electric pow-wow") from the Ottawa-based DJ-trio A Tribe Called Red. The growing popularity of the group is a welcome departure from a genre quickly becoming homogenized, but it has instigated a troubling trend of Native-wear accessorizing among fans that prompted the threesome to take to Twitter in an effort to discourage a deplorable sort of cultural appropriation. "Non-Natives that come to our shows, we need to talk," read one of their tweets a month ago, "please stop wearing headdresses and war paint – it's insulting."

The issue is a hot-button, what with the release of Gore Verbinski's Lone Ranger, a feature film controversial for Johnny Depp's stereotypical depiction of Tonto, the sidekick Native American. "There come a time, Kemosabe," the befeathered actor declares in the movie, "when good man must wear mask." But, according to Bear Witness, a member of a Tribe Called Red, there's a time when people mustn't go disguised or costumed.

"You're not honouring me by wearing war paint and headdresses. You're not representing my nation at all," says the Six Nations member. "We've come through a culture that has gone through 500 years of genocide and oppression, so dressing up in feathers and headdresses isn't something we find respectful."

The trio is a sought after act this summer, attracting bookers from Brooklyn hot spots as well as folk festivals and major pop and rock events (Ottawa Blues, Osheaga and Squamish Valley). Originally, the wearing of feathers and war paint by fans was something mostly seen at electronic dance music events, but the practice has spread into non-EDM festivals as well, a development the band sees as "difficult to deal with," but also as an opportunity to educate. "We're able to show our audiences something real," says Bear Witness. "It's Aboriginal culture as we portray it ourselves, through our eyes and through our own actions, rather than through this pan-Indian idea where a headdress represents Aboriginal culture."

There's a difference between appropriation and appreciation, a line that when it comes to Aboriginal culture is more casually crossed than the "black face" tradition of old. Last year, Victoria's Secret apologized for parading a model in headdress, turquoise jewellery and little else at a New York fashion show. As well, the California-based pop band No Doubt pulled a cowboys-and-Indians-themed video for its single Looking Hot after a deluge of complaints.

How much has changed since then? While major sport franchises encourage the hiring of minority managers, the existence of teams names Redskins, Indians, Braves and Chiefs endure. "It's mind-blowing that this whole conversation that we've been having the past few decades about the portrayal of our people hasn't gone anywhere," says Bear Witness, who wears a Braves jersey as a way of taking back his culture. "It hasn't changed."

The short list of the 10 albums vying for the 2013 Polaris Music Prize, announced Tuesday, represents a departure from the lists of the previous two years, which included big-name front-runners Arcade Fire (winners in 2011 for The Suburbs) and Feist (winner in 2012, for Metals). This year's race for the award for top Canadian album is wide open, with contenders that include Godspeed You! Black Emperor (Allelujah! Don't Bend! Ascend!), Zaki Ibrahim (Every Opposite), Metric (Synthetica), Metz (METZ), Purity Ring (Shrines), Colin Stetson (New History Warfare Vol. 3: To See More Light), Tegan and Sara (Heartthrob), A Tribe Called Red (Nation II Nation), Whitehorse (The Fate of the World Depends on This Kiss) and Young Galaxy (Ultramarine). The award will be announced at a gala in Toronto on Sept.23. 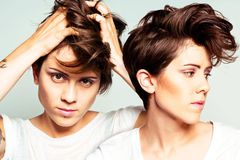 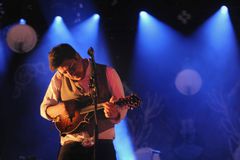