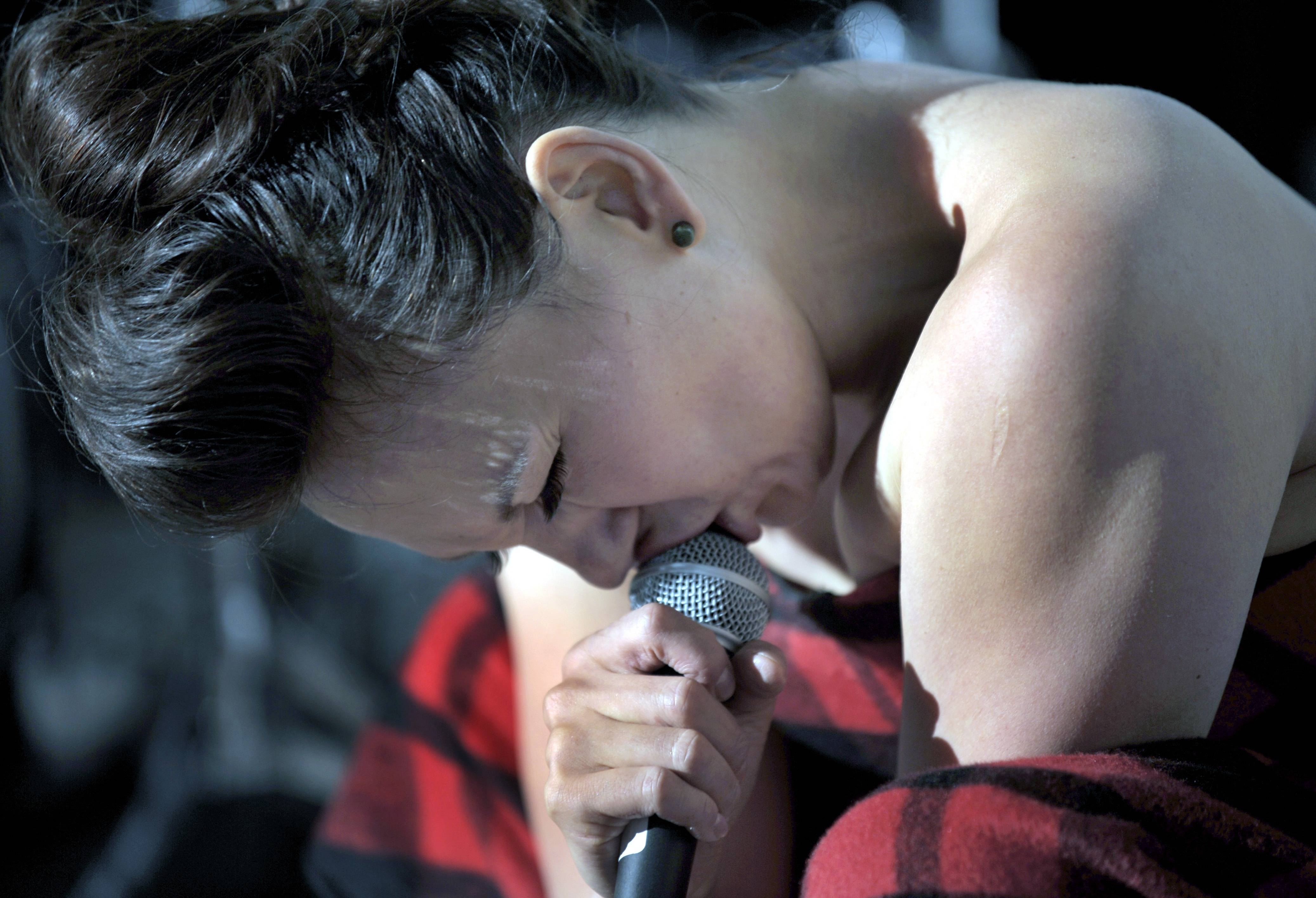 All photos by J.P. Moczulski for The Globe and Mail

Microphone in hand, her blanket dress bunching around her waist, Tanya Tagaq crouches down as if to pull some deeper, more elemental sound from the earth hidden below the floor. She is singing, growling and panting her way through a set loosely related to her new album, Animism.

She calls herself a sound sculptor, but what I experience when I hear Tagaq perform is always more like a weather system, swirling unpredictably through her body, the room and myself. You can’t stay at a distance when she’s singing: You either let the elements do what they will, or head for shelter elsewhere.

Ever since she appeared in a show-stopping segment of Bjork’s Medulla shows 10 years ago, Tagaq has defined the elemental edge of popular music. Her fusion of song, Inuit throat singing, electronics and free improvisation feels beyond time and place, yet it’s also highly personal. Whatever she’s channelling, it’s running through a particular sensibility: that of an Inuk mother of two from Nunavut who has lived on the land and studied at the Nova Scotia College of Art and Design. Nobody, anywhere, sounds like she does.

She has found audiences around the world in clubs, concert halls and folk festivals, where her sonic experiments play as an especially deep take on roots music. She has created pieces with the post-classical Kronos Quartet and avant-pop singer Mike Patton, as well as a live soundtrack for Nanook of the North, the 1922 silent film she’ll be presenting at Toronto’s Luminato festival on June 10.

The lowest common denominator in humanity is the breath. Being able to communicate with every single person at a concert by the mere fact that we’re all breathing is so celebratory to me. I can feel all the energy from all the people in the audience. It comes into my stomach and then out my mouth. I’m feeding off them to make what I’m making.
Tanya Tagaq

Many people who have been moved by Tagaq’s cathartic shows and two previous CDs may not realize that her mostly wordless music also has a strong political aspect. She hopes to make that a bit more obvious with Animism, which is both a hymn to the spirit in all living things and a manifestation of the indigenous activism that gave rise to the Idle No More movement.

“This album is focused a lot on how I feel about colonialism, government and society,” she says, over a meal before a disc-launch event in Toronto.

“I’ve been singing about that my whole life, without putting words to it.” When she does put words to it in conversation, her rage is evident. But she’s not interested in writing protest songs. Tagaq’s intensely physical music is more like a demonstration in sound of how the natural order feels when you’re not separated from it. That’s political, because when you accept separation, she says, you make it easier for people to treat the Earth as a mere resource to plunder.

“The more you remove yourself from nature, the more you think that the Earth belongs to you, and not that you belong to the Earth,” she says. “I wanted to have a voice for what the Earth is trying to say to us. We’re doing terrible, parasitic things to it.”

You can hear that sentiment in her song Fracking, in which her moans and guttural cries sound as if she’s vocalizing the Earth’s distress. All the Earth’s activities flow into the breath, which is the root of everything she does. At the most basic level, her art is always about bringing to consciousness this natural wave-like process that we participate in every minute.

“The lowest common denominator in humanity is the breath,” she says. “Being able to communicate with every single person at a concert by the mere fact that we’re all breathing is so celebratory to me. I can feel all the energy from all the people in the audience. It comes into my stomach and then out my mouth. I’m feeding off them to make what I’m making.” 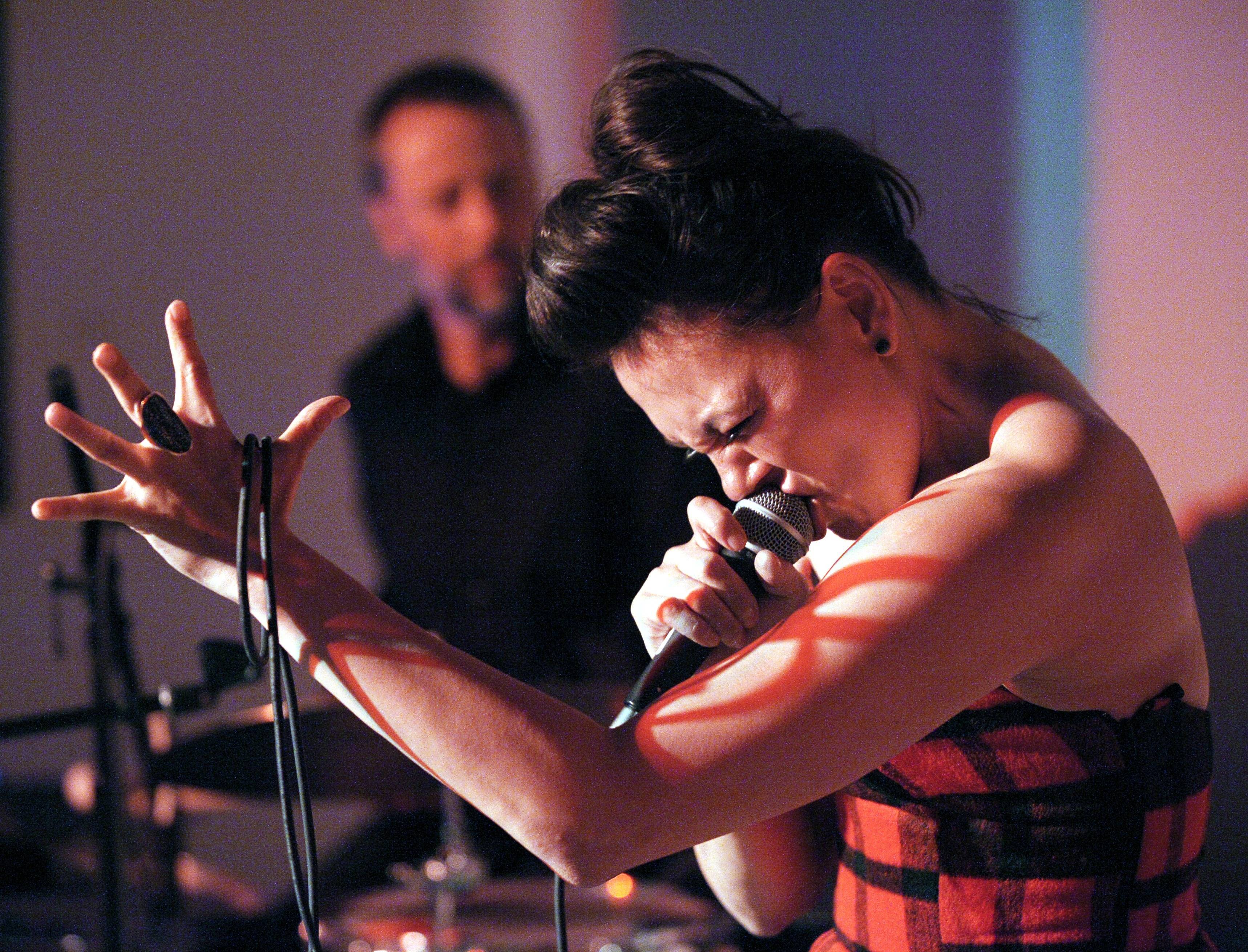 That’s a very positive, communal kind of energy, and it’s why Tagaq’s music looks like such a lot of fun to make – strong, body-shaking fun, like having sex or laughing the deep belly laughs that she lets out a few times during our conversation. The music on Animism feels remote from the narrow focus of protest songs not just because there are no slogans, but because it’s so vigorously engaged with life. “It’s about all the beautiful things that exist,” she says, “like looking at your kid in the sun, like getting back to nature, not in a ridiculous whimsical way but by making concerted efforts on a daily basis.” 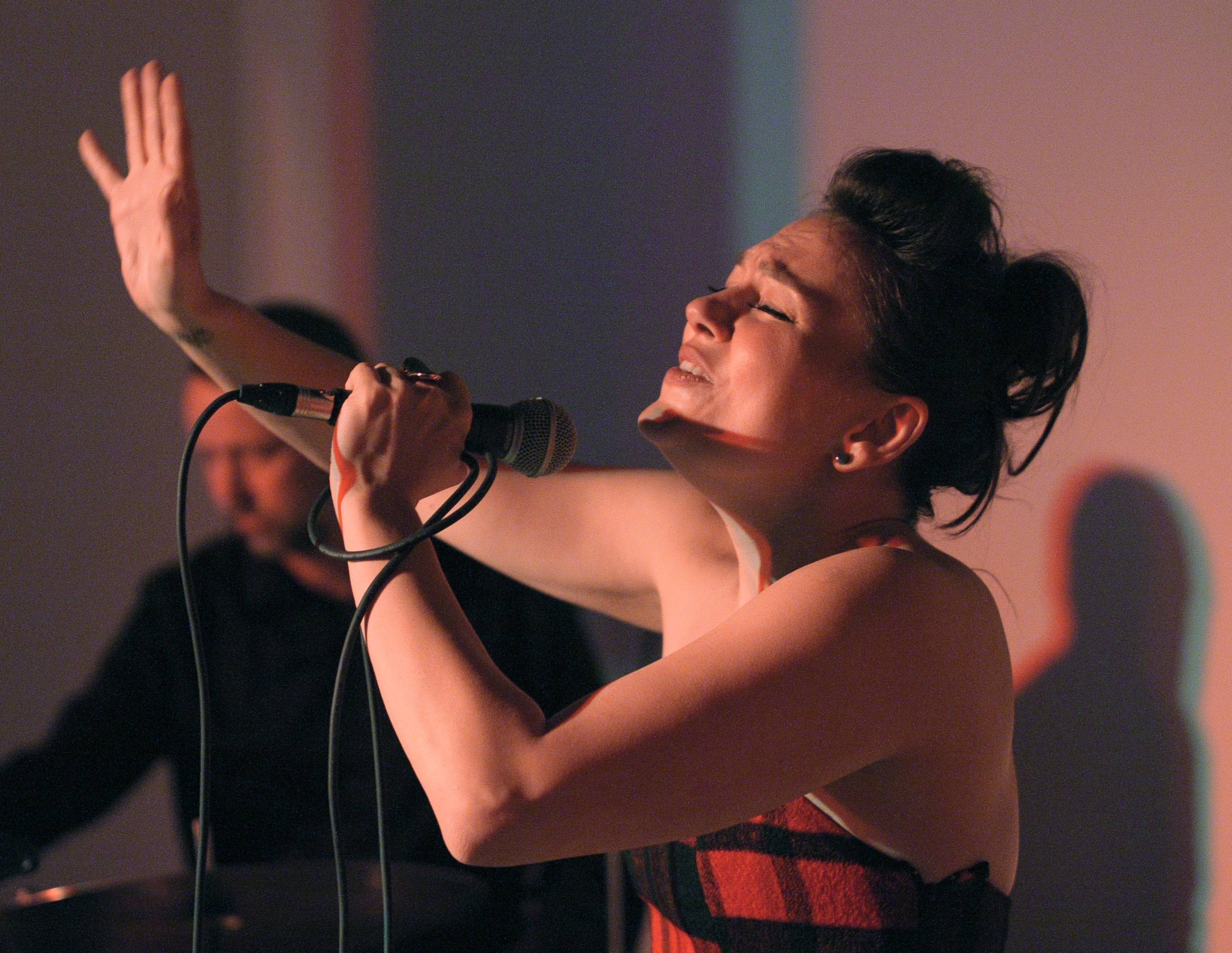 Tagaq’s mother’s family was among the Inuit who were forcibly relocated by the federal government in the 1950s from their home territory of Pond Inlet to the bleak isolation of Resolute Bay (the government issued a formal apology to the families in 2010). Born in 1977, Tagaq grew up in Cambridge Bay and experienced the family- and land-focused hunting culture of her people; the last time I interviewed her, her aunt had just shot a polar bear with a bow and arrow. 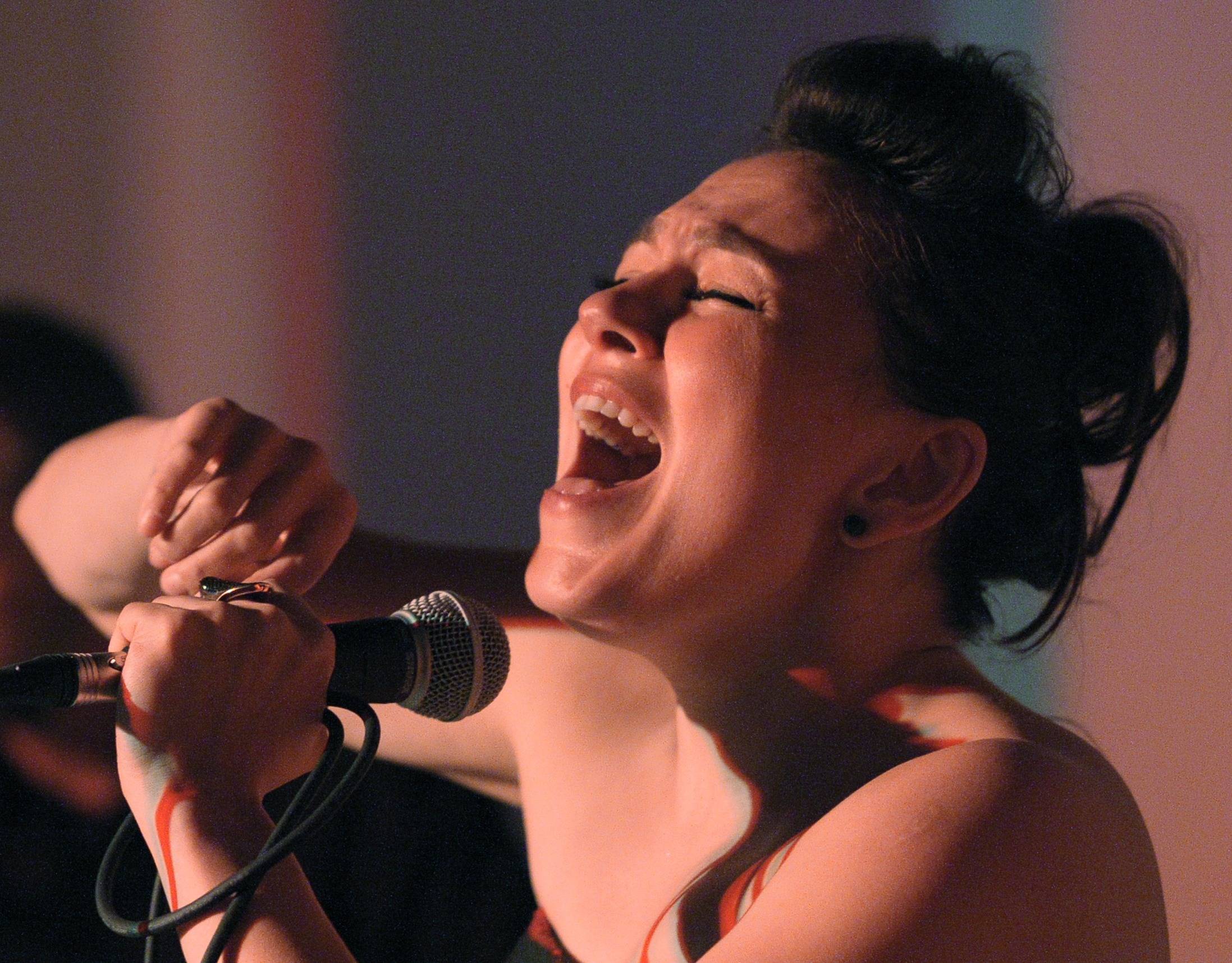 She was sent to a residential school, where her experience was mostly positive, before she headed to art school in Halifax. It was there, not in the North, that she first encountered Inuit throat singing, on tapes her mother had sent from home. She taught herself, adapting the techniques of the traditional singing game – in which two women stand face to face and sing and grunt rhythmically till one of them laughs – into a visceral kind of vocal performance.

Sinaa, her 2005 debut album, “was really like a sonic diary,” she says, in which she put down all the sounds she had discovered, with percussion and programming and a cameo appearance by Bjork. “The second album [Auk/Blood, from 2008] was absolutely developed, but I wasn’t able to go to the conceptual depth I’ve found with the band I’m working with now.”

Her bandmates are violinist Jesse Zubot and percussionist Jean Martin, veterans of the improvised-music scenes in Vancouver and Toronto respectively, both of them skilled in musical crafts of which Tagaq has a mainly instinctual understanding. Their challenge in Animism, they say, was to frame what she does in ways that make it more approachable for a mainstream audience, without diminishing its wild, exploratory energy.

“It was all made from improvised moments, edited with a little overdubbing to make it seem more like a pop album,” says Zubot. “It’s a very primal thing Tanya does, and it’s never going to become that confined. What she does is about the moment, and about channelling a place. Most people may not understand where that place is, but they feel it.”

The Animism concerts, he says, will likely have only a few numbers that sound more or less like what’s on the record, with the rest improvised from elements drawn from the album. A few years of performing together, says Martin, have taught him the virtue of keeping things simple, to create a flexible atmosphere for Tagaq’s spontaneous outpourings.

“Someone’s always leading, but the leader can change at any moment,” says Tagaq. “In that way it’s like traditional throat singing. To this day, we have yet to discuss a gig before we do it, and when it’s over, it’s like I’m just hanging out with my buddies because I want to.” 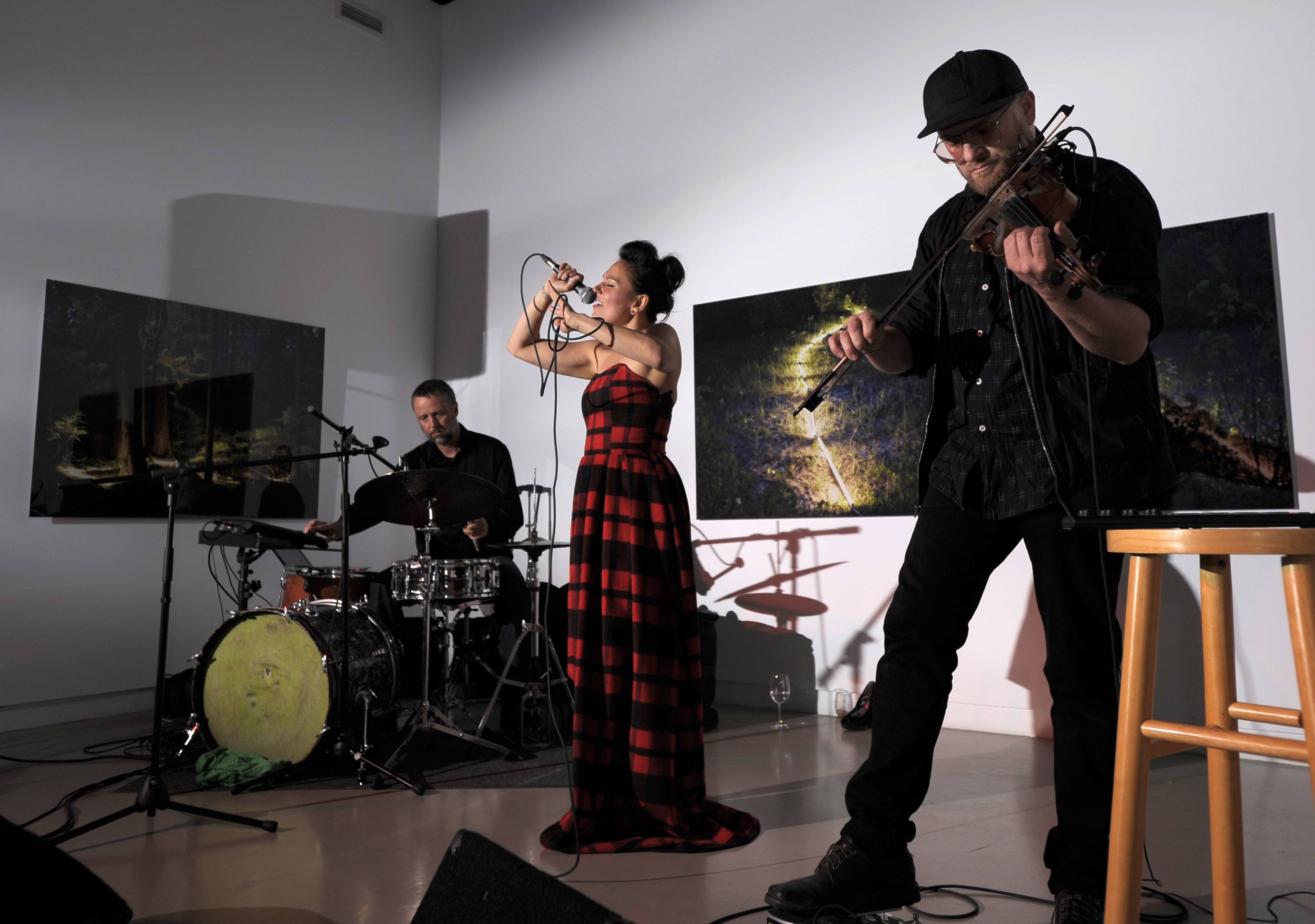 She lives in Brandon now and tours frequently, and during a recent stay in the North, “I ate a piece of raw seal liver that was still warm. I hadn’t done that since I was a kid, and I thought I’d be kind of grossed-out, but it awoke something in my body that was pure and good and perfect. It was like taking a peach off the tree perfectly ripe and warm from the sun, compared to eating a wooden peach during the winter.”

That remark recalls the final shot from the video for Tagaq’s Tungijuq (What We Eat), a fantastical celebration of Inuit hunting culture, in which Tagaq changes from wolf to seal to hunter. It was a collaboration with Zacharias Kunuk, acclaimed director of the 2001 feature Atanarjuat: The Fast Runner, whose recent documentary work and activism has focused mainly on the stresses of development on Inuit ways, land and heritage.

A few weeks ago, while Tagaq was visiting an elders’ camp, a young Inuk hunter came in with a freshly killed adult seal. It was at the time when many Inuit were posting “sealfies” on social media in defence of the subsistence seal hunt, so Tagaq lay her baby daughter near the animal and took a photo. When she posted it, some anti-hunt activists attacked her as an unfit mother.

“I would never disrespect my child,” she says. “I just thought it was beautiful to have the two of them together, the circle of how things get sustained. But a lot of people assumed it was a baby seal, and someone Photoshopped my baby being skinned.”

Her feeling about that kind of aggressive cultural misunderstanding simmers and roils throughout Animism, and also in what she does with Nanook of the North. She has been performing with Robert Flaherty’s silent-film portrayal of Inuit life intermittently across Canada ever since the Toronto International Film Festival commissioned her to create a score for Nanook, with help from composer Derek Charke, in 2012.

“It’s like a soup that has simmered a year,” she says. “There are parts of the film that are making fun of Inuit people, and sometimes people laugh, and I’m like” – she makes a ferocious growling face – “and they’re like, ‘Oh!’” But the film also gives a unique glimpse of Inuit from nearly a century ago practising their traditional ways, without today’s myriad Northern social ills.

“I get to have my Inuk pride, on so many levels, and I also get to fight against the stereotypes,” she says. That’s her life, and her music: a big enveloping storm, filled with pride and anger, joy and sorrow, and a fierce refusal to accept that we arose on this planet only to destroy it. 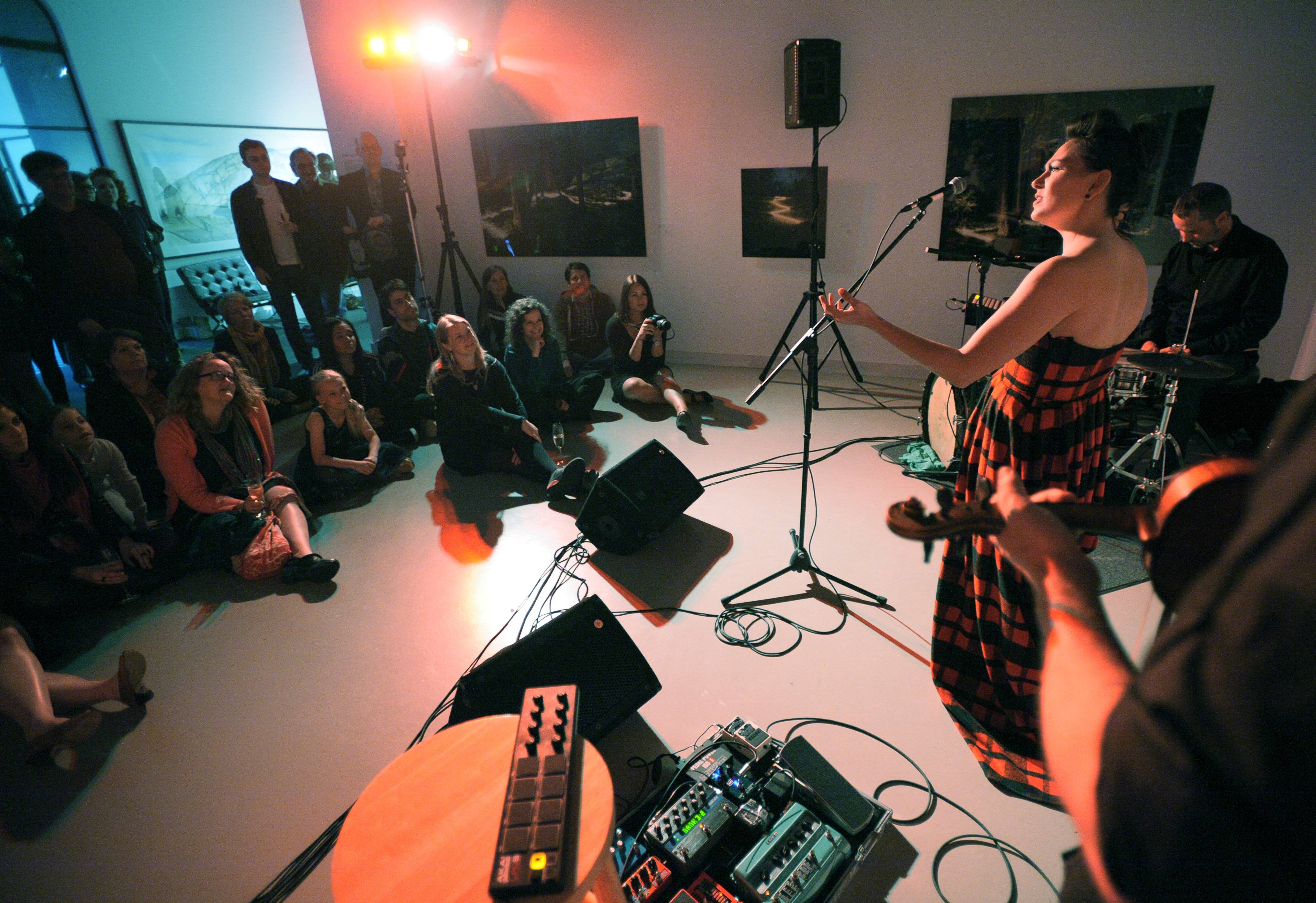 Tanya Tagaq performs Nanook of the North at Toronto’s David Pecaut Square on June 10 at 9:30 p.m., and in concert at the Banff Centre on July 20.