In his 2006 poetry collection Book of Longing, Leonard Cohen confesses that his carefully curated persona as a lonesome, lovesick Lothario, a patron saint of sadness and selfishness, was little more than a lie. "My reputation as a ladies' man," he writes, in an oft-quoted passage, "was a joke / that caused me to laugh bitterly / through the ten thousand nights / I spent alone."

In a year that has inured us to death and dying, where we've watched cultural icons drop like flies and gawked in horror as the fool's hope of a better world withered on the vine, Leonard Cohen's passing, at 82, feels like a particularly pointed affront. It's not just that Cohen, who released his final album, You Want It Darker, just a few weeks ago, was cresting through a new period of renewed artistic productivity. It's that, after decades of music and poetry and his two novels and his rightful ascent to the top of the pantheon of artistry (Canadian or otherwise), Cohen still felt relevant and vital.

Who better to keep us laughing bitterly through the lonely night? There were so few like him. And now there's one less.

Of all of Cohen's personas, the various positions in which he knowingly arranged himself for our consumption – upper-class poet, lecherous lounge lizard, gypsy-jazz balladeer, zen monk, acclaimed author and literary icon, guy who wrote a song that would be covered on the Shrek soundtrack, folkie dropout scoring some oral sex on an unmade bed – it's that lie of ladies' man that's likely to endure.

From the archives: Leonard Cohen: Life of a ladies' man

From the archives: Years of self-imposed isolation led to renaissance for Cohen

Yes, Cohen sang beautifully, and hauntingly, in his cigarette-smoky bass register, about love, loss, and all manner of heartache. Yet it wasn't just some clever put-on, as he'd have you believe. Cohen was well-known as a womanizer, carrying on affairs with fellow Canadian icon Joni Mitchell, lusting after German model and singer Nico (the subject, I think, of his jaunty number "Memories," about a shy young boy pinning an Iron Cross to his lapel and asking "the tallest and the blondest girl" to dance), American actress Rebecca De Mornay, and, most famously, Marianne Ihlen, immortalized in Cohen's So Long, Marianne.

Cohen and Ihlen became lovers after meeting on the Greek island of Hydra in the 1960s. She served as his muse, inspiring several songs on Cohen's earliest albums, 1967's Songs of Leonard Cohen and 1969's Songs From a Room. (Ihlen appears on the back cover of Songs From a Room, hunched over Cohen's typewriter, as if she were writing the songs for him.)

Yet Cohen seemed unable to return such grand favours, artistic, romantic, or otherwise. He never mastered affairs of the heart, or never bothered to try. As he told biographer Sylvie Simmons in her 2012 book I'm Your Man: The Life of Leonard Cohen, "I had wonderful love but I did not give back wonderful love, I was unable to reply to their love. Because I was obsessed with some fictional sense of separation, I couldn't touch the thing that was offered to me, and it was offered to me everywhere."

The Australian singer/songwriter Nick Cave, who croons and coolly grieves as if he were one of Cohen's bawling bastard offspring, offers a telling verse in his song From Her to Eternity: "This desire to possess her is a wound / and its naggin' at me like a shrew / but I know that to possess her / is, therefore, not to desire her."

It gets at the chilliness of Cohen's (and, of course, Cave's) songwriterly preoccupations, which had the tendency to twist male chauvinism into a virtue. As Simmons writes of Cohen, "romantic relationships tended to get in the way of the isolation and space, the distance and longing, that his writing required." Love is a thing to be longed for. Happiness is a shimmering phantasm gleaming on some ever-receding horizon. Desire itself is the motor of creativity.

One wonders how perpetual and self-fulfilling such prophecies are, and the extent to which Cohen exalted and intellectualized loneliness and self-sufficiency at the expense of those who loved him. Perhaps that's part of the benefit of being an artist: being able to accept and relish the love and admiration of fans and well-wishers, while only having to pay it back it on your own terms. Cohen was an artist forever beholden to a kind of nameless nostalgia, well-practiced in the timeless Jewish arts of mourning and remembrance. He always seemed born in the wrong time, or out of time. Even in the '60s, he sang like an old soul.

Cohen ostensibly killed off this sullen skirt-chaser facade on 1977's Death of a Ladies' Man, his strangest and perhaps most singular record. On the album's epic, 9 1/2-minute wail of a title track, he sums up his approach to love and longing, with this wrenching cynical lament: "So the great affair is over but whoever would have guessed / it would leave us all so vacant and so deeply unimpressed? / It's like our visit to the moon or to that other star / I guess you go for nothing if you really want to go that far." It's not only that, per the cliche, it's better to have loved and lost. It's that it's better to have loved in order to have lost.

Maybe there's no place for such men in this world, on the right side of history, where the energies of hope and progressivism mobilize against the inherited virtues of male chauvinism; where it's no longer okay to be a bastard, no matter how self-styled or intellectualized or repentant. And maybe something inside Leonard Cohen knew this, when he wrote on You Want It Darker, "If you are the dealer, I'm out of the game."

It's nice, now, to imagine all that unreturned love coiled inside of Cohen radiating out into a world that so desperately needs it. But more than likely, it's been carried off with him, into death, into the darkness, into whatever there is, even if there's nothing. As the narrator remarks in the final passage of Cohen's 1978 experimental poetry book, also called Death of a Lady's Man [sic]:

Everyone I know has died off

He can still be seen

hobbling with his love" 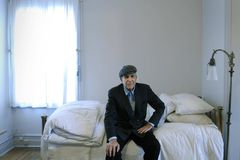 From the archives: Years of self-imposed isolation led to renaissance for Leonard Cohen
November 10, 2016
Follow us on Twitter @globearts Opens in a new window
Report an error Editorial code of conduct
Due to technical reasons, we have temporarily removed commenting from our articles. We hope to have this fixed soon. Thank you for your patience. If you are looking to give feedback on our new site, please send it along to feedback@globeandmail.com. If you want to write a letter to the editor, please forward to letters@globeandmail.com.
Comments