Imagine Neil Young at the border crossing, rapping with the immigration man about his green-card situation. He was born in one country, lives in another. Does he have anything to declare? Always. In fact, you can't shut him up.

Young's 39th studio album is The Visitor, a protest-record rally call, at turns ornery and reflective. It is also, specifically on the LP's first track, a definitive diplomatic-status declaration.

On a grungy, lurching rocker with a saloon-piano ambiance, Young, 72, waves the Stars and Stripes with all the romanticism and rheumatoid illusions a man of his generation and nation can muster. He rhymes "promised land" with "helping hand," while declaring himself a shining example of an immigrant living the American dream.

You're looking at one of the lucky ones

Came here from there to be here

Got to taste the life in freedom land

To play my part in God's plan

Young, of course, fled the persecution of Canada in the late 1960s, tearfully kissing the ground of a United States bountiful with civil-rights strife, soul-crushing assassinations and Vietnam War conscription. "I'm proud to be Canadian, but I don't let it hold me back," he has said.

Some 50 years later, he protests with gusto, railing against the sloganeering President in charge of the country Young still adores. "You're already great" is the fawning, heaven-sent chorus of the first cut, followed by a pitchfork-mob chant about "no wall, no hate, no fascist U.S.A." (The crowd chant is credited to "American citizens," a group to which Young does not belong.)

With music that moves coherently from rugged blues to megaphone-style angst to acoustic strums to Tex-Mex suggestions to occasional orchestral situations, The Visitor finds Young (with his potent backing band Promise of the Real) politically charged and speaking his mind, continuing the trend of 2016's Peace Trail and 2015's The Monsanto Years (also made with Promise of the Real).

Co-produced with long-time collaborator John Hanlon and recorded at Rick Rubin's Shangri-La Studios in Malibu, Calif., The Visitor is a better record than its predecessors. The production recalls the gritty vividness and vibrancy of 1972's Harvest, particularly on the album opener. As for the voice, the Old Man singer has never sounded older or gruffer.

Earth-as-a-church laments pop up more than once; on the anthemic grunge of Stand Tall, Young ridicules climate-change deniers. The conga-excited Carnival is an excellent outlier, with Young laughing maniacally and dancing to the kind of fevered dreams that Santana and the celebrated Mr. Kite used to enjoy.

The acoustic Almost Always will grab attention for its line about the "game-show host who has to brag and who has to boast," but the song carries another of the album's themes: Young's ruminations on his worth as a songwriter this long into the game.

"Do I have something to say," he asks, before suggesting his role is that of a "crazy searchlight, lighting someone's way." Also from Almost Always: "Hear that crazy little bird, callin' out his song / Standin' out on a limb, almost too long."

On the leisurely Rio Grande breeze of the album-closing Forever, Young wishes to assist with the environmental activism of Al Gore, singing of his need to make a difference, "tryin' now to help him with a word."

Do protest songs help? Hard to say. But it's probably true that an anti-Trump screed is less effective than a song more communal. Woody Guthrie's guitar may have killed fascists, but his This Land Is Your Land was galvanizing, not angry or polarizing.

(Young, of course, should be commended for any sort of protest at all. Wary of offending any one record-buying demographic, most artists stay clear of pulpits. Taylor Swift? For all she knows, "truth to power" was an eighties funk band.)

What is puzzling is Young's choice to publicize a distinctly American record with a Dec. 1 concert streamed online from "somewhere in Canada," according to a press release. Shouldn't he be singing on the White House lawn or at Mount Rushmore instead of Coronation Hall in Omemee, Ont.?

Young comes to Canada occasionally – for the high level of adulation and "dream comfort memory" nostalgia he can't get anywhere else. Now he comes for promotional purposes.

Though his tough-love message to America is laudable, with a launch concert in Canada, he's delivering his message from the wrong side of the fence. His album is called The Visitor, but in many ways he is a visitor here, not there. Dusting off his backpack Maple Leaf while living in his "promised land," Young wants it both ways. 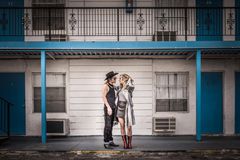 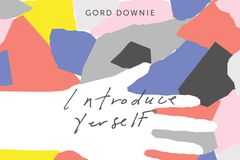