What was that line about the past not being gone, or even past? I can't remember, but Richard Hell might know.

Rock lore tells us that, in the seventies, punks like Hell (real name Richard Meyers) swept away everything bloated about stadium rock, replacing prog's album-length keyboard concertos with punk's short, sharp songs boasting no more than three chords, played by bands who could barely count to four. But in Hell's arrestingly well-written autobiography, I Dreamed I Was a Very Clean Tramp (Ecco/HarperCollins), the performer, songwriter, coiner of the phrase "blank generation" and consummate New York arts-world habitué describes a nascent punk scene that was more sophisticated than the legend.

The front man of Richard Hell and the Voidoids, Hell moved in circles among bands such as Television, the Ramones, Blondie and Talking Heads, as they clustered around a dive bar called CBGB. The scene in that dingy salon influenced artists the world over, including Brits such as Malcolm McLaren, who has admitted to copying Hell's fashion sense – ripped clothes held together with safety pins – in his outfits for the Sex Pistols.

A front-row seat to that moment made excellent fodder for a book, though Hell – who has published two acclaimed novels and several other works since quitting music in the early eighties – didn't quite set out to refashion the world's view of New York in the 1970s with his latest writing project.

"I thought it would be more or less a novel, except that you had the plot given to you," Hell says with a rueful chuckle. On the phone from his home in Manhattan, he describes his approach as "trying to get a grasp on my own life. To understand it, as well as to put it into a sort of container that I could then put behind me. But also to be able to see it from different angles. The point was to be as faithful to my experience as possible, to really try to capture it without any ulterior motives, except to figure out what happened."

Recounting in detail his early years as both a juvenile delinquent and an aspiring poet who absorbed everything from Dylan Thomas to Dada, Hell pays no lip service to the notion that punks had to be knuckle-dragging morons to be authentic. Before his music career began, Hell ran his own poetry magazine and was published in numerous others, traipsing around Manhattan not just in the dark edges, but in the higher echelons of the art scene as well. In Tramp, the once and future author disparages British rock journalists such as Julie Burchill – who made fun of Americans like Hell for their intellectual leanings – as "party functionaries in Mao's revolutionary army."

In fact, by the time he made Blank Generation in 1977, Hell had already expanded his musical horizons beyond the punk template. "There are three or four songs on [the album] that have all the qualifications," he concedes, "but by that time in my music career, I had a lot wider interests than I did when I first started out. I mean, all the songs in the Neon Boys [Hell and Tom Verlaine's pre-Television band] would fit people's list of attributes they think of punk as requiring."

Hell is unflinchingly honest by rock autobiography standards – or at least he seems to be, though only his contemporaries know for sure – detailing lurid sexual conquests but also his personal failings, including his behaviour toward his then-fiancée, the late Lizzy Mercier Descloux, and his heroin abuse, which contributed to his quitting the music business after making only two albums. Unlike so many autobiographies written to burnish the author's place in history, Hell's commitment to the truth, however ugly, frees him up to imbue I Dreamed I Was a Very Clean Tramp with a real generosity of spirit.

In the epilogue, Hell encounters a formerly close friend on the street and makes peace with his feelings of betrayal. But was it real, or just convenient?

"After all the things I'd said about what had happened between us, all of those things kind of fell away into this moment of understanding," Hell reflects. "But at any moment you can wonder whether you can be really true to the things that you're describing, including that last moment. Because I knew I needed an ending for the book, and I can't help suspecting that I sort of made that moment happen because I needed it for the book.

"It actually happened," he adds. "It happened exactly as I said."

Book Review
In How Music Works, Byrne examines the evolution of music into something completely new
September 21, 2012 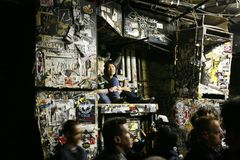 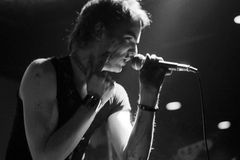 The three chords that changed the world
April 17, 2001
It's Rotten you didn't die young and imperfect
October 9, 2007
Follow Dave Morris on Twitter @morrisdave
Report an error Editorial code of conduct
Due to technical reasons, we have temporarily removed commenting from our articles. We hope to have this fixed soon. Thank you for your patience. If you are looking to give feedback on our new site, please send it along to feedback@globeandmail.com. If you want to write a letter to the editor, please forward to letters@globeandmail.com.
Comments