Tenor Richard Croft is inching backward up a 70-degree incline, while singing, on the stage of New York's Metropolitan Opera. One of a dozen computers parked on tables in the nearly empty auditorium controls an interactive projector that makes flames appear to flicker at his feet. Behind the steep surface that juts high above Croft's head, stagehands grip a cable attached to his belt, trying to keep any slack out of the line as he moves, fly-like, on the wall.

Welcome to the marriage of high technology and old-fashioned stagecraft that is Robert Lepage's first production of Richard Wagner's Ring cycle.

The Canadian director and his company Ex Machina have been working for three years on a four-opera extravaganza that Met general manager Peter Gelb says is "more complicated and more challenging than any production put on this stage before."

As the computer-controlled stage machinery begins to move during an orchestral interlude in this piano-dress rehearsal of Das Rheingold (the Ring's first part, which opens the Met's current season Sept. 27), the complexity and the challenge become stunningly apparent.

The surface Croft was standing on rises up and begins to twist, as its 24 constituent planks splay into a stage-spanning staircase that ripples around a spine-like horizontal axle. Never mind that some steps are nearly vertical - gravity works differently here. The gods glide along the planks, the fractured surface is flooded with colour and texture, and the music sinks into the infernal rat-ta-tat-tat rhythm that Wagner uses to represent the subterranean scene of the crime that sets the whole cycle in motion.

"Wagner was obsessed with making the Rhinemaidens look as if they were really swimming, with having giants walk on the stage," says Lepage during a break in rehearsal. "He needed to find or invent the machinery for these coups de théâtre, and each new Ring brings a solution or a proposition for them. We knew that video imagery, interactive video, all of these new tools that are available would be put at the service of that. Even if the staging is extremely conventional, the support for it is cutting-edge."

Extremely conventional? In some ways, yes.

"Most of the action is very simplistic," says Bryn Terfel, the Welsh bass-baritone who sings the pivotal role of Wotan, chief of the gods. "There's not much movement. In essence, every Wagner production is like that."

When Terfel saw his costume, with its breastplate and chain mail, he knew its provenance right away. "Look at pictures of the old Wagnerian singers. The costumes are back to those old productions at Bayreuth" - the really old ones, from before the revolution that shook Wagner staging in the 1950s. But nobody in Wagner's theatre back then had a stunt double, as Terfel does.

We tend to think of Ring productions as either traditional (like the one Otto Schenk did for the Met in the eighties) or far-out (like Phyllida Lloyd's 2005 cycle for the English National Opera, in which Brunnhilde blew herself up like a suicide bomber). Lepage doesn't work in those terms.

"Every time a stage director does a new Ring, they have the intention of refreshing it, and the way some people do that is to set it in the present day, or bourgeois 19th-century Vienna, or Nazi Germany," Lepage says. "They want to get even with Wagner for so many things. My way is to go back to the roots, and ask: 'What exactly is the story about? What was the first production like? What can we keep from that, and what doesn't really fly any more?' "

Lepage and his team (including set designer Carl Fillion and retired Radio-Canada opera broadcaster George Nicholson) spent a year mulling over that question, studying the Ring and its world in general terms, going back to the Norse and German legends that Wagner read and borrowed from. They looked at Wagner's musical technique, especially the recurring short themes (leitmotivs) that he used to link every event in the Ring with all the other parts of his myth narrative.

"We said, 'What if we give ourselves a set of rules, that are at least in the same nature as those leitmotivs? Let's say we have a very classical bare stage, with 24 movable planks. What different combinations can we make to find an image to accompany that leitmotiv?'

"We just kind of played with that, with acrobats, dancers and body doubles, until shapes came out naturally," Lepage says.

"So with one shape we said, 'Okay, those are the hands of the giants. What are the giants about?' They're just two giant hands saying: 'We want to be paid.' And one hand is the hand of the heart, and the other wants the money. Every time a shape triggered that kind of rich argument, we would keep it. We discovered a forest, and a staircase down to Nibelheim, and the spine of the dragon, and the horses of the Valkyries."

Textural video projections, controlled both by computer and by the actions of the performers, will give Lepage's "shapes" depth and variety, and allow for quick, quasi-cinematic scene changes without lowering the curtain. The fundamental character of the shapes will evolve as the cycle progresses.

"What happens in Das Rheingold is that we're in a world of mists and lightning, and fire and water, an elemental realm." Lepage says. "That's why the set is morphing into these elements that remind us of rocks and spines. As we move on, and the Ring tells the story of demigods and human being and eventually of society, and social classes and ranks, the set slowly moves toward architectural propositions."

The Met had to accept an architectural proposition of its own to prepare for this Ring. Steel girders had to be inserted under the stage to support the 45-tonne set, the weight of which rests on hydraulic towers at either side of the stage. The Met and its unions also had to adjust to having a separate, all-Canadian production company build and test the show in a Montreal warehouse (with input from music director James Levine, who stressed the Ring's "intimacy"), then install it and all related gizmos in the theatre. Gelb had to tweak the company's complex repertory schedule to accommodate the project, and find funds for a cycle that could cost upwards of $16-million (U.S.), at a time when the Met is running in the red.

"I was aware of the technical challenges we would be facing, early on," Gelb says. "I didn't understand the magnitude at the beginning, which was possibly just as well. I have great faith in Robert's creativity and vision for this project, and that gave me the fortitude to be able to see the company through a few bumps in the road."

As real singers replaced body doubles, they brought their own concepts to the project. Many of their ideas were good, Lepage says, but they often prompted changes to costumes and cues.

"The singers are already trapped in all these armours, and wires, and positions, and they have to sing and see the maestro, so you have to allow them to express things that make them feel free," he says. "They can't feel imprisoned by your concept, your blocking, your vision or aesthetic."

The show is already a hit with the cast in one sense. The mobile set (which is partially under manual control) often acts as a gigantic acoustic shell, propelling their voices into the theatre from the shallow forward apron where they do most of their singing.

Of course the real test is the first performance, and the three other openings to come ( Die Walkure is next, in April), and the full run of the cycle in the spring of 2012. Even those in the thick of the first instalment don't yet know how it will all turn out.

"Where's this machine going to go?" says Terfel. "We can't say what the equation's going to be till we've got to the end of Gotterdammerung."

Das Rheingold opens at the Metropolitan Opera Sept. 27, with free live screenings in Times Square and Lincoln Center Plaza. The Oct. 9 matinee will be broadcast in high-definition video to more than 1,500 movie theatres in 46 countries, including 150 screens in Canada. 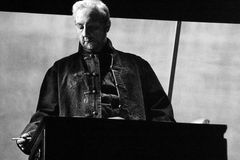