It is doubtful that Ronnie Hawkins's house is actually made of rattlesnake hide, just as it is dubious that the chimney on top, as he has sung, is made from a human skull. Beyond obvious matters of taste, it simply wouldn't be up to code. We do know, however, who it is Hawkins loves: Gordon Lightfoot, the man sitting next to him on stage at a news conference and launch party last week in Toronto.

"Whether you folks know it not, Gordon is one of the greatest storytellers on the planet, bar none," proclaims the drawling Hawkins, who at 80 years old is still one of the biggest talker-uppers around. "There are a lot of great songwriters, but very few have written 200 songs," continues the Who Do You Love singer, winding up for a finishing flourish, "and every one of them is a winner!"

Lightfoot, gaunt and lank-haired at the age of 77, just smiles and doesn't offer any aw-shucks modesty. The splashy event (held at Cambria Gallery, a showroom of deluxe quartz and other stone countertops in Toronto) was held to help promote Christmas Must Be Tonight, a new version of a gentle seasonal song sung by Hawkins. The event, attended by Cambria's moneyed clients and a sprinkling of music press, was surreal for many reasons, not the least of which being that the song was written by the Band's Robbie Robertson, not Lightfoot.

The garrulous Hawkins, a Cambria brand ambassador, is an Arkansas-bred long-time resident of Lakefield, Ont. He mentored Robertson and the rest of the Band when they were known as the Hawks on Toronto's Yonge Street strip in the 1960s, and the white-haired rockabilly man still answers to "Rompin' Ronnie" today if you speak loudly enough.

And although he refers to his new musical partnership with his long-time friend as the "dynamic duo," Lightfoot himself says he helped only with the tempo of the new version of the 1977 song. As Hawkins explains it, "It was a great song, but [the Band] looked like they were hurrying it a little bit to get it done."

After the news conference, Hawkins's version of Christmas Must Be Tonight is played on the room's sound system. It is an odd sight to behold, a crowd looking at the carbon-dated duo sitting on stage as the song blares over the ambient noise of clinking wineglasses back at the drink table, where rum-based concoctions are outstandingly dubbed Hawktails.

Hawkins mouths the words he can remember. Lightfoot leans over to him and says something a couple of times, but otherwise listens to the music while chewing on a toothpick. Without a live performance, the affair takes on a zoo-like environment.

Christmas Must Be Tonight is available on iTunes, but The Pony Man, another cover song newly recorded by Hawkins with help from Lightfoot, won't be released until later. The story-song lullaby, also unveiled at the launch party, was written by Lightfoot for his children. It appears on his 1970 album Sit Down Young Stranger. "Everybody wants a pony, I wanted one myself," Hawkins tells The Globe and Mail after the news conference, relaxing in a small room with Lightfoot as the party carries on outside. "When the pony man comes to see ya, it's almost better than Santa Claus."

Indeed, for Lightfoot, Hawkins's version of The Pony Man is a present in itself. "I never heard a cover version of one of my songs I didn't like," says the Sundown singer, who has been known to pop into Hugh's Room when the west-side folk club holds its annual salute to him. (Hawkins himself recorded Lightfoot's Early Morning Rain and Home from the Forest. And, on a side note, Lightfoot also wrote Talkin' Silver Cloud Blues, which was not recorded by Hawkins, but was written about him.)

Does Lightfoot agree? "You hope so, but whether it does [get played] or whether it doesn't, it makes no difference to me," the still-touring troubadour says. "Just as long as I can play them and the fans enjoy them, I'll do the best songs in my repertoire." 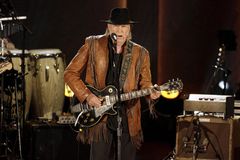 Newfoundland musician Ron Hynes was a man of a thousand songs
November 23, 2015