Rush was finally inducted into the Rock and Roll Hall of Fame on Thursday, in front of a Los Angeles crowd packed with the same ardent supporters who campaigned for so long to see the prog-rock virtuosos recognized. Then, the Toronto group took the stage for a blistering blitzkrieg performance of "Tom Sawyer" and "The Spirit of Radio" that reminded everyone why their long-lasting exclusion had seemed so unthinkable in the first place.

After an uproarious speech from longtime fan Dave Grohl, Rush took the stage: frontman and nimble bassist Geddy Lee, dexterous guitarist Alex Lifeson and powerhouse drummer Neil Peart. Splashy guests joined most performances on this night, but as "Tom Sawyer" cracked down like thunder from the sky followed by their anthemic "The Spirit of Radio," the core power trio was all anyone really needed.

It was a sharp contrast from their low-key acceptance speech, in which Rush's three members seemed a little awed by the spectacle of the star-studded evening.

Added Lee, moments later: "I have to say this is a little overwhelming for a nice Jewish boy from Toronto."

The fans waited and waited for this honour, pushing and petitioning for the perennially disrespected band to finally take its place among rock royalty, and they had to wait some more on this night: Rush's induction was the climax to a marathon show that ran more than four and a half hours.

And it was certainly clear who the evening's headliners were.

Rush had long been considered the Cleveland-based rock shrine's most egregious snub, having been eligible for induction since 1998 but passed over year after year in favour of acts including Madonna, Donovan, the Hollies, Blondie and the Red Hot Chili Peppers.

So they were both a sentimental pick and the overwhelming audience favourite. All the gala's honourees were introduced to an enthusiastic reception, but the audience reached a bona fide tizzy with only three simple words spoken off the top by the show's host: "And from Toronto..." An eruption of applause followed, and when the cameras caught the trio smiling at their table, the applause grew louder still.

Indeed, Rush fans were everywhere around the Nokia Theatre prior to the ceremony — fans in Rush-branded baseball jerseys, bandannas, leather jackets and tour T-shirts as tattered as a pair of Peart's drumsticks after a marathon gig.

The crowd was so heavily tilted in Rush's favour, Public Enemy's Chuck D said backstage that he and director Spike Lee joked that it felt like the hip-hop outfit was playing a road game.

"He said: 'We're in Boston Garden right now!"' the rapper said to laughter.

And in a light-hearted but reverential speech, Grohl reminisced upon first receiving his vinyl copy of "2112" and marvelling at the "infamous" photo in the liner notes: "three grown men, arms crossed, standing proudly in white satin kimonos and skin-tight pants." Later, he and Hawkins performed "2112" dressed in similar get-ups complemented by ridiculous wigs.

"Rock and roll has forever been ensconced in mystery ... but there's one mystery that surely eclipses them all: when ... did Rush become cool?" said Grohl, who later shouted the name of every single Rush LP in chronological order.

"From day one, the band built its following the right way. No hype, no (BS), they did it from the ground up without any help from the mainstream press," he added, before coughing the words "Rolling Stone" into his sleeve.

"Their influence is undeniable and their devoted fanbase is only rivalled by the Grateful Dead. Look at you people, all of you people, right here! And their legacy is that of a band that stayed true to themselves no matter how uncool they may have seemed to anyone."

Despite all the hoopla, Rush actually gave the most concise speech of any of the evening's honourees. In fact, guitarist Alex Lifeson didn't see fit to say any actual words at all — instead, he just trilled the word "blah" over and over again in different tones and inflections while his bandmates chortled.

Ultimately, though, Lee did pay his respects right back to those relentless fans, while that same worshipful lot whooped in the aisles.

"We have to thank the most passionate, incredible fanbase around the globe," he said, after his band joined a select group of Canuck acts in the Hall that also includes Neil Young, Joni Mitchell, Leonard Cohen and the Band. "That's you guys. For not only supporting and encouraging our musical progress over the years, but for the insistence of their voices, which has most certainly led us to this evening.

Lee inducted them wearing the uniform of his pizza deliveryman character Mookie from his classic film "Do the Right Thing," which prominently featured Public Enemy's classic "Fight the Power," while Calypso legend Harry Belafonte called the group "one of the most influential artists in the world."

Chuck D — who gave bandmate Flavor Flav the "wrap it up" sign several times during a rambling if occasionally hilarious acceptance rant that included an off-colour remark about producer Hank Shocklee's mother — provided a thoughtful speech, one which included an unlikely shout-out to Rush (whose "Tom Sawyer" the group sampled in an ensuing performance) and also anticipated arguments against the inclusion of hip-hop acts in a Hall of Fame nominally devoted to rock.

"(We) see hip hop take its rightful place in the Rock and Roll Hall of Fame and some people out there are thinking: 'Well, there goes the musical neighbourhood,"' said the group's cerebral leader.

"Let us not forget we all come from the damn blues, all right? Let's not get it twisted."

Droll 69-year-old troubadour Randy Newman kicked off the ceremony with a rollicking performance of his locally flavoured hit "I Love L.A.," with an assist from an all-star cast including Jackson Browne, John Fogerty and Tom Petty. Eagles vet Don Henley handled the induction and praised Newman's "extraordinary body of work." Backstage, the 69-year-old Newman said he hardly anticipated the honour.

"I didn't think it would happen until I died or something," he said to laughter.

Also unanticipated? A surprise appearance from talk-show maven Oprah Winfrey, who took the stage to celebrate inductee Jones with no prior warning from organizers. Jones, best-known of course for producing Michael Jackson's titanic "Thriller," has a record 79 Grammy nominations and 27 wins to his name. And as Winfrey explained, he was also instrumental in helping the chat queen land a lead role in Steven Spielberg's 1985 drama "The Color Purple."

"He discovered me for 'The Color Purple' and it changed the trajectory of my life."

After the 80-year-old Jones gingerly took the stage, he joked that he, too, had waited a long time for this particular honour.

"I didn't want to get into the hall of fame too early," he quipped. "So we waited a while."

Chris Cornell introduced his "hometown heroes," the pile-driving Seattle rock outfit Heart, who had roots in the '70s Vancouver rock scene. Sisters Nancy and Ann Wilson were hailed for breaking ground for female rock musicians, but they said it wasn't always easy.

"We came from an era when women normally did not rock, and women were not expected to be leaders. There were mainly four jobs for us to choose from: teachers, mothers, nurses or waitresses," said guitarist Nancy Wilson, whose band put in a strong performance with an assist from Alice in Chains frontman Jerry Cantrell.

"Music makes us all equal and perfectly human."

King, meanwhile, was inducted by John Mayer, who gamely showcased his high-school yearbook photo and his chosen quotation — which happened to be a line of King's: "the blues don't change."

"My dreams of playing the blues came true, sort of," said Mayer, who noodled on a Gibson Flying V onstage just like the one King played — though his was nicknamed Lucy. "Albert King is why guitar-face was invented."

Fellow posthumous honouree Donna Summer, the disco queen, was inducted by Destiny Child's Kelly Rowland. Though she was filling in for an under-the-weather Christina Aguilera, she effortlessly hit some humorous notes in her speech dedicated to the "incomparable" talent. She even sang a few notes of Summer's ubiquitous "Love to Love You Baby," which in its album version stretched to nearly 17 minutes.

"I'm pretty sure me and a lot of y'all in here were made to that record," Rowland said, smiling.

Indeed, there were plenty of flashes of humour amid the reverential speeches.

"You don't know how worried I was when they told me these guys were going to induct me," said Adler, whose fans in the crowd included Jack Nicholson.

The performances were something else, too. Jennifer Hudson, in a snug glittering pantsuit, sang a sassy take on Summer's 1979 smash "Bad Girls" while Flavor Flav hopped up and down in joy, slickly dressed R&B crooner Usher strutted and shuffled fluidly while belting Jackson's "Rock With You" in tribute to Jones, and Public Enemy's electric medley had many in the crowd on their feet, swaying their hands in the air.

Still, it was hard to deny this was Rush's night, and nowhere was that more evident than when the three master musicians took the stage together.

If the trio didn't look particularly comfortable during their speeches, everything felt right as soon as they donned their instruments and Peart started pounding the drum intro to "Tom Sawyer."

"It is fitting," Peart said in his speech, "that we receive this honour as a working band, in the middle of a tour, in our 39th year."

After the Rush: 10 more Canadian contenders for the Rock and Roll Hall of Fame
April 18, 2013 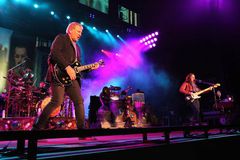 Rush finally heads into the Rock and Roll Hall of Fame
April 18, 2013 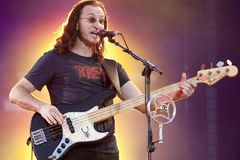 Why Rush deserves its spot in the Rock and Roll Hall of Fame
December 11, 2012 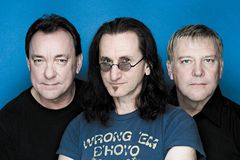