Merriam-Webster just declared the word of the year for 2016 to be surreal. This is far too subtle a concept to be appropriate. The more suitable word for the year is simply unreal. As in false.

Our taste in art and in spectacle now accepts and even revels in a certain kind of falsehood. A few days ago, on New Year's Eve, the great celebrity and sort-of singer Mariah Carey humiliated herself with an obvious lip-synching gone wrong in Times Square, just before midnight, while being televised internationally to an audience of millions. Or rather, she didn't feel humiliated, and nobody humiliated her; media repeated her nonsense story about a technical malfunction – someone else was blamed – with politeness. The reports on the incident had an embarrassed, reluctant quality. Nobody wants to spoil the fun, especially of a feel-good event such as New Year's Eve. She's still going to be popular; she is famous and sexy. She has had some of the usual celebrity lifestyle troubles. We are sympathetic to that.

If celebrities are our new gods, then they are pagan gods –frequently in trouble, mischievous. They remain gods whatever their misdeeds. The star of a reality-TV show, for example, can easily be forgiven for making appalling remarks about assaulting women, for he is a god; the issue is not right or wrong, but his status, and his narrative. And we are so used to the idea of a reality-TV show being not exactly real that we also accept the idea that a live performance is not exactly live.

Who cares if Mariah Carey can sing? Or even wants to? We have her records and we would rather just hear those played at extremely loud volume, and see the dancing. Nobody's career gets ruined by these things any more – not even by outright lying.

If you watched, you saw that Carey got up to mouth her first song and for some reason the vocal track did not play. (I could almost see the frantic techie at his computer, clicking, cursing, clicking.) So she danced around and murmured apologies. The vocal came up on the next track and she lip-synched rather half-heartedly; there were passages of several bars in which she just stopped pretending. Her people later released an explanation: She couldn't hear the "backup vocals" in her earpiece. This story is nonsensical even to lay people: there were stage monitors clearly visible in front of her and to the side. She could hear, all right. She just didn't want to sing.

The story died within 24 hours because it is not that interesting: Everybody knows that Mariah Carey does not like to sing in public very much. The Internet bubbles with clips of "Funny Mariah Carey Lip Synch Fails" or "How to tell when Mariah Carey is lipsynching"and "Mariah Carey Can't Sing Any More" – compilations of her voice cracking or failing when she actually tries.

Her "Elusive Chanteuse" performance in Tokyo in 2014 is perhaps the best-preserved evidence of a failing voice: she sounds, for long moments there, off-key and scratchy, like the voice of, well, a non-singer.

She has particular difficulty attaining the falsetto squeak or "whistle" sound that made her famous early on. We've known this for a long time. We're okay with it.

When did this shift happen? It certainly hadn't happened in 1990, when R&B singing duo Milli Vanilli turned out to be not singing at their concerts (or even on their album). Their disgrace was immediate and drastic. They were sued, their Grammy was withdrawn. They never recovered.

How earnest we all were in 1990! How we took seriously this idea of artistic originality, of real talent as opposed to manufactured façade – as if that distinction were at all meaningful!

In 1991, Whitney Houston lip-synched the U.S. national anthem at the Super Bowl and it was kept a deep secret until 2001, when a producer revealed that they never would have risked a live performance at such a important event. Too much could go wrong.

By 2001, this was accepted with a shrug. And by 2009, singer Jennifer Hudson lip-synched the same anthem at the same event and the organizers were up front about it from the start.

"There's too many variables to go live," pregame show producer Rickey Minor told ABC News at the time. "I would never recommend any artist go live because the slightest glitch would devastate the performance."

Now, Mariah Carey's fans are okay with her taking a very large sum of money for standing up on a stage at the biggest televised pop music event this year since the Super Bowl and not singing. And then lying about it.

There is of course a parallel rise in a longing for the authentic. A longing for handwritten letters and acoustic guitars and garden-raised greens and vinyl records. This was detailed in David Sax's 2016 book The Revenge of Analog: Real Things and Why They Matter. It is a book about nostalgia as much as anything else. And it has to be said that this cultural current really belongs to the sophisticated: to the educated and urban. To the class who voted Democrat.

But the popular acceptance of the inauthentic, the unreal, the idea that spectacle is not mere packaging but valuable in itself, this too is sophisticated: it is the concretization of difficult French philosophy from the 1970s, it is the result of the intensive media exposure that has made us both jaded and savvy, at once skeptical and cynical. It is not that we have become gullible, merely knowing. 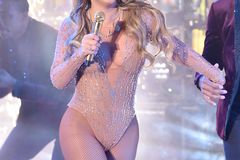 Dick Clark Productions rejects Mariah Carey’s sabotage claim
January 2, 2017
Jingle belle: Mariah Carey tells us all she wants for Christmas
December 8, 2016
Follow us on Twitter @globeandmail Opens in a new window
Report an error Editorial code of conduct
Due to technical reasons, we have temporarily removed commenting from our articles. We hope to have this fixed soon. Thank you for your patience. If you are looking to give feedback on our new site, please send it along to feedback@globeandmail.com. If you want to write a letter to the editor, please forward to letters@globeandmail.com.
Comments