'If you feel things, you got beat up this year." So said the musician Kevin Drew, speaking to host George Stroumboulopoulos on CBC Radio 2, deep into a heavy 2016. "I felt the anxiety," Drew explained. "I think we all had a hard time with evil lurking around."

The recent episode of The Strombo Show was devoted to the people lost over the previous 12 months, a calendar that began for some on Jan. 10, with the death of David Bowie. A week earlier, the French composer Pierre Boulez had died; the week after Bowie's demise, Eagles singer-songwriter Glenn Frey left too soon. The month wasn't over before Jefferson Airplane's Paul Kantner died at the age of 74, and more would fail to make it to 2017.

Drew co-produced the Tragically Hip's 2016 release, Man Machine Poem. On May 24, the Canadian rockers announced a tour – and the news that singer-lyricist Gord Downie was suffering from terminal brain cancer. The Hip tour galvanized a nation. Not done – not by a long shot – in the fall, Downie released Secret Path, a stunning solo album and elegant multimedia project about the tragic, lonely death of 12-year-old Ojibway boy Chanie Wenjack in 1966.

On Nov. 7, Leonard Cohen, the Montreal troubadour, hat-wearer and onetime haute monde cult figure, died at the age of 82. He will be remembered for his final album You Want it Darker, his desanctifying of the word "hallelujah" and for telling us there's a crack in everything – "that's how the light gets in."

But it wasn't all bad in 2016. The light got in with successful reunions, gobsmacking performances, fantastic recordings and a big dose of protest songs and melodious activism. We give you, then, the year that was, musically speaking.

Reunited and it felt so good

With a new album (Good Times!) and a 50th-anniversary tour, the Monkees were too busy singing to put anybody down. Out of nowhere, the long dormant hip-hop pioneers A Tribe Called Quest released We Got It from Here … Thank You 4 Your Service, which featured contributions from member Phife Dawg, who died several months prior to the album's release. LCD Soundsystem regrouped after four years apart to play Coachella, and the Beach Boys celebrated the 50th anniversary of the milestone album Pet Sounds with a world tour. Axl Rose welcomed top-hatted guitarist Slash back into the jungle, a détente that resulted in a lucrative summer tour for the fractious Guns N' Roses.

Yes, the reaping was grim

And yet the CD died, and no one really cared

With his mixtape Coloring Book, the American hip-hop phenom Chance the Rapper became the first artist to hit the Billboard 200 chart without selling a single physical copy. The trend was a continuation from 2015, the first year, according to the International Federation of the Phonographic Industry, that digital revenues outstripped the sales of physical product.

Sisters be doing it for themselves

While Beyoncé's Lemonade topped many year-end lists as 2016's best album, her younger sibling Solange earned a seat the table with her album A Seat at the Table. The tastemakers at Pitchfork ranked it the top of the heap, two spots ahead of sis's Lemonade. Speaking of family affairs, reverse nepotism was in vogue in a year that saw Drake's dad, Dennis Graham, release his debut album Kinda Crazy. As well, Nova Scotia singer-songwriter Joel Plaskett recorded an album with his father Bill. Solidarity is set to come out in February.

The Canadian hip-hop star's One Dance passed one billion streams on Spotify, becoming the first song ever to hit that landmark number. In December, Billboard reported that the Started From The Bottom rapper had tallied 4.7 billion streams in the past 12 months, padding his lead as Spotify's most-streamed artist of all time (8.7 billion streams). As well, the image of tiny Drake sitting on the CN Tower for the album cover of Views became the year's most excellent Internet meme.

Mercurial rapper Kanye West went on a bizarre rant at a concert in Sacramento on Nov. 19. After cancelling the remaining dates of his Saint Pablo Tour, the husband of Kim Kardashian was hospitalized due to stress and exhaustion. A month earlier, pop music enfant terrible Justin Bieber stormed off the stage during his concert in Manchester, England, when the audience failed to listen to his important talking between songs. Rapper Azealia Banks's year of living controversially ended with a strange spat involving actor Russell Crowe.

At Super Bowl 50, Beyoncé performed her new single Formation, an act widely interpreted as a rallying cry for the Black Lives Matter movement. Perhaps in response, a tone-deaf Remigio Pereira of The Tenors altered the lyrics to O Canada and held up a sign that read "All Lives Matter" when the Canadian vocal quartet performed at the MLB All-Star game in San Diego. Pereira was subsequently fired from the group for his inharmonious gesture. Other protest songs and musical activism was better received in 2016, and heavyweights Bruce Springsteen, Pearl Jam and Maroon 5 were among acts which cancelled concerts in North Carolina over the state's anti-LGBT legislation.

Nominations for the 2017 Grammys (which mostly celebrate music from 2016) were hoarded by an elite few: Beyoncé's "visual album" Lemonade earned her a pack-leading nine noms, with Drake and Rihanna each grabbing eight nods, including one for their collaborative single Work. Adele, for her bland album 25 from late 2015 scored five nominations.

Pop star Kesha accused producer Dr. Luke of sexual and emotional abuse and fought to be released from her contract with Sony. In another legal battle, Led Zeppelin won a lawsuit that alleged they'd plagiarized the music to Stairway to Heaven from Spirit's instrumental Taurus.

And at a time when classic rock diminished further from relevancy, Bowie and the Rolling Stones (with Blackstar and Blue & Lonesome, respectively) issued two of the most critically well-received discs of the year. Bob Dylan won a Nobel Prize in literature and performed with Paul McCartney, Neil Young, the Who, Roger Waters and the Rolling Stones at Desert Trip, a baby-boomers' delight dubbed "Oldchella" that added a new wrinkle to the year's festival calendar.

Apple Music and Tidal secured exclusive deals with Beyoncé, Drake, Frank Ocean, Kanye and many others, but a backlash began mounting against the fan-unfriendly practice. According to Rolling Stone, Lucian Grainge, head honcho of the world's biggest record label, Universal Music, sent an internal memo banning all the label's artists from making exclusive deals. Can't we all just get along?

Gord Downie: The Globe’s Canadian Artist of the Year
December 22, 2016 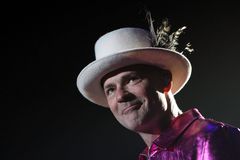 Beyonce, Drake, Bieber top Grammy nominations
December 6, 2016
Follow Brad Wheeler on Twitter @BWheelerglobe
Report an error Editorial code of conduct
Due to technical reasons, we have temporarily removed commenting from our articles. We hope to have this fixed soon. Thank you for your patience. If you are looking to give feedback on our new site, please send it along to feedback@globeandmail.com. If you want to write a letter to the editor, please forward to letters@globeandmail.com.
Comments