"Tear stains" doesn't exactly rhyme with "I'm in Houston," but it is close enough.

I Love You But I'm Lost is a naked, piano-driven ballad, sung strongly by a broken chanteuse, laying it on the line. Sharon Van Etten's new record Are We There is a breakup record. The Brooklyn-based indie songstress toured her previous album – the career breakthrough Tramp – relentlessly, apparently at the expense of other important things. "I love you but I'm lost between the pain and cost," she emotes, gorgeously and unfiltered, singing herself back home.

Are We There, out May 27, is somewhere between moody country-soul, raw Patti Smith poetry and emotive indie singer-songwriter, and on it we hear Van Etten, 33, in her most open-hearted voice yet. The production on her previous works tended to favour a hazier soundtrack, but on the stripped-down and self-produced Are We There, the singer's expressions of fear and vulnerability are clear in the mix. She may be lost herself, but we know exactly where she stands – right here in front of us, by way of Houston, for example.

In a recent interview, Van Etten spoke about the sacrifices of her career. "It's a really weird thing to do," she said. "I'm deciding not to have a real life because I feel like the world has to hear my songs." (I hope all you song-stealing free-grazers out there are looking shame-faced right now.) Van Etten has paid for her muses, and they don't come cheap, even the non-union ones.

Van Etten will be back on the road soon enough – Western Canadian dates in early July and an appearance at Winnipeg Folk are part of the tour so far – and there she'll explore and relive this new material on a nightly basis. The stoic, soaring opus Your Love Is Killing Me is even heavier than you could imagine: "Burn my skin, so I can't feel you; stab my eyes, so I can't see." My gosh, even Nick Cave might recoil.

Perhaps Van Etten can relax with nineties soft-rock and possible sing-along Every Time the Sun Comes Up. It goes without saying that "I washed your dishes but I shit in your bathroom" is a great line and a crude metaphor.

On the solo piano of I Know, Van Etten wrestles again with her place and muse. "Now I turn into a lover on the side," she sings strongly. "I cannot tell the poet eye apart from mine." It recalls the affecting manner of Ryan Adams, whose Love Is Hell came in two parts, the subject being so uncontainable.

So where is Van Etten now, after the songs have been written and released? You should notice that the album title carries no question mark. It's rhetorical, and Are We There is Van Etten's self-evident answer.

The Week in Music

Top-selling albums in Canada for the week ending May 18: The Black Keys turned blue into gold last week. The band's broken-hearted psychedelic-rock disc Turn Blue debuted at the top of the Nielsen SoundScan chart. Trailing were Marie-Mai's M, Michael Jackson's Xscape, Sarah McLachlan's Shine On and the soundtrack for Disney's Frozen.

Top single: John Legend's All of Me rules the Billboard Hot 100 for a third week, but the big splash on the song charts is Michael Jackson's Love Never Felt So Good duet with Justin Timberlake, which jumped from No. 22 to No. 9, making the King of Pop the only artist with top 10 hits in five decades.

Released this week: Bry Webb's Free Will, Coldplay's Ghost Stories, The Roots's … And Then You Shoot Your Cousin, Conor Oberst's Upside Down Mountain and Jolie Holland's Wine Dark Sea.

The maestro Quincy Jones and his singing Montreal protégé
May 12, 2018 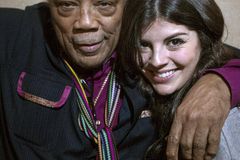 Coldplay struggles with ‘conscious uncoupling’ and ghosts from their past
May 12, 2018 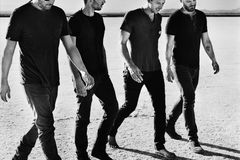