And the winner for the best supporting singer in a Juno-y role goes to Kathryn Dawn Lang. The Alberta-bred singer and constant craver swept hearts and won admiration for her dramatic turn as an honour-accepter at Sunday's televised Juno gala in Regina.

"I think the fact that I'm standing here receiving this award says more about Canada than it does about me," she said, speaking about her induction into the Canadian Music Hall of Fame. "Only in Canada could there be such a freak as k.d. lang receiving this award."

The combination of spunk and home-spun elegance from the gifted singer said a lot about lang. She would have dominated a sparkling, swiftly moving Juno ceremony without even singing a note, but she later performed Sing It Loud to a Brandt Centre crowd which heard every one of her words. The tune, which is the title track to lang's most recent album, is autobiographical and a victory speech on the power of music and self-identity – "sing it loud, so everyone knows who you are."

No one at the 2013 Juno gala sang louder and with more triumphant gusto than Serena Ryder, the Ontario folk-rock siren who captured the prize for the year's top adult-alternative album, Harmony. Ryder battled depression and issues of self-doubt prior to the writing and recording of a record that is easily the finest of her productive career.

Rocking the Gibson Flying V, she winningly performed the anthemic hit Stompa – "gotta get up, listen to me" – and later popped up to contribute vocals on Stand Up and Run, a euphoric rock number from Mississauga's favourite punk-pop sons, Billy Talent.

Ryder and lang overshadowed the evening's top-billed talent and host, the handsome Michael Bublé. But the Burnaby, B.C.-bred crooner was capable and affable as emcee, and offered up a New Orleans-jazzed version of his hit single It's a Beautiful Day.

The fellow British Columbian Carly Rae Jepsen was the weekend's most successful collector of glass statuettes. The pretty popstress won the 2013 Juno for the best single, even though Call Me Maybe was initially released in 2011. Talk about your call-waiting. The catchy tune deserved to win, and the same could be said of her album Kiss taking honours as the year's top pop album.

But Kiss was also recognized as the year's best overall album, defeating a disappointing cast of contending LPs that included Céline Dion's Sans Attendre, Hedley's Storms, Marianas Trench's Ever After and Justin Bieber's Believe. Any one of the nominees in the adult-alternative category (Bahamas's Barchords, Kathleen Edwards's Voyageur, Royal Wood's We Were Born to Glory, Ryder's Harmony and the self-titled disc from the Barr Brothers were more defensible choices than Jepsen's Kiss (more of a quick peck on the cheek than anything meaningful).

"There are so many people who deserve this," said Jepsen, whose speech was babbled and whose long gown was yellow but not mellow. Too bad she wasn't one of the deserved.

At Saturday's non-televised gala (where the bulk of the awards were handed out), Leonard Cohen bested Johnny Reid, Justin Bieber, deadmau5 and Jepsen for the honour of artist of the year. On Sunday, the fedora-wearing bard was recognized as the year's top songwriter for three songs – Amen, Going Home and Show Me the Place – off his thoughtful 2012 album Old Ideas.

It was a nice touch that the award was presented by Adam Cohen, the son of the singer-songwriter who wasn't brought to Regina to hand a trophy to Afie Jurvanen (a.k.a. Bahamas), Edwards, the Arkells or Hannah Georgas, the category's other worthy nominees. The elder Cohen wasn't on hand to accept his two awards, which were the third and fourth Junos of his illustrious career.

Georgas, the ice-cool singer from Vancouver, performed her sleek pop-rocker Robotic with calm confidence. Artful rockers Metric aced the title track off their nominated Synthetica album; singer Emily Haines was dynamite and compellingly blonde, and even Marlene Dietrich would agree that she's quite the with-it entertainer.

With his charismatic appearance, Luke Boyd, the blue-eyed Nova Scotian who calls himself Classified, showed a nationwide audience just why his Inner Ninja won the prize as the year's top rap recording. He's a talented, level-headed man.

The flamboyant Marianas Trench pulled out all the stops while presenting its single Stutter. A gospel choir was employed, as was a flying singer. It was all too much, really.

The night's centrepiece was lang, of course. Fellow songbird Anne Murray introduced her perfectly as someone who broke all the rules, someone who made us smile and someone who showed that "a great voice can sing anything it wants."

In lang's speech, she praised Stompin' Tom Connors and Rita MacNeil, two singular performers who recently passed. She closed with this: "So I am here to tell you, my friends and my countrymen, that it is okay to be you. It is okay to let your freak flags fly. Embrace the quirkmeister that is inside all of us."

Consider the quirkmeister embraced, and a lifetime achievement fittingly noted. Some freak. Some flag. 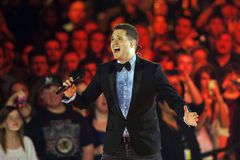 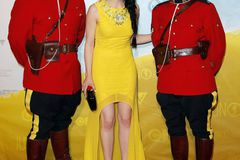 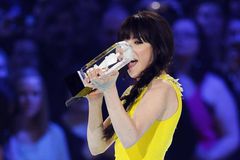 Michael Bublé and how Auto-Tune became the Botox of pop music
April 20, 2013 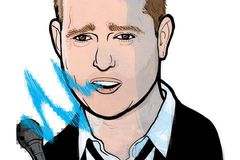 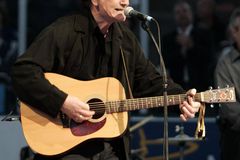