If you've seen Spirit of the West live, you appreciate the truth of its name. This is a band with spirit in spades, led by John Mann out front: a whirling dervish of energy, swinging for the fences every night, with a gorgeous voice and the stage banter of a fast-living but soulful poet.

But early-onset Alzheimer's disease is robbing Mann of his gift. After 32 years, the band is preparing to play its final reel, its final jig – its final gig. Not quite two years after making his dementia public, Mann, who is only 53, is in decline and it's time. The band has been on a farewell tour and plays its final shows this week in Vancouver at the Commodore Ballroom, Thursday to Saturday night.

"Johnny is so brave and, in a way, so stubborn. I know he'd really want to keep doing it, but we just do not want it to become embarrassing," says bandmate Geoffrey Kelly, Mann's writing partner and co-front man. "And man, there are still moments when he sounds so fantastic; just like his old self."

"Oh I love it, totally love doing it," Mann says this week during an emotional interview, conducted with the help of his wife, Jill Daum, who is an actor and playwright.

"I asked him about the tour and he says he's not thinking about the past or the future," Daum says. "He's just loving being onstage."

Mann and Kelly have been with the band from the beginning and other members have come and gone.

Its final incarnation includes Vince Ditrich on drums (he also manages the band), Hugh McMillan on bass, as well as other instruments, Tobin Frank on accordion and keyboards, and Matthew Harder on guitar.

From its early days, Spirit lived a kind of double life on the folk and university circuits – a folky acoustic band with Celtic elements and a celebratory vibe. Political, And If Venice is Sinking and Save This House were big songs for the band, but Home for a Rest is their signature tune – a frosh week and wedding staple that is guaranteed to get the party going.

Because of Mann's Alzheimer's, I sent some questions for him to Daum in advance of our interview, including whether there were specific highlights from the band's long life. He mentioned three: touring with the British band the Wonder Stuff in 1990, the Proclaimers opening for Spirit at the Commodore in 2004 and recording the album Weights and Measures in Devon, Britain, at the studio owned by Jethro Tull guitarist Martin Barre in 1997.

I also asked how important the band has been in his life. "Hugely huge" was his response.

"He grew into who he is being onstage with those guys, writing with Geoffrey," Daum adds in the interview. "That's what formed him as an artist."

The band never broke up, but went on hiatus in the late 1990s. While they still did the odd show, they slowed down and the guys were able to do other things. Mann concentrated on acting, including live theatre with acclaimed roles in musicals such as Miss Saigon and Les Misérables.

On what was to be the final show at the Vancouver Playhouse Theatre Company, an announcement that shocked the city, Mann showed up at an impromptu vigil, climbed on top of his Ford Focus and sang Save This House.

The band began performing again steadily as a legacy act – fewer shows but asking for more money. "It became really, really fun again and everybody kind of got a second wind," Kelly says.

But the band has been plagued by health problems. Kelly has Crohn's disease. Ditrich needs a kidney transplant (in fact, he has been very ill in hospital this week, trying to recuperate so he can perform with the band for its final shows). Mann went through treatment for colorectal cancer – the inspiration for his album The Waiting Room, and a play of the same name, written with playwright Morris Panych, premiered last year. And then, the Alzheimer's diagnosis.

The band kept things going by creating a safety net for Mann: Gradually he was relieved of his guitar-playing duties, with Harder taking over so that Mann could focus on singing; Frank rigged up the iPad with lyrics and operates it with a foot pedal while performing; the guys, led by Harder, jump in if Mann starts to fall out of time or lose the lyrics.

"We really feel right now onstage we are doing everything humanly possible to allow him to have the best show every night," Kelly says.

But it's getting more difficult and it became clear that it was time to call it a night. The band has been touring one last time.

These days it takes "every brain cell" Mann has to perform, as Daum describes it.

"I just have to be so focused because I have Alzheimer's," Mann says.

On show days, everything is geared toward that night: lots of sleep, healthy food, exercise. Mann can no longer work out at a gym – he can't operate the machines – but he runs (with Daum). Before the show, there is a double shot of espresso – and no visitors backstage.

But the after-show hanging out has grown longer as the guys stretch their time together, knowing that it's about to end.

The band has also altered its no-wives-allowed tour rule, as Daum's presence is now crucial. The circumstances are obviously terrible, but a silver lining has been her late window into the band's on-the-road world.

"I'm so grateful to witness it," says Daum, in tears. "Partly because he can't tell me about it. … I just feel like I've witnessed this tour for him. I got myself a book so I could write down everything that happened that I thought was beautiful to try to keep me focused on that so I wouldn't be thinking about what we're losing or just to stop me from being bitter. And that's been really great too; just to focus on the beauty of this brotherhood is just gorgeous."

A highlight of these past few months was playing Toronto's Massey Hall – a first for the band and a euphoric experience captured in a new documentary, Spirit Unforgettable, which will have its world premiere at Hot Docs in Toronto on April 30. Filmmaker Pete McCormack, friend to the band, put his life and other projects on hold – and put up about $100,000 of his own money, he figures – to make the film, knowing that time was of the essence.

"I had to go and dive in right away … funding or no funding, because of the disease," says McCormack, who witnessed Mann's regression first-hand through filming. "The decline is quite relentless," he says. "It's overshadowed by his gift of music. The music is the least of the problems, do you know what I mean? He just gets quieter."

"On the stage, he is still able to summon all of powers and dance around like mad," he says. But elsewhere he needs help navigating the world – like a security line at the airport. "He needs help to know how to take his belt off."

The audience support has been a massive boost for the band. "They're as heartbroken as we are," Kelly says. "You don't want the show to become a blubbering sapfest, but some of it does get to you."

It is entirely reasonable to expect some blubbering these next three nights as the band performs its final shows at the Commodore – a venue it has played more than 40 times over the years.

"It's home ice for us," Ditrich says from his hospital room. "It's our safe place. It's our favourite gig to play; it's where we feel most protected by the crowds."

Spirit of the West plays the Commodore Ballroom in Vancouver on April 14, 15 and 16. 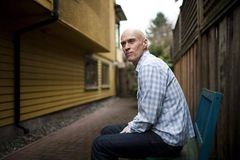